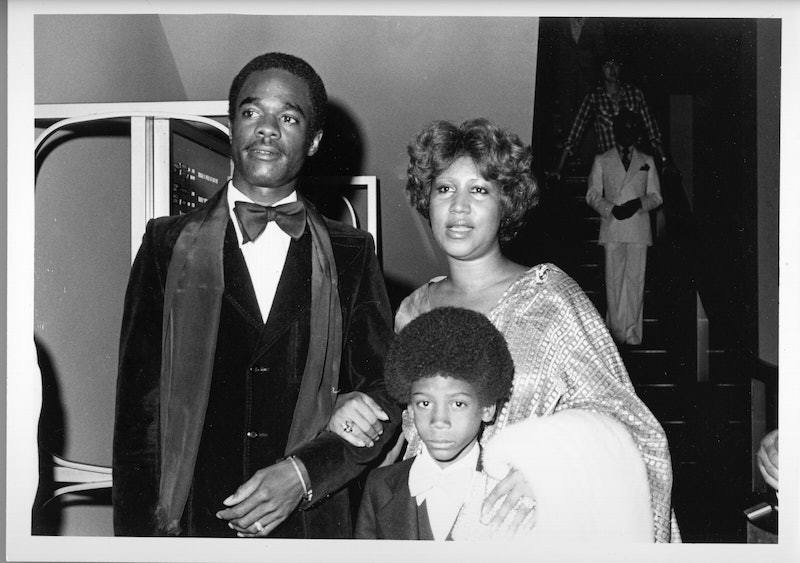 The new Aretha Franklin biopic, Respect, chronicles the singer-songwriter’s struggles and successes, including her relationships with her four sons: Clarence Franklin, Edward Franklin, Ted White, Jr., and Kecalf Cunningham. She didn’t talk often about her private life, but in a 2015 interview, she did speak briefly about her experience of motherhood as a Black woman: “My sons grew up pretty much the same way I did. Today, it’s different. Most mothers in the African American community are very concerned about their children and talking to them about how to conduct themselves.” All four of Franklin’s children have shown an interest in music, and some have gone on to have musical careers of their own.

After the singer’s death, Franklin’s sons were mired in a dispute over her estate. Initially, it was thought she didn’t leave a will, but two (or potentially three) handwritten ones were eventually found. As of 2019, the brothers were at odds about whether the wills were valid and enforceable, and how the estate should be divided between them. In 2021, a fourth potential will was found, further complicating matters.

But aside from their shared musical talents and their recent legal battle, what do we know about Aretha Franklin’s children? Below, meet the icon’s four sons.

Franklin was only 12 in 1955 when she had her first son, Clarence — named after her minister and activist father, Rev. C.L. Franklin. Clarence has written several songs, some of which Franklin went on to sing and record. It’s reported in court documents that Clarence has been diagnosed with mental illness and has lived in assisted living facilities. As of 2019, he was residing in a group home outside Detroit.

Although it was believed at the time of Clarence’s birth that his father was one of Franklin’s classmates, Donald Burk (sometimes reported as Burke), a handwritten will found after Franklin’s death named Edward Jordan, Sr. as the father. Jordan was described in Franklin’s autobiography as a “player,” and in one of Franklin’s wills it’s written that “[Clarence’s] father, Edward Jordan Sr., should never receive or handle any money or property belonging to Clarence or that Clarence receives as he has never made any contribution to his welfare, future or past, monetarily, material, spiritual, etc.”

Edward was born in 1957, and his father was also Edward Jordan, Sr. Franklin didn’t discuss her earlier pregnancies with reporters, and little else is known about Edward’s father. Both Edward and Clarence were raised by Franklin’s mother and sister in Detroit after Franklin’s career began to take off, although Franklin reportedly saw her sons regularly.

Edward has worked as a gospel singer, and has performed duets with his mother, even singing at her funeral. “I’ve worked with her before ... we knocked the song out in two or three takes,” he said when the two recorded Christmas music together.

Ted “Teddy” White, Jr., born in 1964, was the sole child Franklin had with her first husband and manager, Ted White Sr. White Sr. was allegedly physically abusive to Franklin; the two were married in 1961 when Franklin was only 19, and divorced in 1969.

Teddy now uses performs with last name Richards, as his father did; he was mostly raised by his father’s family. He played guitar for his mother for 30 years and is also a singer who’s been opened for performers like Seal and The Verve Pipe. He’s spoken about his mother’s iconic music and the significance of her songs — even divulging that his mother had a cold during the recording of her most well-known song, “Respect.” He still continues to perform.

Franklin had her youngest son, Kecalf, with her road manager Ken Cunningham in 1970. Kecalf’s name is an acronym for his parents’ names: Ken E. Cunningham Aretha Louise Franklin.

Kecalf — who sometimes goes by Kecalf Franklin — was also raised in Detroit with Clarence and Edward. He became a Christian rapper, and has also performed with his mother, including at Radio City Music Hall. He’s spoken about his mother’s life, legacy, and activism alongside his children Jordan and Victorie. When Genius: Aretha was premiered on National Geographic, he said that it was produced without the family’s consent. By contrast, he supports Respect and attended the premiere.