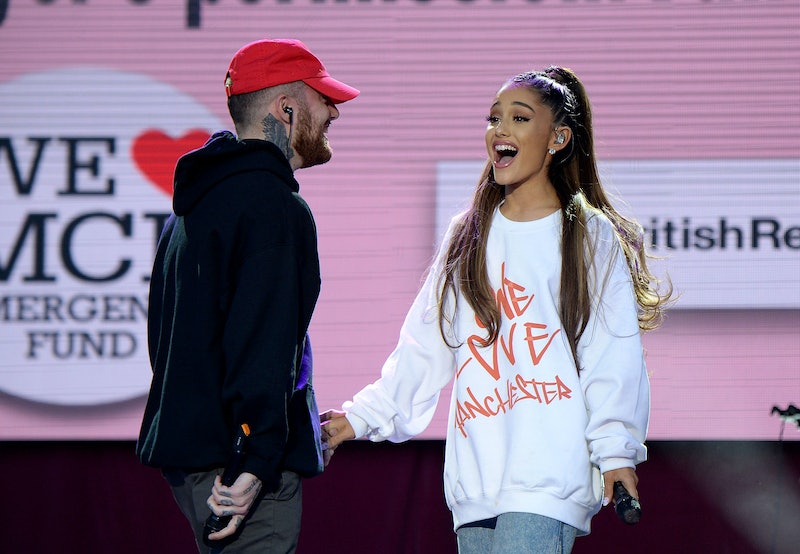 Nearly three years after rapper Mac Miller’s tragic death, Ariana Grande is still honoring her late ex. This time, the Grammy winner paid homage to Miller (real name: Malcolm McCormick) during Fortnite’s animated Ariana Grande Rift Tour, which aired in the United States on Friday, Aug. 6. While performing their 2013 song, “The Way,” mid-event, Grande’s avatar ascended a stairway to heaven, while the sound of Miller rapping his verse played in the background.

The nod may have been subtle, but it was enough to have emotional fans reaching for their tissues nonetheless. “I’m sobbing!” one viewer tweeted, while another added that hearing Miller’s voice “destroyed” them. Someone else even wrote that their tears caused them to get lost on the staircase, thus making them “cry more.”

Following in the wake of Travis Scott’s 2020 video game concert, Grande’s other performances included hits such as “Raindrops (An Angel Cried),” “7 Rings,” “Be Alright,” “R.E.M.,” and “Positions,” the latter of which may have included another Miller tribute. When Grande dropped her Positions album in October, sleuthing fans believed the singer played cricket sounds (a possible nod to Miller’s “Crickets” track) every time she sang the word “heaven.”

Grande and Miller, who also collaborated on the “Into You” remix, began dating in 2016, but the “Thank U, Next” singer confirmed their breakup in May 2018. Grande’s Instagram split announcement described Miller as one of her “best friends in the whole world and favorite people on the planet.” She continued, “I respect and adore him endlessly and am grateful to have him in my life in any form, at all times regardless of how our relationship changes or what the universe holds for each of us! ... Unconditional love is not selfish, It is wanting the best for that person even if at the moment, it’s not you.”

Following a history of drug abuse, Miller died from an accidental overdose at age 26 in September 2018. Since then, Grande has consistently paid tribute to her ex, both in her music and in other public remembrances. In July 2019, Grande called her grief “pretty all-consuming” in a Vogue interview. “By no means was what we had perfect, but, like, f*ck. He was the best person ever, and he didn’t deserve the demons he had,” she said. “I was the glue for such a long time, and I found myself becoming ... less and less sticky. The pieces just started to float away.”

Music has been a natural way for Grande to honor the late “Weekend” rapper, especially since she explained to Beats 1 host Zane Lowe last May that “nothing was more important” to her ex. “It’s just such a beautiful gift that he kind of touched the world with, and I think the thing he’d want most is for us to just appreciate it and not forget about it,” she said.

More like this
Beyoncé & Blue Ivy Performed A "Brown Skin Girl" Duet At Her Private Dubai Concert
By Brad Witter
Ariana Grande & Kristin Chenoweth Sing A Wizard Of Oz Classic On TikTok
By Alyssa Lapid
Linda Ronstadt’s “Long Long Time” Plays A Pivotal Role In The Last Of Us
By Brad Witter
Shakira’s Record-Breaking New Song Takes Direct Aim At Her Ex Gerard Piqué
By El Hunt
Get Even More From Bustle — Sign Up For The Newsletter
From hair trends to relationship advice, our daily newsletter has everything you need to sound like a person who’s on TikTok, even if you aren’t.