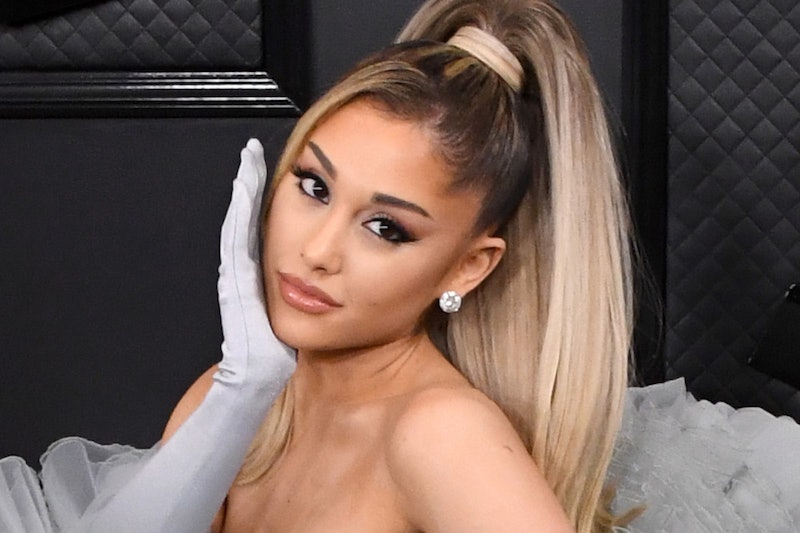 Get those thigh-high boots ready: Ariana Grande revealed a new album will be released this month. The "7 Rings" singer has indicated on Twitter that her sixth album, coined #AG6 by fans for now, will arrive sometime in October. She didn’t offer many details — or any details, really — but simply tweeted on Wednesday, Oct. 14, that she "can’t wait to give u my album this month." The tweet, of course, sent fans into a collective frenzy on social media, with even rapper Lil Nas X expressing his excitement with a meme.

Grande has been sporadically teasing a new album throughout the last few months on social media. The most recent indicator was a tweet from Oct. 7, in which Grande reminded her fans to cast their votes in the upcoming presidential election in November. She wrote that she was “turning in these mixes” and reminded people to register to vote and vote early.

In March, Grande shared a short snippet of a new song, presumed to be titled “Nasty,” on Instagram. "I just wanna make time for you, swear it's just right for you, like this p*ssy designed for you,” Grande sings on the track, which accompanied a video of a cloudy sky. In the caption, she wrote that she “[missed] making things” and “can’t wait to get back to work.”

Then, in September, Grande shared yet another brief snippet of a possible new track on Twitter, but this one was all harmonies, no lyrics. Audio teases aside, the most promising confirmation has come courtesy of Grande’s co-writer Tayla Parx, who penned “Thank U, Next” with the singer-songwriter. Parx told Insider last month that Grande has reunited with her former collaborators, confirming that they were working on a new record. "The 'Thank U, Next' crew did get back together over quarantine," Parx revealed.

"We just kind of let it happen naturally, same way as the last album," Parx added. "I think she has to tell you more about [the album] herself, but I can tell you she's made, yet again, another evolution," she continued. "I'm excited for her to tell you guys just more about where her head was at with this project, because it truly is incredible, honestly, and I can't wait for the world to hear it."

More like this
Ariana Grande & Kristin Chenoweth Sing A Wizard Of Oz Classic On TikTok
By Alyssa Lapid
The Jonas Brothers' New Album Has A Very Meta Name
By Alyssa Lapid
The Beyhive Is Mad At Harry Styles After Beyoncé’s Album Of The Year Snub
By Jake Viswanath
9 Photos Of Celebrity Couples & Unexpected Duos At The 2023 Grammys
By Jake Viswanath
Get Even More From Bustle — Sign Up For The Newsletter
From hair trends to relationship advice, our daily newsletter has everything you need to sound like a person who’s on TikTok, even if you aren’t.