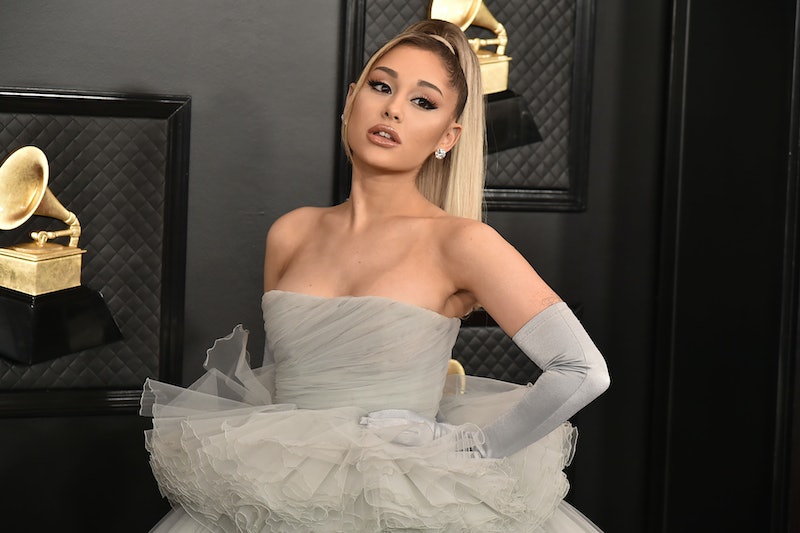 Forget virtual classrooms — Ariana Grande is here to educate the masses with Positions. Following the release of her sixth studio album and its particularly steamy lyrics, Ariana Grande fans are reacting to the NSFW meaning behind the track "34 + 35" with a mixture of shock and delight. The song, which is an unapologetic ode to sex and the many ways you can have it, features some of the album's most explicit lyrics. However, the title and chorus may require some listeners to brush up on their mathematics.

Those who have already heard the track would likely agree that subtlety was nowhere on Grande's radar while she was recording it. With lyrics like "you might need a seatbelt when I ride it" and "Got the neighbors yellin' "Earthquake!" / 4.5 when I make the bed shake," the pop star has truly lived up to the album's title. And much to fans' surprise, it seems that "Nasty" isn't the dirtiest song on Positions after all.

Of course, the crowning achievement of "34 + 35" is that it requires listeners to employ their knowledge of elementary school math to figure out what she's actually singing about. "Can you stay up all night? F*ck me 'til the daylight / Thirty-four, thirty five," Grande sings on the chorus. And once fans put 34 and 35 together — or waited until the very end for Grande to clarify that it "means I wanna '69' with you" — they couldn't hold back from sharing their reactions on social media.

Though Grande herself hasn't commented on the song or the big response it's received on social media, she did reveal on Twitter that she is incredibly proud of Positions. "I don't have a top three or anything," she wrote just before the album's release. "Everything goes hand in hand. This project is my favorite for many reasons and I really can't wait for it to be yours. Thank u for your love and excitement, it means the world to me."

She also hasn't revealed what inspired the album, but friend and frequent collaborator Tayla Parx told Insider back in September that the record marks a new "evolution" for the music icon. "We're just going to get to know her even more this time around, which I'm really excited for the world to see," Parx said. "I'm excited for her to tell you guys just more about where her head was at with this project, because it truly is incredible."

Producer Teddy Brown also revealed to WSJ that Positions was written and recorded during quarantine. In a May interview with Apple Music, Grande said that she was feeling creatively inspired during her time at home, although she didn't "feel comfortable" at the time to plan an album release. "It's a great time to create because you're stuck with your thoughts and left in your head a little bit, so I think all creatives are extra inspired right now," she said.

"I think as far as creating goes, it feels really good," she continued, later adding that she was just enjoying the process of making music without any pressure. "I've been making stuff. I've been making a lot of stuff, but [a big release is] not where my head is at right now." Thankfully, the singer ultimately decided to drop an album, complete with the sexy math jam they never knew they needed.