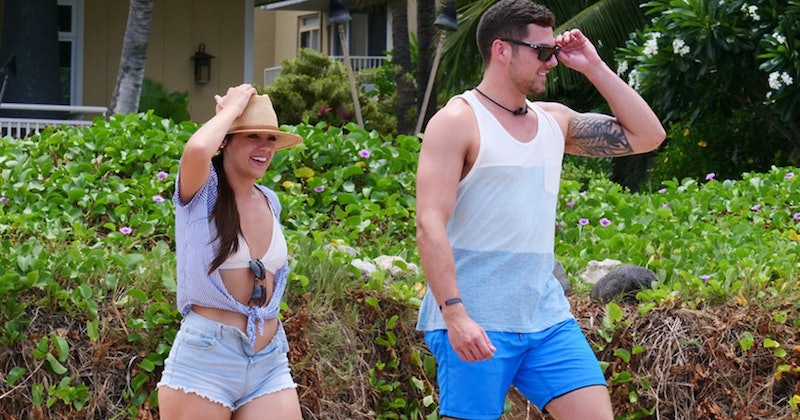 Looking back on Season 2 of Temptation Island, Ashley Howland compares her experience to attending summer camp — where camp-goers feel like the only people in existence and reality is an afterthought. "We're in a bubble," she tells Bustle. "Those are the people that you hang out with ... and people get their little crushes." Hesitantly, she's leading up to revealing that she and Ben are no longer together.

So what happened? On the island, the two couldn't keep their hands (or lips) off of each other, and Ben promised they would survive in the real world. According to Ashley, what happened was he changed. "It took like a 360. I'm not even kidding," she says. "We're not together. And he is a completely different person." Her tone grows defensive and frankly, over it. "He's a completely — I have such a strong, like, opinion on Ben now," she says.

On the show, she constantly wondered if she was catching feelings too quickly. "I did feel a little bit crazy," she says. "Looking back at it now, I mean, it's understandable. But my feelings have changed." She was repeatedly scared by Ben's kindness and optimism, hoping it was sincere. Unfortunately, according to her, it wasn't real at all. But it ultimately taught her a lesson about going too far, too fast.

"Get to know somebody really well before jumping into a relationship or thinking that you have it all," she says. "Because people will put on a face for you and tell you what you want to hear until it's inconvenient for them."

At the Temptation Island reunion, both Ashley and Ben shared more details about their breakup, and it's clear they don't agree about what happened. Ashley said he broke up with her after they dated "for like two days," and according to Ben, they ended things after she went home to collect her belongings, saw her ex Casey, and hooked up with him. Ashley denied that they hooked up and said they only kissed.

Regardless of how she and Ben split, Ashley says she's "single now for sure," and she's still in touch with Casey, who couldn't emotionally bring himself to attend the reunion. Right now, she's happy to have time to herself.

"You have to love yourself first, before you love anybody else," she says. "And that was one of the big things that I learned when I was over there was that, you know, kind of doing what you think is best for yourself, understanding who you are as a person."

In a Q&A on her YouTube channel, Ashley said she has no regrets about joining the show, even though she didn't want to originally. It opened her eyes to reality TV stardom, and she told her subscribers that her next goal is to be on MTV's The Challenge. "I am such a big competitor," she said. "You have no idea."

She’s yet to bring that dream to fruition, but she has been busy working on her made-to-order A-Line Swim collection. In January 2020, she also posted on Instagram that she was moving, and revealed several months later that she’d relocated from Los Angeles to St. Petersburg, Florida. It’s unclear whether or not she’s currently dating anybody.

Ben, on the other hand, is now in a relationship with a student anesthesiologist assistant named Megan. In February 2021, Megan belatedly celebrated Ben’s birthday and their anniversary on Instagram, calling the Temptation Island alum the “best partner a girl could ask for.” She also explained in the caption that they went from a long-distance relationship to traveling the country together, and so far, had lived in six states together and were about to move to another. (Although Ben hasn’t posted on Instagram since December, his bio lists Arizona as his current location.) “I’m excited for all of our future adventures,” she wrote.

More like this
‘The Ultimatum: Queer Love’ Is Officially On The Way
By Radhika Menon and Kadin Burnett
Here’s When You Can Expect More ‘Indian Matchmaking’
By Brad Witter
How To Follow All the 'Married At First Sight UK' Contestants On Instagram
By Sophie McEvoy
'Made In Chelsea's Liv & Tristan Are Hard To Keep Up With
By Sophie McEvoy
Get Even More From Bustle — Sign Up For The Newsletter