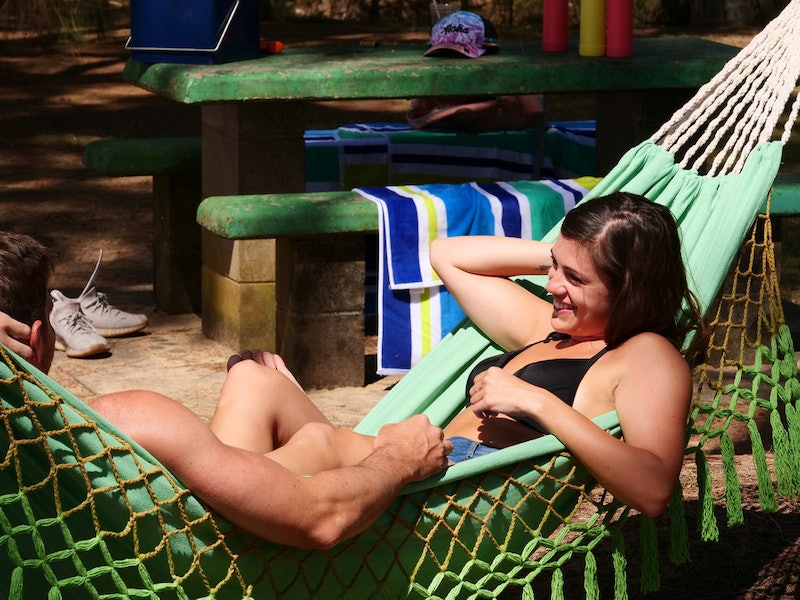 There may still be a few weeks left in the season, but Temptation Island's Ashley H. is already taking full advantage of her new platform. Not only has she accrued a large social media following, she's now running a YouTube channel and launching her own swimsuit line, among other things. Basically, she's become a full-on, full-time influencer.

This is pretty common for reality stars, which is why your favorite Bachelor contestants end up selling you detox tea on Instagram. But instead of starting a podcast, Ashley is building a brand (and no, not just a personal one). She's currently promoting her swim line, A.line Swim, which features four bikini styles. And according to the official website, the line was inspired by Ashley's Temptation Island experience.

"After I was on a television show I realized that I can do MORE," it reads. "I would have a hard time finding clothes that would fit me, let alone bikinis. Thats why I decided to create my own brand that would be comfortable and help women feel confident, beautiful, and happy in their own skin. I worked at this swim line for about 6 months and just launched the first swimsuit [in] October 2019. I hope my company grows as much as I have. I didn't think it was a real dream, but now that dream is coming true and that is to be my own BOSS."

To further pursue that dream, Ashley started her YouTube channel, where she uploads workouts, vlogs, fashion content, and more. She revealed in a Q&A video that she's now living in Los Angeles — notably not Florida, where she was living with Casey. But what's juiciest is her recent series reacting to the remaining episodes of Temptation Island Season 2.

In one video, she reacted to her first kiss with Ben, and then to her boyfriend Casey seeing them in bed together. Sitting in between her two friends on her couch with a glass of wine in hand, she may have even let a spoiler slip: "We weren't having sex that time," she said.

Naturally, Ashley hasn't revealed the fate of her and Casey's relationship, but her reactions to his presence onscreen were far from positive — and her friends didn't hold back, either. They were basically roasting him the whole time. Whatever happens in the rest of Ashley's Temptation Island journey, it definitely seems like she's not with Casey. Maybe her future YouTube videos will reveal more.