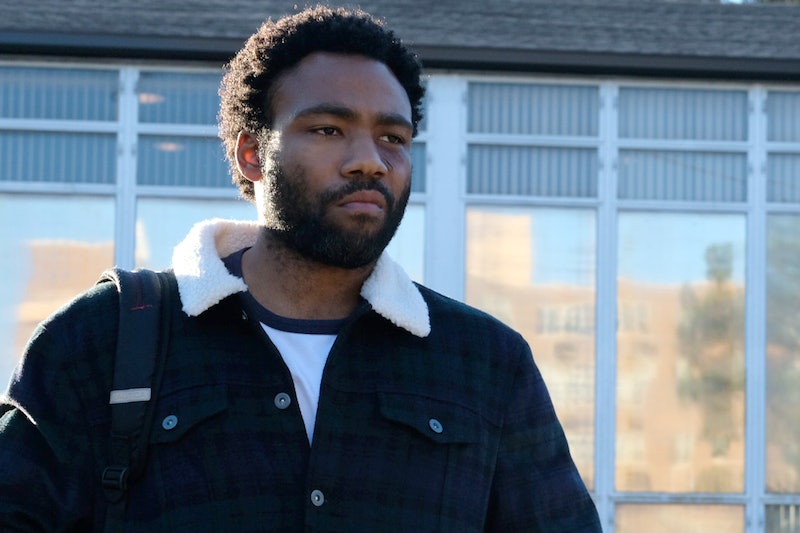 After nearly four full years offscreen, Atlanta will finally return on March 24. Season 3 will bring Paper Boi (Brian Tyree Henry), Darius (Lakeith Stanfield), and Earn (Donald Glover) abroad as they navigate a tour in Europe. But if you’ve forgotten how they got to this point, you’d be forgiven; a lot has happened since 2018. Here’s a recap of what happened in Atlanta Season 2 before you dive back in.

Season 2 introduced Clark County (RJ Walker), an energetic, condescending, and commercially successful rapper. He’s basically the antithesis to Alfred’s Paper Boi persona, as he’s willing to work the industry and play the part of the relatable rapper. For example, he has no issue recording audio for a Spotify-esque corporation while Paper Boi is incapable of hiding his contempt for consumerism.

It’s during their first meeting at faux-Spotify that Alfred and Earn’s relationship starts to sour. In one of their recording sessions, Alfred is introduced to Clark’s white, bro-ish manager Lucas (Matthew Barnes), who’s immediately positioned as a threat to Earn. Lucas jokes to Alfred that if Earn doesn’t work out, Lucas can step in to manage him. Later, Alfred learns that Lucas has a plethora of connections in the industry, which explains how Clark County got deals with Yoo-hoo and Fast and the Furious. To make matters worse, it’s Lucas — not Earn — who secures Alfred a slot on Clark’s European tour. However, it’s increasingly unlikely that Lucas will be joining the gang in Europe.

By the final moments of Season 2, Earn and Alfred’s relationship is in tatters. All season long, Earn has done virtually nothing to prove his worth as a manager, leaving it in question whether Alfred will keep him on. But a snap decision at the airport just as they’re about to set off for Europe turns that around. Earlier in the season, Earn took a gun away from his mentally ailing Uncle Willie (Katt Williams) with the intention of getting rid of it. However, he realizes it’s still in his bag while in the TSA line. Knowing that he’ll obviously get in serious trouble, he decides to slyly slip the gun into Clark’s bag. Later, on the plane, Alfred tells Earn that he knows what he did — and in a surprising turn of events, it’s exactly what Alfred needed from Earn to get back on his good side. “You my family, Earn. You're the only one who knows what I'm about. You give a f*ck. I need that,” Alfred says in the season’s closing sequence. He notes that people in the music industry only care about themselves — a point that’s solidified when Clark arrives on the plane, having placed blame for the gun on Luke.

Alfred has always wanted to keep it “real” and avoid selling out. But throughout the season, he struggles to adjust to his increased stardom. In Episode 2, “Sportin’ Waves,” he’s robbed by his longtime weed dealer, forcing him and Darius to find a new dealer. The problem? Alfred is too famous for anyone to act normal around him. Though he does eventually find a new connect, the dealer later sends Alfred a video of his girlfriend singing an acoustic cover of Alfred’s hit song, disgruntling Alfred further. Then, in Episode 8, Alfred is robbed by a bunch of would-be fans after getting into an argument with his materialistic girlfriend Sierra (Angela Wildflower). This leads to him ending up lost in the woods, battered, bruised, and conversing with what may be a houseless man or a figment of Alfred’s imaginative grief. When he finally makes it back to the city, Alfred takes a photo with a fan at a convenience store, finally accepting his newfound celebrity whether he likes it or not.

Season 2 marked a breaking point in Earn and Van’s (Zazie Beetz) relationship. In Episode 4, “Helen,” the couple leaves Atlanta and heads out of town to celebrate Fasnacht, a traditional German festival that includes a little too much Blackface. While there, a ping-pong game quickly turns into a back-and-forth argument. Earn feels like Van is always trying to make him someone that he isn’t, whereas Van feels like she goes out of her way for Earn but he doesn’t do the same for her. They throw barbs at each other, and Earn makes a comment about Van being unemployed, which leads her to shoot back: "I want to be in a committed relationship where I'm valued as a human being and not as an accessory that you can f*ck." Earn seems to be OK with their arrangement, but Van is over it.

Amidst all the crises going on with the other main characters, Darius remained the typical outlandish philosopher who has become the arhythmic heartbeat of Atlanta. As is usually the case, he mostly floated through the season, but also served as the muse for Season 2’s foray into horror when he had an encounter with the terrifying Teddy Perkins.