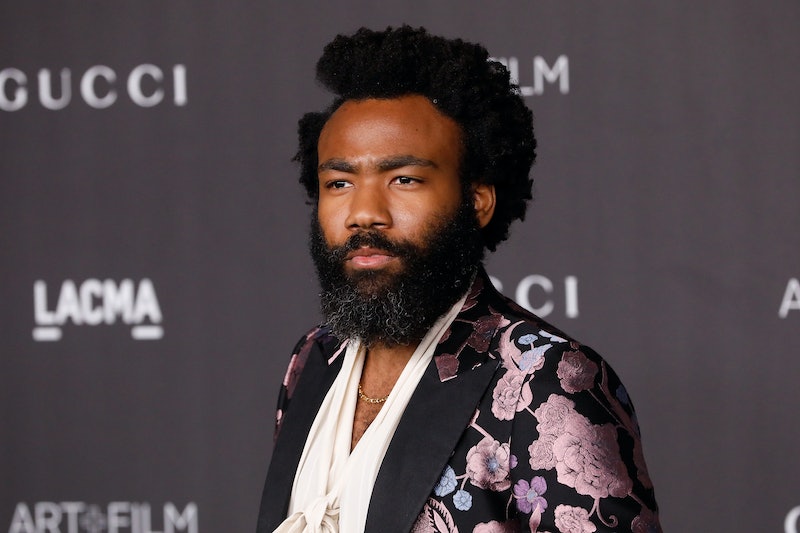 Atlanta fans won't be able to catch up with Earn, Paperboi, and Darius until 2021, but the show's creator and star promises that the new episodes will be more than worth the wait. In a series of tweets shared on Friday, Nov. 6, Donald Glover teased Seasons 3 and 4 of Atlanta as some of the "best television" to ever hit the small screen.

The actor and musician began by praising Atlanta alum Angela Barnes Gomes for directing a viral voting PSA in September, which recruited dancers from Georgia to encourage people to "get your booty to the poll" on Tuesday, Nov. 3. "Angela Barnes Gomes ('atlanta' alum) made those 'get ur booty to the polls' yall love/hated so much," Glover wrote on Twitter, adding that she originally asked him to take part in the project, but ultimately collaborated with his brother. "She asked me to rap on it, but [Steven Glover] is a better rapper...so."

Once he brought up his award-winning TV series, though, Glover couldn't help but tease the upcoming third and fourth seasons to fans on social media. “While I'm here: 'atlanta' s3+s4 are going to be some of the best television ever made,” he wrote, adding that The Sopranos is the only TV show that "can touch us."

Despite teasing that Atlanta will be revolutionary television, Glover didn't offer up any details about when, exactly, fans can expect to see those episodes. New episodes of Atlanta were pushed back due to concerns over the ongoing coronavirus pandemic, per Complex; the current plan is reportedly to begin filming the two seasons back to back in early 2021.

This is not the first time that Glover has promised big things for Atlanta Season 3. "I align the seasons I think, to me, like Kanye records," he told reporters at an Emmys screening party, per IndieWire. "I feel like this is our Graduation. This is probably our most accessible but also the realest — an honest version of it — and I feel like the most enjoyable, like the third album. We were all on iMessage together and kind of talking about it, and I think people were really hungry to like beat ourselves, which is great."

Star Lakeith Stanfield echoed those sentiments in February 2020, telling People that Season 3 will have a much lighter tone than the previous installments — particularly, the avant-garde Season 2. "It reflects the world we’ve been living in," he told the outlet about the upcoming episodes. "A lot of stuff’s been going on, a lot of craziness and we’ll find a way to help you laugh through it hopefully."

In addition to promising big things for Seasons 3 and 4, Glover took some time to tease his next musical project, which will be released as Childish Gambino. While he acknowledged that his "last music project [Awaken, My Love!] was probably my best," the rapper and actor shared that "the one coming will be my biggest by far." Glover concluded by saying that "there is a lot (of magic) coming" in the next couple of years: "Y'all thought I was hot in 2018." Fans clearly are not ready for what Glover has planned for 2021.

More like this
Linda Ronstadt’s “Long Long Time” Plays A Pivotal Role In The Last Of Us
By Brad Witter
Hilary Duff's Husband Matthew Koma Has Her Name Tattooed On His Butt
By Jake Viswanath and Stephanie Downs
This 'Emily In Paris' x Blackpink Crossover Is Beyond Iconic
By El Hunt
Taylor Swift Visited The 'Glee' Set For This Bizarre Season 5 Episode
By Grace Wehniainen
Get Even More From Bustle — Sign Up For The Newsletter
From hair trends to relationship advice, our daily newsletter has everything you need to sound like a person who’s on TikTok, even if you aren’t.