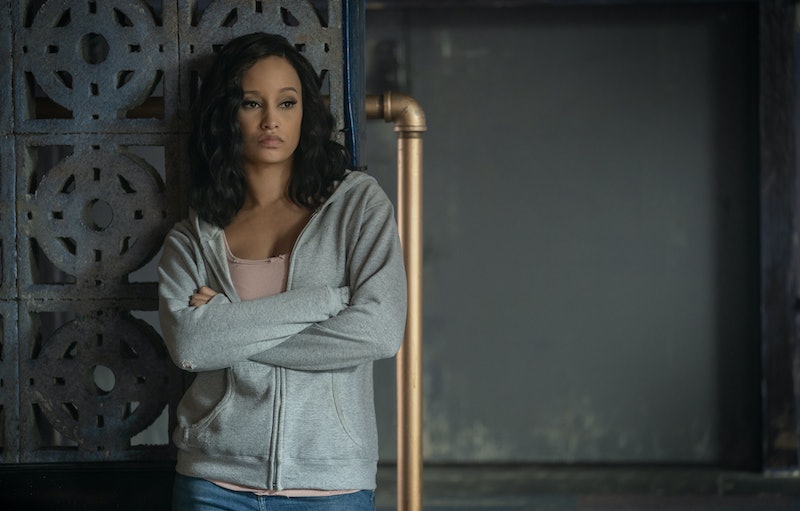 Starz's newest drama P-Valley follows strippers at a club called the Pynk in Mississippi. The events of the series open when Autumn Night (Elarica Johnson), a woman with a mysterious past, becomes the club's newest employee. And though P-Valley's Autumn isn't based on a real person, Elarica Johnson said in a promotional video that her character's unflappable strength "represents a lot of women that I know."

Audiences don't know much about Autumn's past when P-Valley begins, but it's obvious that she needs a fresh start. "She's our mysterious girl, and with that, having to hide this secret and running away from something, there’s this chameleon effect almost," Johnson told Brief Take. "Having to change the way she looks, having to take on these different identities in order to keep her secret."

And while P-Valley is fictional, the setting was inspired by creator and showrunner Katori Hall's childhood. She said in a promotional video that in Memphis, where she grew up, strip clubs were part of her "coming-of-age," explaining that they weren't "something to be ashamed of. You go to have birthday parties at strip clubs. It is the center of so much social activity."

After taking a pole dancing class, which Hall told the New York Times was "hard as hell," she became intrigued by the world of professional strippers. "I was like, I can use theater to be able to comment on and excavate this world," she recalled. Over the next six years, Hall said that she interviewed over 40 women. Her ensuing play was called Pussy Valley, which has now been adapted for TV with a more censored title.

And while the P-Valley characters are, by all accounts, fictional, Hall told Philly Metro that she views them as her "ancestors and [her] descendants all at once." The showrunner continued, "Historically, Black folks have been dehumanized by stereotypical imagery, so I've always felt it my responsibility to... paint us as the complicated beings we are. I wanted to look in the mirror that I know media can be and see not only my reflection, but my family's."

It was important to Hall not just to destigmatize these women, whose stories she told Metro are "worthy of being told with empathy, heart and respect," but also to depict them from a distinctly Black, female gaze.

This women-led depiction was important for Johnson, who told Digital Spy that so often, strip clubs are shown through the male lens. "But the female gaze that Katori talks about is so huge because it's a whole different world," she said, explaining that this perspective "makes so much more sense than saying, 'Okay, these are the men that go into the clubs, and... this is what they think they know. Well, here is the truth. And here are these women.'"