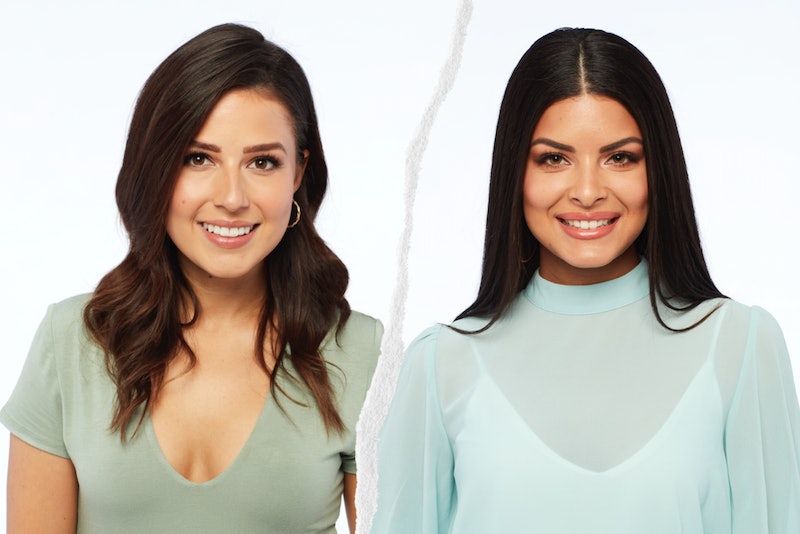 There's some unexpected drama brewing on Season 25 of The Bachelor. This week, during The Women Tell All, fans were caught off-guard when the women began turning against fan-favorite contestant Katie Thurston, blaming her for the "toxicity" in the house. A quick refresher: Katie clued Matt James in on the bullying of the newer contestants, which some of the women thought started even more drama. And it seemed like Katie's conversations with Matt didn't please fellow contestant Mari Pepin. After the Women Tell All special, Mari set the record straight for Bachelor Nation through a string of Instagram comments, cryptically claiming that there's more going on than they currently know.

It all started with a comment left on Mari's Instagram page. "Genuine question: why did you and the other ladies feel like Katie was causing the toxicity?" asked a viewer. "Is there something we’re missing?" The Bachelor contestant replied with an enigmatic statement: "There is a lot that is missing that unfortunately will never come to light."

In addition to the questions for Mari, fans also shared their opinions on the episode in her comment section. Some told the contestant she was too easy on "Queen" Victoria Larson, and others scolded her for coming to MJ Snyder's defense. Mari wasn't having any of the criticism and issued a swift response.

"Locking this down because I’ve said what I have to say on the topic and I don’t have the energy to keep entertaining people who will find something negative to say no matter what. So, let me clarify once and for all: I wholeheartedly and without a doubt condemn bullying," wrote the 24-year-old. "I will not and did not defend anyone’s harmful words or actions... Clarifying that someone isn’t fake or can have positive attributes is NOT the same as defending or excusing behavior."

Attempting to clear up the drama, Mari tried to clarify that she wasn't upset with Katie for telling Matt about what was going on. In another comment, she instead claimed the root of the spat was at the beginning of the season when Katie was unhappy with contestant Sarah Trott. She wrote:

"My comments to Katie had nothing to do with her bringing things to Matt – I commend her for standing up. My comments WERE to do with her mistreatment of Sarah and subsequent switch up based on a discussion about their families (not altruism), and that only. Please remember there is so much you don’t know and that you don’t get to see, so you will NEVER fully understand these situations. Lastly, do your part to be a better human being. Buenas noches."

While Katie hasn't voiced her opinion on the drama just yet, she let the contestants know during The Women Tell All that any social media backlash they've received is "karma" for their actions. Fellow contestants Chelsea Vaughn and MJ Snyder expressed their love and support for Mari in her Instagram comments. For further developments, we'll have to tune into the next episode of The Bachelor on Monday.

More like this
Brianna Revealed Why 'The Bachelor' Premiere Was Tougher For Her Than You Saw On TV
By Brad Witter
'RHOSLC' Star Jen Shah Refuses To Do A Post-Sentencing Interview With Andy Cohen
By Brad Witter and Jake Viswanath
Zach Swears He Didn’t Look Up Contestants Before The Bachelor Began Filming
By Brad Witter
The Bachelor’s Christina Mandrell Comes From One Of Country Music’s Most Famous Families
By Brad Witter
Get Even More From Bustle — Sign Up For The Newsletter
From hair trends to relationship advice, our daily newsletter has everything you need to sound like a person who’s on TikTok, even if you aren’t.