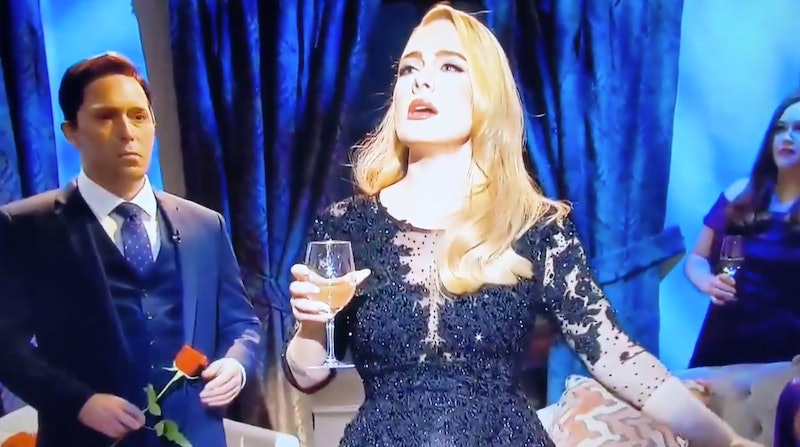 If there's one thing that Saturday Night Live loves spoofing, it's the The Bachelor. While the parodies can sometimes feel like a retreading of the same old jokes — yes, we know all the contestants are relatively young — the Oct. 24 SNL episode offered a more musical take with a Bachelorette skit featuring Adele. She played a contestant on the show who kept belting out songs like “Hello" and “Someone Like You" at the most hilariously inopportune times.

Adele began the skit by joking about her own album titles, noting that romance didn't quite work out for her at 19, or even more famously at 21, or most famously at 25. "But I have a really good feeling about Ben," she said, referencing Beck Bennett's Bachelor character. "I can already tell he's going to be the next love of my life."

Naturally, Adele's prediction didn't pan out. After Ben gave the rose to "Hannah C.," Adele segued into a beautiful rendition of "Someone Like You," amusingly ignoring Ben's pleas to stop. And the musical performances didn't stop there.

When Ben complimented Adele, she began singing "When We Were Young," to which Ben mumbled in the background, "We met today." When one of the other contestants — "Hannah B." — finally got some alone time with the Bachelor, the British singer was quick to intrude with "Hello."

"Ok Adele, it has not been years since you've seen Ben," Hannah B. complained. "You've been singing to him all night!" Adele apologized, only to reappear in the bushes to continue the song.

Referencing her emotionally devastating discography, Adele eventually admitted that she's maybe too overwhelming for Ben, so she'd instead play it "chill and cool." Of course that lasted for all of a second, with Adele cracking a glass and singing "Rolling in the Deep" because another contestant asked to "steal Ben away for a second." ("OK, I am a huge fan but I don't feel safe with her here," another contestant tearfully said to loud audience laughter.)

When Ben asked Adele to leave the mansion, she closed out the skit with the rest of "Someone Like You," to the obvious glee of everyone on stage and in the audience. Adele may have claimed in her opening monologue that she didn't want to be the host and the musical guest, but of course she found a way to do both.