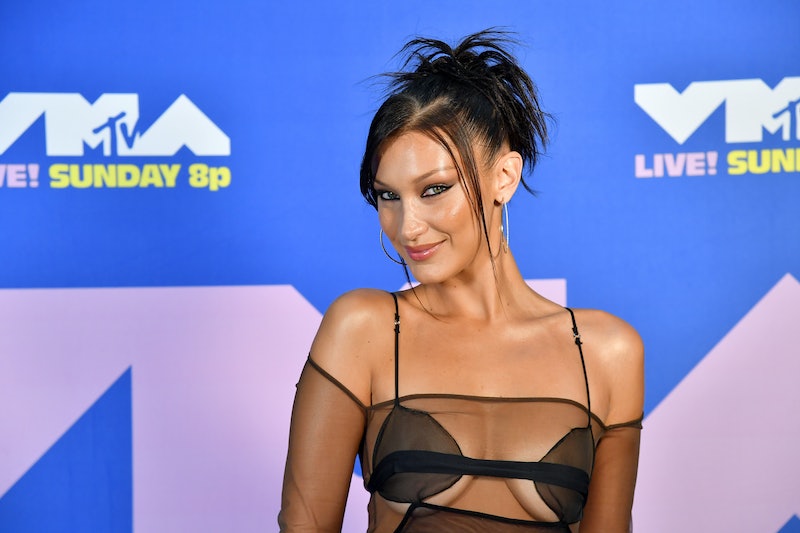 Bella Hadid is known for her tiny tattoo collection, and this week she debuted two new Arabic script tattoos on each of her shoulders. The designs were inked by celebrity tattoo artist Dr. Woo, who posted an image of his work on Nov. 22 on Instagram. "Some writings for the always kind and lovely @bellahadid," he wrote on the post.

The designs are located on the upper outside of both of her shoulders. Neither Hadid nor Dr. Woo have elaborated on the meanings of the tattoos, but one Instagram user translated the scripts as "I love you" and "my sweetheart/my love." As they noted, the second script is meant to be addressed to a woman. It's not clear who the tattoo is for, but it's likely either a reference to self-love, or to Hadid's appreciation for the women of her culture as a whole.

"I love Arab women. They’re so strong and incredible," Hadid told Harper's Bazaar Arabia in 2018. "That’s how my teta was and all of my aunts on my dad’s side. They’re all very strong women and I think that’s what’s so beautiful about an Arab woman.”

Regardless of who they might be for, the pieces are clearly a personal tribute to Hadid's Palestinian heritage, which she's often expressed pride in. "I am proud to be Palestinian," she once wrote on an Instagram story, per PEOPLE.

In the Harper's Bazaar Arabia interview, she described how her father, Mohamed Hadid, first came to America as a refugee. "He came from Palestine to America when he was a baby. Thankfully, he was able to come, but it was very hard and now it’s probably 100 times harder," she said.

It was her dad who helped keep her connection to her culture alive. “He would teach us about it and we would go and do Eid with my family and we would do Ramadan – I did that since I was a kid," she continued. "Once I got older I was working and going to school so I couldn’t fast for as long. My dad, he’s so passionate about it, and that’s what kept me very passionate and excited about my roots.”

Recently, Hadid showed off the new ink in a Nov. 20 Instagram post, captioning the picture simply as "Home." While she does have three other tattoos (two small wings and a rose), the Arabic scripts are Hadid's largest to date — a fitting tribute to her identity.