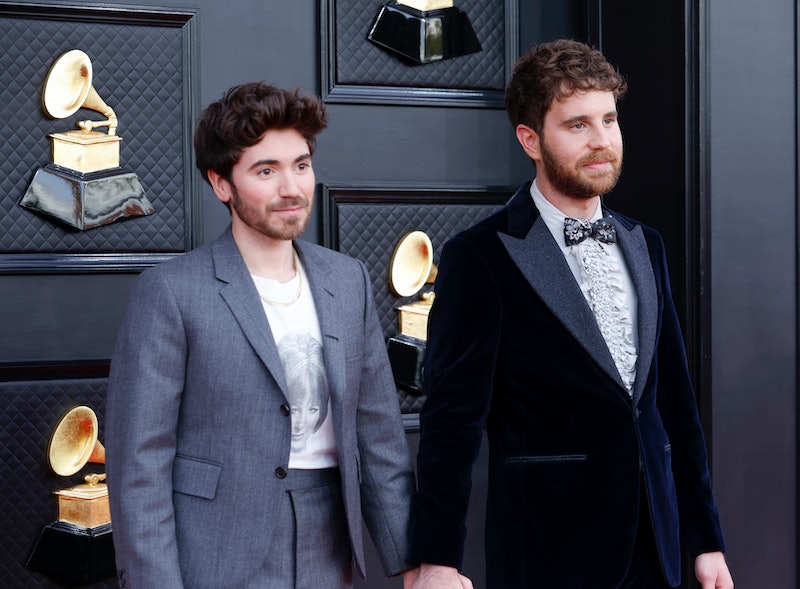 The friends-to-lovers romance of Ben Platt and Noah Galvin just reached a lovely milestone. The two Broadway stars — who each played the lead in Dear Evan Hanson — announced their engagement with coordinated Instagram posts on Nov. 25. Each included a set of adorable, romantic photos, which offered a look at Platt’s candlelit proposal and Galvin’s beautiful new ring.

Platt’s pictures began with the two gazing adoringly at one another after he popped the question. He captioned the post, “he agreed to hang out forever,” adding the two hearts emoji. Other photos included a closer look at Galvin wearing the ring and two sweet images of them basking in their post-engagement joy together. Galvin included three of the same photos, plus a selfie of the couple that showed him flashing his ring. “I said yeehaw and then cried for like 7 hours,” the Good Doctor star wrote.

Their famous friends quickly joined in the celebration by commenting on their Instagram posts. “Wow!!! CONGRATULATIONS!!” Reese Witherspoon wrote to Platt, while Ariana Grande added numerous pleading-face emojis. Lin-Manuel Miranda commented, “Mazel mazel,” and Beanie Feldstein wrote, “I AM SO HAPPY AND HAVENT [sic] STOPPED CRYING.” Laura Dreyfuss, one of the Dear Evan Hansen cast members who starred with both halves of the couple, commented, “YESSSSSSSSSSS LOVE YALL SO MUCH!!!!”

Galvin’s post got more emojis from Grande, plus Feldstein also wrote, “it’s just so special.” Ariana DeBose shared her congratulations, adding, “so happy for you both!!!!!” and Jordin Sparks wrote, “Omg congratulationssss!”

Platt’s sister, Samantha Auerbach, was just as excited as their high-profile friends were. He reposted her Instagram story welcoming Galvin to the family, and it showed that Auerbach and her family already love him. “You’ve been our brother/ Uncle Noah in our hearts for a long time now,” she wrote. “As you can see, we’re somewhat thrilled that it’s official.”

The ring that made it official came from Grace Lee, a custom engagement ring designer. Galvin showed it off in his Instagram story, tagging Lee and adding, “KILT IT.” His new ring appears to be a gold diamond signet with emeralds on either side of the center stone.

Their engagement comes after more than two years of dating. During a 2021 appearance on The Kelly Clarkson Show, Platt explained that they were friends for years before they coupled up, per Buzzfeed. “We were friends for five years, and right before the pandemic, we finally decided to really give it a shot,” he said. They “skated around it for a long time,” he added, and then went from “0 to 60.” The Tony winner also said, “I didn’t see the light for a long time, and then I realized, you know, that he was the guy.”

And now, as he said after popping the question, they get to hang out forever.

More like this
Michael B. Jordan Tackled His "Public Breakup" With Lori Harvey On 'SNL'
By Brad Witter
Who Is Pete Davidson Dating? He & Chase Sui Wonders Got Caught Kissing
By Jake Viswanath
Who Is Allison Williams Dating After Her Divorce? She’s Engaged With A Child
By Jake Viswanath
Who Is Murray Bartlett Dating? 'The Last Of Us' Star Is Extremely Private
By Alyssa Lapid
Get Even More From Bustle — Sign Up For The Newsletter
From hair trends to relationship advice, our daily newsletter has everything you need to sound like a person who’s on TikTok, even if you aren’t.