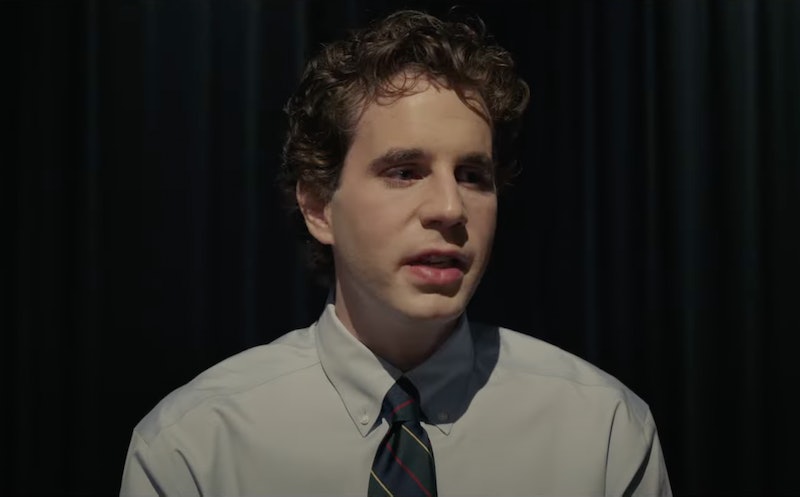 YouTube/Universal Pictures
By Emlyn Travis
May 18, 2021

Today is an amazing day for musical theater fans and Ben Platt stans because the first trailer for the Dear Evan Hansen movie has dropped with seemingly no warning on May 18. The clip incited a barrage of memes and tweets, some of which poked fun at the 27-year-old actor for portraying a high school student.

The upcoming film adaptation of the beloved Broadway musical, which won the Tony Award for Best Musical in 2017, will see Platt don the iconic blue striped polo shirt and arm cast once again as the film’s titular character. Platt will be joined by a star-studded cast, including Julianne Moore, Amy Adams, Amandla Stenberg, Kaitlyn Dever, and Nik Dodani. Platt originated the role of Evan on Broadway and took home the Tony for Best Performance by a Leading Actor in a Musical in 2017 for his take on the shy, socially anxious teen.

The film tells the story of Evan, a high schooler who is encouraged by his therapist to write letters to himself about the good things that will happen each day. When one of his letters is taken by fellow student Connor Murphy (Colton Ryan) shortly before his death, Evan finds himself weaving a complex web of lies after claiming to be one of Connor’s closest friends. What initially begins as an attempt to comfort Connor’s family quickly spirals out of control.

Upon the release of the trailer, Twitter promptly exploded with excited reactions, support for the cast, hilarious memes, and a lot of tears from fans who are eagerly awaiting the release.

Others gave a special shoutout to the phenomenal cast. Last August, it was revealed that Stenberg had joined the film’s cast as Alana Beck, one of Evan’s friends, and that the role would be expanded upon and include an original song written just for the film.

Twitter users also began to create memes centering around how Platt looked “too old” to be a playing a high school student. It’s something Platt is conscious of too. Platt shared with Vanity Fair that he was cognizant he “wasn’t going to stay teen-adjacent forever” and it felt “urgent” to shoot the film before he officially aged-out of the role. That hasn’t stopped fans from creating their own hilarious reactions.

No matter the reaction online, fans of the musical will definitely be found seated in theaters with popcorn in hand when Dear Evan Hansen is released on Sept. 24. Dear Evan Hansen is directed by Stephen Chbosky, who wrote the impactful teen novel The Perks of Being A Wallflower.

More like this
You Might Want To Rewatch 'Elvis' For This Britney Spears Easter Egg
By Grace Wehniainen
Photos Of The 'Elvis' Cast vs. Their IRL Counterparts Will Have You All Shook Up
By Grace Wehniainen
Taylor Swift's “Carolina” Theme For 'Where The Crawdads Sing' Soundtrack Is Here
By Jake Viswanath
What Is Elvis Presley’s Net Worth? How The King Earned & Spent His Fortune
By Grace Wehniainen
Get Even More From Bustle — Sign Up For The Newsletter