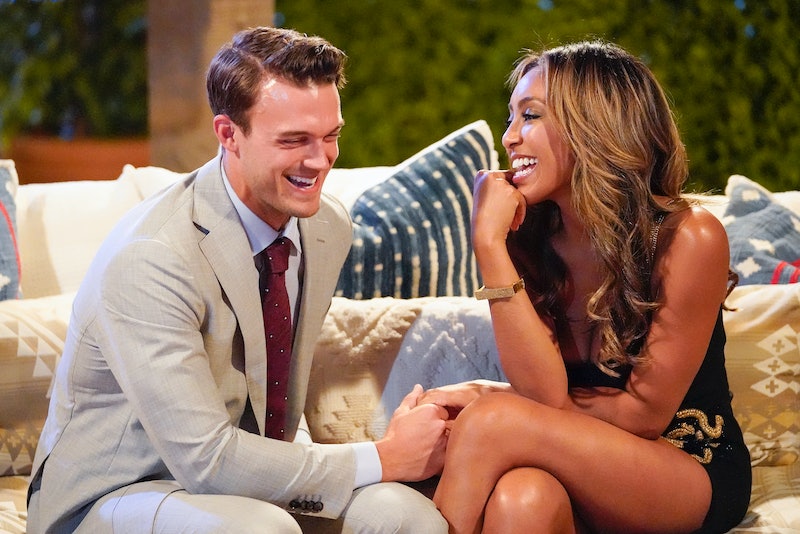 Though he admittedly struggles with being open and vulnerable, Bachelorette contestant Ben Smith has been at the center of some of this season's most moving conversations. During an emotional one-on-one date with Tayshia Adams, Ben opened up about his suicide attempts and revealed his sister saved his life by supporting him when he was in a "dark" place after leaving the Army in 2018. "The Army didn’t work out for me for a number of reasons," Ben said, adding that he had broken his back and felt "completely lost" without his career in the military.

"My life was very dark, and I didn’t know how to say I needed things," he admitted. "I didn’t wanna be here anymore — for the same reason I don’t like to share [my vulnerabilities] — because I didn’t want to burden anyone with my problems. I thought the easiest way was for me to just not be around." Ben revealed that in both 2018 and 2019, he made an attempt to take his life but was unsuccessful. He ultimately credits the support of his sister and being "very intentional and aggressive with therapy" with helping him out of that dark place. "She saved my life, and I owe her everything," Ben said.

Ben's admission resonated very deeply with many fans watching at home, who praised him on Twitter for sharing his experience and opening up about his mental health:

Ben's statements about his past were especially moving because he admitted that he often feels like he would be "burdening" others by sharing what he's going through. "I was raised in a house where being a certain way was expected. I had everything I needed materially, [but] I think often I was left wanting emotionally," he told Tayshia during their date. However, it seems like he's happy that he could finally share his struggles with another person, saying that "the person you see today isn’t that person" anymore.

Tayshia was also happy that Ben trusted her enough to confide in her and said she was "so incredibly happy [he's] here." During a previous interview with Insider, Tayshia explained how the veteran became a "completely different person" after sharing his story. "The things he was trying to not bring to the surface, they were big conversations, and I think that's why he was holding back so much," she told the outlet. "I think once he finally opened up, it was just a completely different person. It was like a weight had been lifted off his shoulders. It did take us a hot minute to get there [but] I knew there was so much more to him."

Ben has been slowly sharing more and more of himself with Tayshia and the Bachelorette audience over the course of the season; after (literally) baring all during the art group date, he revealed that he had an eating disorder for 15 years. "The life I've lived is different than what you might assume," he said during the cocktail party, telling Tayshia that he hid this part of his life from everyone but his sister. "She saved my life," Ben continued. "I'm finally at a place now where I feel safe and comfortable with the people that I live and work with. I care a great deal about this. It's just hard for me to let it out."

As hard as it may be for him to share his past with others, Ben is doing whatever he can to spread love and positivity to everyone who may need it through his social media presence. Through his personal accounts, he frequently reminds his followers that “the world is better with you in it" and encourages them to "be nicer to people."

If you or someone you know is experiencing suicidal thoughts, reach out to someone you trust or call the National Suicide Prevention Hotline at 1-800-273-8255 or text HOME to the Crisis Text Line at 741741. You can also reach out to the Trans Lifeline at 877-565-8860 or the Trevor Lifeline at 1-866-488-7386, or to your local suicide crisis center. You can find more resources about suicide prevention at the National Suicide Prevention Lifelineor the American Foundation for Suicide Prevention. You can also find a local suicide crisis center near you here.