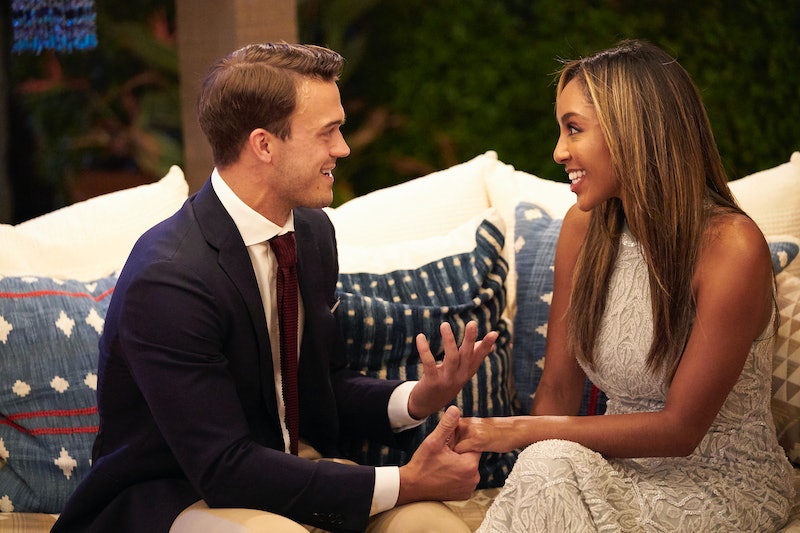 After years of petty fights, accusations that people aren't there for "the right reasons," and eating way too much deli meat, the contestants on Tayshia's season of The Bachelorette are offering fans something completely different: real, genuine conversations about social issues and past trauma. While there have been the requisite arguments — ironically about things like "emotional intelligence" and being a "grown ass man" — for the most part, the men on Tayshia's season have proven that when you don't cast a bunch of 20-year-olds who are looking to becoming influencers, you get more honest and impactful TV.

Due to the fact that many of the men were originally chosen as potential matches for Clare Crawley (who, at 39, is the oldest Bachelorette in franchise history) and the delayed production schedule due to the pandemic, the men on this season are vastly different than in the past. They're older, they're serious about finding love and settling down, and most importantly, they understand that being open and vulnerable is one of the most attractive qualities a potential life partner can have. Yes, it's nice to watch two attractive people fall in love on TV, but it's much more interesting if they're also having substantive conversations about the things that are important to them in the process.

On almost every one-on-one date that Tayshia has had thus far this season, the men have shared a more emotional side of themselves with her and the world. Brendan opened up about getting married and divorced at a young age, Ivan and Tayshia shared their experiences of being biracial and reflected on the Black Lives Matter movement, and Zac revealed that he overcame harmful substance use and now works to help other people on their journey to sobriety.

And the group dates have been just as insightful. Riley shared his story about his parents' divorce and being estranged from his mother, Army vet Ben revealed that he had an eating disorder, and Bennett talked about his past engagement ending. Even Jason, who left the show after Tayshia took over as Bachelorette, was open and honest about his reasons for leaving, telling both the guys in the house and Tayshia herself that sharing so much of himself with Clare really took a toll on him.

While he was debating whether or not to leave, he had real conversations about his emotions with the other men, most of whom appear to have formed genuine bonds and are supporting one another as they open up. Brendan even praised Riley for sharing on the art class group date, despite the fact that they were all theoretically competing for a rose at the time. All of these moments of honesty and vulnerability aren't just important because they're unusual for The Bachelorette, but because they represent a side of men not often portrayed onscreen.

These guys aren't any weaker or less masculine for opening up; they're still sexy and funny and romantic, and in fact are more attractive because of how candid they're being. "This is what happens when you start dating real men," Tayshia said after all of the men on her group date had bared their souls. And this is also what happens when The Bachelorette casts adults.