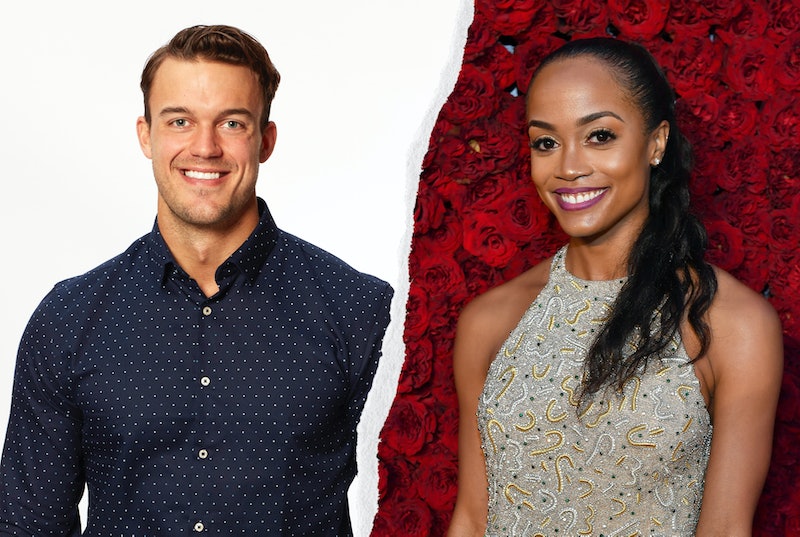 Former Bachelorette Rachel Lindsay did not mince her words last week when she cautioned producers not to cast Ben Smith as the next Bachelor. In addition to claiming that Smith is "desperate" to become the show's new lead, Lindsay said that he's calculating "certain moves to get to that point." But now, Ben — who made a notoriously unemotional exit from the show last week — has responded to her comments in the most Ben way imaginable.

In a paparazzi video posted by TMZ on Monday, Dec. 21, the Season 16 contestant was walking outside of his gym in Los Angeles. When the outlet asked him whether or not he'd like to be the next Bachelor, Smith played it cool, giving nothing but a shrug in response. The reality star also offered little response when asked about Rachel's comments specifically, saying, "I have no reaction."

Ben's response (or lack thereof) comes less than a week after Lindsay compared him to her season's runner-up, Peter Kraus, on The Bachelor Happy Hour podcast. "He reminds me of him in the way that he gives you just enough, but if you really break down what he's saying, it doesn't match up," she told co-host Becca Kufrin. "So, it's like, 'I don’t believe you.' Like, I'm into you. I like you. I feel it, but there's something that I can't explain that's not adding up here."

Lindsay also discouraged Bachelor showrunners from casting Ben as the lead after Matt James' upcoming season. "Ben 1,000% wants to be the Bachelor, [but] I beg producers, please don't do it," she said. "We've been here before with the person who is so desperate to be the lead, [and] it never works out." The lawyer added, "Don't pick him. I don't want to see it."

Ben, who was one of Tayshia's four front-runners, was sent home after failing to express his true feelings. While fans were shocked to see the personal trainer leave, there are rumors that he might return during the two-part finale and profess his love for the star. Tayshia even teased his return on her Click Bait podcast last week, saying that "there are still things that are going to happen that you guys have no idea about." And in the teaser for the finale, Tayshia receives a mysterious knock on the door. "It's the final three — or is it?" a voiceover says.