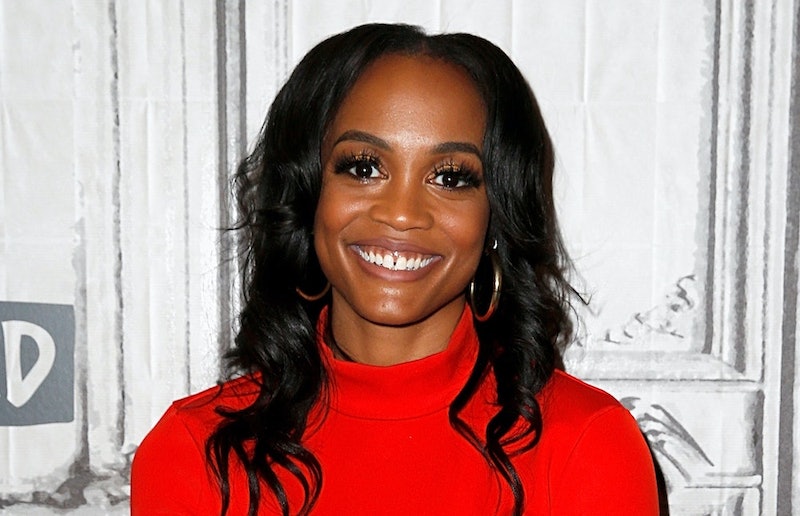 Former Bachelorette Rachel Lindsay does not want Ben Smith to be the next Bachelor. On Wednesday's episode of the Bachelor Happy Hour podcast with co-host Becca Kufrin, the lawyer sounded off on Tuesday's dramatic episode of The Bachelorette — one that saw Tayshia Adams send home frontrunner Ben due to his inability to articulate his emotions. Rachel had stern words of caution against even considering Ben as a potential Bachelor contender, comparing him to her former frontrunner Peter Kraus along the way.

"He does just enough to stay by," Rachel said of Ben. "He reminds me of Peter Kraus. He reminds me of him in the way that he gives you just enough, but if you really break down what he's saying, it doesn't match up." The lawyer added, "So, it's like, 'I don’t believe you.' Like, I'm into you. I like you. I feel it, but there's something that I can't explain that's not adding up here." (Peter was the runner-up on Rachel's season of The Bachelorette, but the two parted ways after he didn't propose.)

Similar to Ben, Bachelor Nation rallied behind Peter to become the Bachelor after his elimination, but it never came to fruition. "Ben one thousand percent wants to be the Bachelor, [but] I beg producers, please don't do it," Rachel said. "We've been here before with the person who is so desperate to be the lead, [and] it never works out. When they want it so badly, when they've been planning for it, calculating, [making] certain moves to get to that point and then you give it to them, it always messes up."

Lindsay added that there are many great men from Tayshia's season that would be better suited for the role. "Don't pick him," she said of Ben. "I don't want to see it."

While Ben's elimination came as a shock to fans, a new teaser for the two-night finale suggests that he just might pull a Bennett Jordan and return to profess his love. In never-before-seen footage, Ben sits on a couch with Tayshia and tells her, "I've never felt this feeling, but I'm in love with you." Elsewhere in the teaser, Tayshia receives a knock on a door that insinuates a surprise visit. "There's a rose ceremony," Tayshia says. "What do I do with that?"