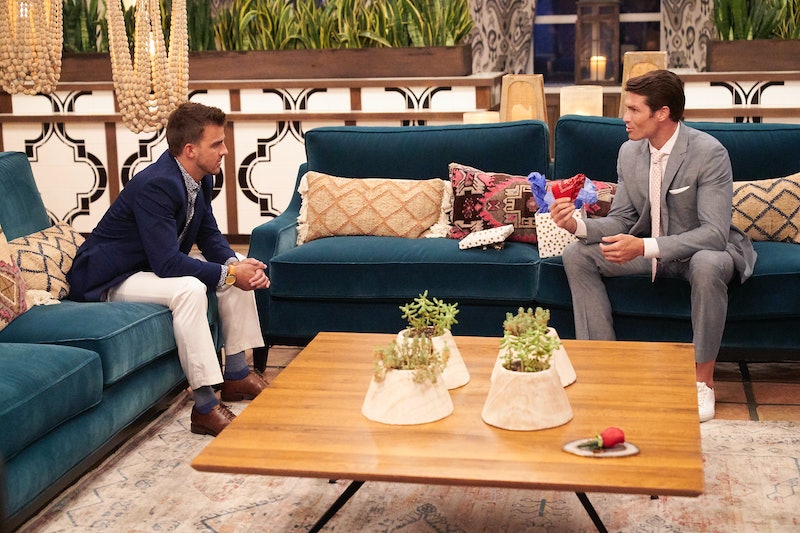 The Office's Michael Scott may have met his match in Bennett Jordan from The Bachelorette, who gave his rival Noah Erb a "peace offering" that's just as cringe-worthy as Michael's "Suck on This" rock parting gift to Toby Flenderson. Before being sent home by Tayshia Adams, Bennett attempted to make amends with Noah with three admittedly petty and insulting items: a red bandana, because he hoped for no continued "bad blood" between them, a pair of used-but-cleaned mustache-printed socks to remind Noah that "the only place you should wear mustaches is your feet," and a book on emotional intelligence, which Bennett has repeatedly said Noah lacks.

When Tayshia saw the gift box on the table upon rejoining them, the tension in the room grew. It was obvious that she, too, found the gifts petty, which is partially why she ultimately sent Bennett home. "It worries me that you are condescending in the way that you talk to people and that you question my intentions," she told him.

Bennett assured her that he never wanted to offend but was being honest about his feelings. “He’s acted like a young child throughout this entire process, and I think that he’s not ready to be anyone’s husband or father at this point," he replied, referring to Noah. "I was not questioning you." Still, the damage was done, and Tayshia's mind was made up, so she walked Bennett out.

When Tayshia rejoined Noah inside, he sported a smug expression and a mouth full of mints, ready for his victory smooch. But Tayshia had other plans — to express her equal disappointment in him and remind him who's in charge. "Don't be smiling," she said shortly. “That wasn’t a victory for you by any means.” And the crowd went wild.