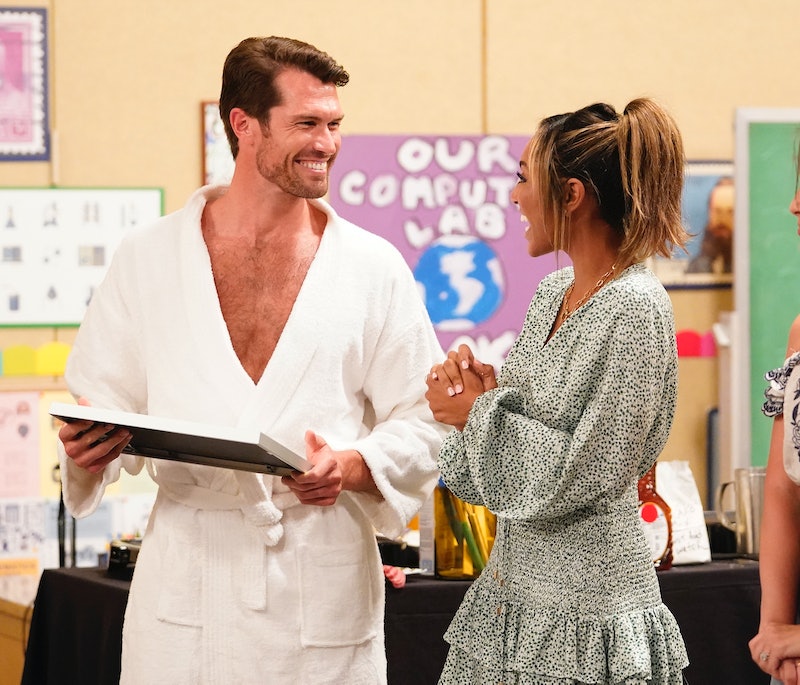 Even though fans' initial reaction to Bachelorette contestant Bennett Jordan was less than enthusiastic, the green juice-loving financial planner has grown on some viewers. Maybe it's his resemblance to Clark Kent (a comparison that Bennett himself has thoroughly enjoyed), or perhaps it's his impressive loafer collection — either way the proud Harvard alum is a Bachelor Nation favorite.

At the moment, Bennett's future on the show is unclear. The trailer for next week's episode shows that Bennett may be back after Tayshia Adams sent him home for being "condescending" and questioning her judgment. Tayshia later admitted she wasn't ready to send him home, so there's still a chance he could creep back into the resort.

Since filming for The Bachelorette wrapped, Bennett has been enjoying his newfound fame – he even appeared on a recent episode of Jimmy Kimmel Live to prove that he really can spell. Hopefully the Harvard admissions team can rest easy knowing he redeemed himself from spelling "limousine" wrong during the "Grown Ass Man" group date.

Although Bennett currently lives in New York City, lately he's been spending time with his family (and some animal friends) in his hometown of Atlanta, Georgia.

Along with posting photos and videos from his time on the show, Bennett has been using Instagram to document his jade roller obsession, his morning yoga practice, and how the holidays inspire him to reflect on his favorite OutKast tracks. Last week he said several followers asked him for his green juice recipe, so he happily obliged and shared that as well.

As Bennett's relationship with Tayshia hangs in the balance, it's safe to assume that no matter the outcome, he'll continue serving looks on Instagram and tagging #TheBachelorette, #BachelorNation, and #TheBachelor in every single post for the foreseeable future.

More like this
‘The Ultimatum: Queer Love’ Is Officially On The Way
By Radhika Menon and Kadin Burnett
Here’s When You Can Expect More ‘Indian Matchmaking’
By Brad Witter
Here's What Happened After Rachel & Aven Left The 'After The Final Rose' Stage
By Grace Wehniainen
Here's Exactly When Rachel & Tino's Fight Happened After 'The Bachelorette'
By Grace Wehniainen
Get Even More From Bustle — Sign Up For The Newsletter

This article was originally published on Dec. 1, 2020