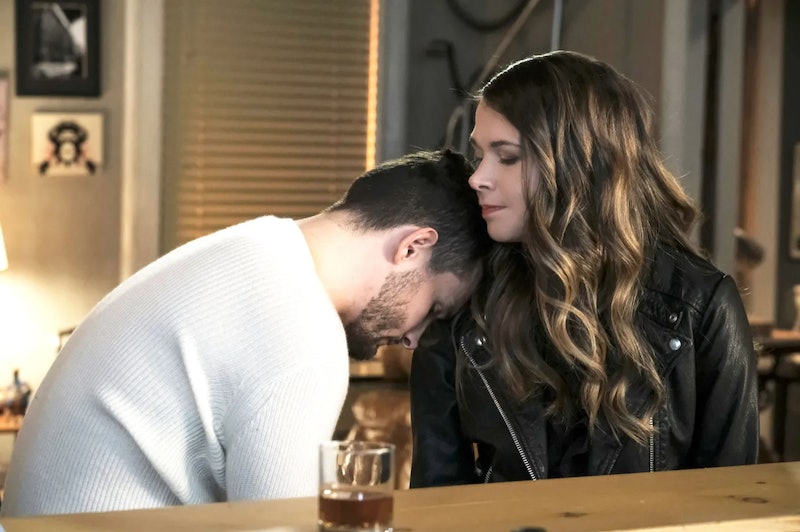 Season 7 may be taking them in a different direction, but Liza and Josh’s relationship on Younger is one of the foundations of the series. After all, it’s Josh who first gave Liza the idea that lying about her age is something that could work for her. Whether or not Liza ends up with him in Younger’s final season, she and Josh are important to each other, and their best episodes together reflect that. Here are the essential ones to (re)watch if you’re still holding out that they’re endgame.

After meeting, flirting, and being wracked with guilt over whether or not she should tell Josh her secret, “The Exes” is the first time Liza has (“really really good”) sex with Josh, and also when she starts taking her feelings for him seriously. Sure, it comes at the cost of having to see him hooking up with another woman, and she’s still lying about her age. But by the end of the episode, the two seem to be in a more serious place.

After getting high at Lauren’s “Hot Mitzvah” and telling each other “I love you,” Liza tells Josh her secret...which naturally freaks him out. As he’s doubting that anything they had was real, Liza gives him a USB flash drive with photos of important moments from her life throughout the years and tells him that she’s not thinking “they’ll be picking up where they left off,” just that she wants a second chance to introduce herself. He introduces himself back and they walk off to get a cup of coffee.

Younger understands that some of the best love stories have a lot of back and forth, which is exactly what “No Weddings & a Funeral” captures for Liza and Josh. After Liza’s big lie comes between her and Josh for most of Season 2, the season finale sees them coming back together for “mourning” sex after Thad’s funeral. Even though Josh pushes Liza onto the fire escape when his girlfriend comes over, he admits that he still feels deeply for her. At the end of the episode, he says he’s “all in” on their relationship.

By Season 3, Younger’s love triangle is in full swing, with Liza more aware of her growing feelings for Charles. This episode is arguably an important step for that relationship, but it’s just as sweet for Team Josh fans. When Liza gets in a bicycle accident, Josh rushes to the hospital and stays close to her bedside.

By this point in the show, Josh and Liza clearly see a future together. He’s asked her if she wants kids again (she doesn’t) and she’s defended their relationship to her ex-husband, who’s been trying to rekindle their relationship (another thing she doesn’t want). But as they rack their brains for relationship “firsts” that they can do together, Josh is feeling like he “can’t compete” with all the years that Liza was married. Liza realizes exactly what she needs to do: let Josh design and give her first tattoo.

Liza is called to Ireland to be a witness at Josh’s wedding to Claire. Between her dancing and her heartfelt speech in defense of the couple, Josh remembers just how much he cares for Liza. He comes to her hotel room and tells her the wedding is off; together they spoon through the night.

Ultimately Claire and Josh do get married, but Josh confesses that his reasoning is partially to put some distance between him and Liza. It’s counterintuitive, but it’s a big episode for Team Josh fans as a reminder of just how much the two mean to each other.

When Josh is confronted with the choice to sign a 10-year lease or vacate his Inkburg space, he feels overwhelmed and like he doesn’t have anything to steady him. Enter Liza, who tells him “You’ve got all of us; Maggie and Kelsey, and you’ve got me.” It’s not quite enough for a drunk, wallowing Josh. So when Liza visits later and sees the Inkburg sign being taken down, she’s terrified, dashing up to Josh’s apartment and promising to always be in his life.

It turns out that he was just getting a bigger sign and had already signed the lease, but the celebratory hug Liza gives him lasts a while and leaves both of them with a satisfied smile.

Liza and Charles, now dating, attend a micro-dosing retreat to compete for an author’s business. While there, they run into Josh, and the LSD — well, it makes for an exciting trip for Liza, even at a micro level. She has a dream dance with both Charles and Josh, mixes up their voices, and admits (to a plant she mistakes for a nurse) that she’s still thinking about what it’s like to have sex with Josh.

Liza and Josh have the easy chemistry you just can’t fake. So it’s no surprise that at an Infinitely 21 ad campaign shoot, the photographer catches it. From the minute Josh shows up to the shoot, they are both all smiles and smooth rapport. It’s the sort of moment that makes you think Liza and Josh will always be friends...and maybe more.

As Josh and Liza both struggle to make sense of a world in which she’s cut him out of her life, Josh has a chance to monetize his tattoo work in a big way when the Infinitely 21 rep he’s working with loves the tattoo he did for Liza. Though he pushes back on sharing it, he softens a bit since Liza shunned him. But Liza isn’t so quick to let go of their past, telling him, “If it’s all the same to you, that tattoo—it’s ours … I wouldn’t want anyone else to have it.” It’s a sign for him that no matter how they define their relationship, he and Liza are always going to have a meaningful place in each other’s lives.