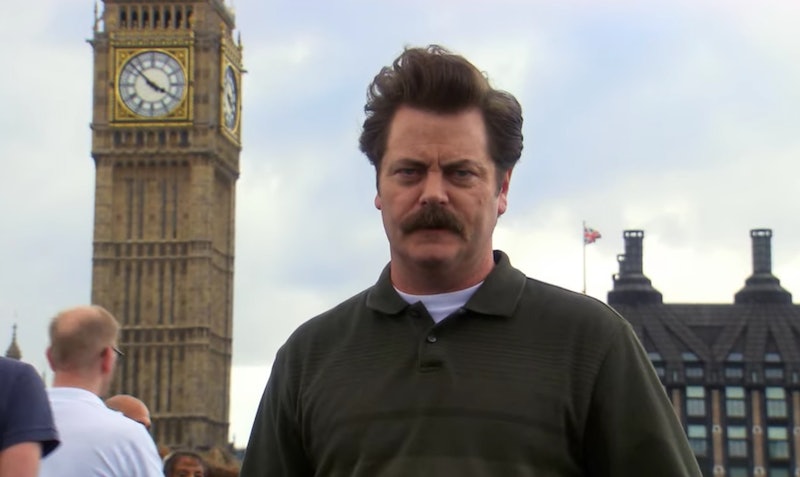 Parks & Rec fans rejoice, because all seven seasons of NBC's much-loved municipal comedy is landing on Netflix UK today (Feb. 1). Yes, that means it'll be easier than ever to catch up on all the jokes, pranks, town council meetings, and trips to JJ's Diner. And in celebration of this wonderful news, we've decided to take a look back at a Parks & Rec episode that will be particularly memorable for any British fans of the show: the gang's trip to London.

Although Parks & Rec is all about Pawnee, the department do manage a few trips outside of America's fourth most obese city from time to time. Who can forget Leslie and Ben's thoroughly unsexy road trip to Indianapolis? Or what about the time they all spent in Washington (when Leslie got the chance to meet a particularly important political figure)? But the adventure that takes them the furthest outside Pawnee – and, in my opinion, the one with that yields the most hilarious moments – is at the beginning of season six when Leslie, Ben, April, Andy, and Ron fly to London to attend the a summit for the International Coalition of Women in Government.

Between Ron's disdain for anything remotely European and Leslie's obsession with British rom-coms, this episode really has some of the funniest clips in Parks & Rec history. Check out our top 10 highlights below.