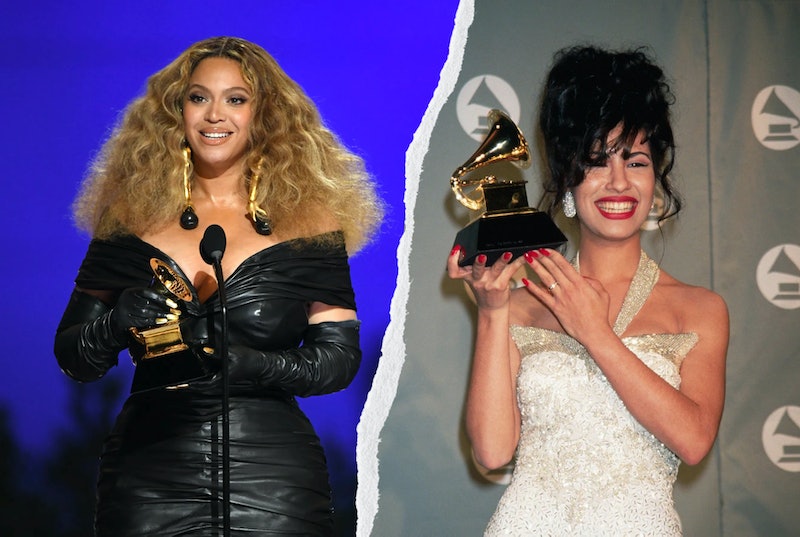 One of the most heartwarming moments from Selena: The Series Part 2 involves an unexpected fellow pop icon: Beyoncé. In the sixth episode of the Netflix show, which focuses on Selena Quintanilla’s life before her tragic death, a young girl is stunned when she sees the Mexican singer walking through an outdoor mall as her family heads to a frozen yogurt shop. Her mother pushes her to go up to her idol and says, “Beyoncé Knowles, you better learn not to be afraid of people if you ever wanna be famous too,” creating a surprising reveal. And as it turns out, the scene wasn’t just written for dramatic effect.

In 2007, Beyoncé revealed to MTV Tr3s that she actually did meet Selena at The Galleria mall in her hometown of Houston, and much like her younger self in Selena: The Series, she was too starstruck to do anything. “I didn't say much to Selena because I wasn’t a celebrity, and I just saw her and said hello and kept it moving,” she recalled in the interview. Honestly, if I met Beyoncé, I’d likely do the same out of pure shock.

The Destiny’s Child alum went on to explain the impact that Selena had on her as a child in Texas, where the late singer also resided. Selena even helped her when she was recording her 2007 EP Irreemplazable, made up of Spanish re-workings of songs from her 2006 album B’Day and original duets with Spanish artists.

“Growing up in Texas, I heard her on the radio, and I think listening to her album, even though I didn't know exactly what she was singing, it helped me in the studio with my pronunciation,” she said. Beyoncé went on to call her a “legend” and express how much she admired her. “She was so talented, so I’m very happy that, even though she didn't know who I was, I’m still so excited that I got that opportunity,” she said.

Fans on Twitter celebrated the onscreen union between a young Beyoncé and Selena at the peak of her powers, while pointing out how Netflix dramatized the moment as well. In the series, the scene is filmed at an outdoor mall that looks nothing like The Galleria. Young Bey also tells her mother Tina Knowles to be quiet, something she wouldn’t dare to say in real life.

Now, on the extremely slim chance that we ever come across Beyoncé in real life, we know how to handle it — or not, depending on how you look at it.

More like this
Here’s Everything Coming To & Leaving Netflix In February
By Jake Viswanath
At 28, Debra Jo Rupp Was Living A Much Different '70s Show
By Grace Wehniainen
Here’s Why Danny Masterson’s Hyde Isn’t In 'That '90s Show'
By Brad Witter
Everything To Know About The 2023 Grammy Awards
By Jake Viswanath
Get Even More From Bustle — Sign Up For The Newsletter
From hair trends to relationship advice, our daily newsletter has everything you need to sound like a person who’s on TikTok, even if you aren’t.