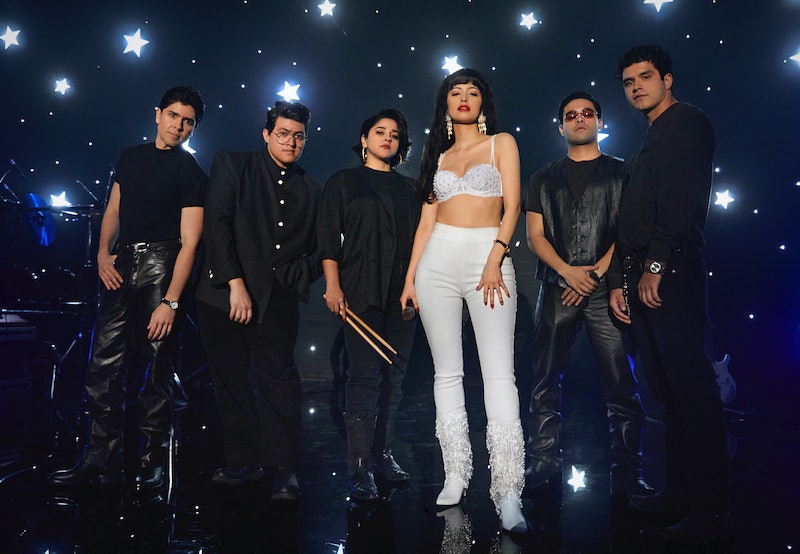 In one of the most anticipated new Netflix series of 2020, the story of Mexican-American singing legend Selena Quintanilla was told anew in Selena: The Series. The limited series premiered its first six episodes on Dec. 4, but those episodes don't mark the end. The December installments only represented Part 1 of the series, with Selena: The Series Part 2 to follow in the future.

The first part of Selena: The Series focused on Quintanilla's childhood and early career, showing the humble beginnings of the girl who would eventually become known as the "Queen of Tejano Music." The series was developed with input from Selena's family, and the late singer's sister and former drummer, Suzette Quintanilla, served as an executive producer.

Christian Serratos, who portrays the iconic musician in the series, recently spoke to Bustle about preparing for the role. “I knew what an incredible fan base she had — me being a part of that fan base. And I just wanted to honor her and her legacy, and her family, and her fans as much as I could,” said the actress, noting that the singer has inspired her personally. “I just love how honest [Selena] was, how graceful she was and how determined she was to accomplish her goals. And I think those are great qualities for anybody to model.”

With Part 1 covering the "young girl from Texas" portion of the story, as Netflix described, expect Part 2 to delve into the "most successful female Latin artist of all time" angle — and cover the singer’s life through her tragic murder in 1995. Here's what else to expect from Selena: The Series Part 2.

After previously announcing that Selena: The Series Part 2 would arrive on Netflix on May 14, the streaming service announced on April 2 that the collection of episodes is now set for release on May 4 — more than a week earlier than expected. In the announcement video, Serratos is seen performing “Bidi Bidi Bom Bom” as Quintanilla in the iconic sparkly purple jumpsuit that the singer wore during her last concert at the Houston Astrodome on Feb. 26, 1995.

The almost-entirely Latinx cast should remain largely the same for the second installment. Serratos will obviously be back as Selena, as well as Ricardo Chavira as Abraham Quintanilla (Selena's father), Seidy Lopez as Marcella Quintanilla (Selena's mother), Gabriel Chavarria as A.B. Quintanilla (Selena's brother), and Noemi Gonzalez as Suzette Quintanilla. With Part 2 shifting to later in Selena's life and career, fans should also expect an expanded role from Jesse Posey as Selena's husband, Chris Perez.

The woman who murdered Selena, Yolanda Saldívar, aka the former president of her fan club, will appear, and she will be played by actress Natasha Perez. She opened up to Entertainment Weekly in Dec. 2020 about the difficulties of preparing for the role. “I remember working with the director on the scene and she asked me how I was feeling. I told her I was feeling conflicted,” said Perez. “The actress in me is fascinated by the journey of a complex character, but the human in me has all sorts of feelings. The actress in me is also worried for her safety.” She continued, “A lot of people take this very seriously and think that it's real, and in this case, the character is real, but it's not me. I'm not her.”

While many fans are surely excited about another retelling of Selena's story, some are criticizing the series for perpetuating the exploitation of a murder victim. In a critical piece about the series for Vice, Alex Zaragoza wrote:

"Selena's story is territory that has been thoroughly and properly covered, particularly in the 1997 film Selena starring Jennifer Lopez and Edward James Olmos. Unfortunately, Selena: The Series doesn't bring anything new to the table. It's also concerning that the story repeated to us most is that of a woman who was violently murdered. That's part of Selena's myth, but it inevitably fuels her exploitation."

Perez also spoke to EW about approaching the topic of Selena’s murder in the series, noting that it was done with sincere care and respect for the singer’s family.

“The series isn't about her death. Yolanda is there to add tension to what's going on, but what's going on is so beautiful because it's an artist finding herself, an artist emerging and finding her place within her family, and society. Everyone was very careful with how it was all handled. Unfortunately, Yolanda is a part of Selena's tragic story. But the beauty of it all is how her legacy continues until today through her music, her art, and really, her whole life.”

With Selena's murder sure to figure into the second half of the series, don't be surprised to see more discussion surrounding the issue when it does finally premiere.