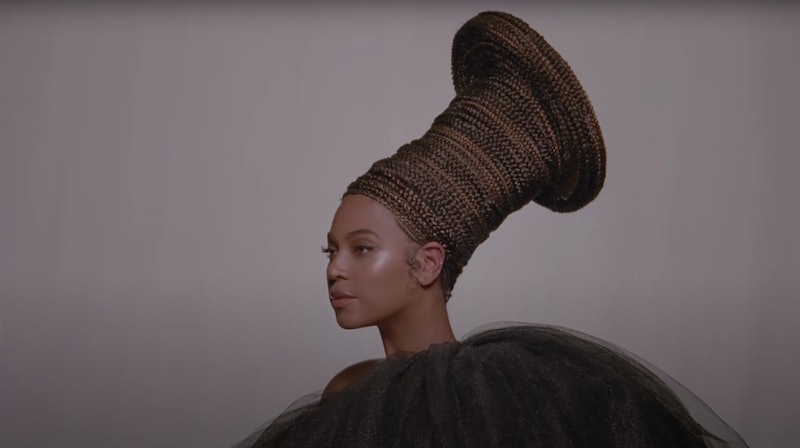 With two weeks to go before the visual album premieres on Disney+, Beyoncé shared a new trailer for Black Is King, teasing appearances from Jay-Z, Kelly Rowland, Pharrell Williams, Tina Knowles-Lawson, Lupita Nyong’o, Naomi Campbell, Aweng Ade-Chuol and Adut Akech. The new project, which was written, directed, and executive produced by the star, will be based on the music from the 2019 album The Lion King: The Gift. Beyoncé voiced Nala in the CGI remake of the Disney film and composed the companion album.

In June, Disney announced Black Is King in a press release, revealing the project would have, "lush visuals that celebrate Black resilience and culture" and a message that, "highlights the beauty of tradition and Black excellence." Black Is King was filmed across many locations, including New York, Los Angeles, South Africa, West Africa, London, and Belgium, according to the press release. Reflecting its global shoot, the visual album also secured an exclusive distribution deal that will make it available on much of the African continent, including South Africa, Nigeria, Ghana, Ethiopia, Namibia, Cameroon, Liberia, Burundi, Senegal, Togo, and more.

On Sunday, Beyoncé offered the first major glimpse at the film with the new trailer, which follows, "a young king’s transcendent journey through betrayal, love, and self-identity," as per the press release. "You were formed by the heat of the galaxy," Bey says in the trailer's voice over. "What a thing to be, both unique and familiar, to be one and the same, and still unlike any other." She adds: "Life is a set of choices — lead or be led astray. Follow your light, or lose it."

Beyoncé worked with several noteworthy collaborators on the visual album, including her go-to music video director, Jake Nava, her longtime collaborator Kwasi Fordjour, and "This Is America" creative director Ibra Ake, as well as filmmakers Pierre Debusschere, Jenn Nkiru, and Dikayl Rimmasch, as per the official press release. Disney previously described the film as being, "a celebratory memoir for the world on the Black experience," and confirmed it would include full-length videos for new songs “Already,” “Brown Skin Girl,” “Mood 4 Eva” and “My Power,” which is previewed in the new trailer.

Black Is King isn't the only recent project from Queen Bey. In June, Beyoncé dropped her single "Black Parade" on Juneteenth. She also debuted BeyGOOD, a Black-Owned Business Impact Fund, an initiative to support small businesses in partnership with the NAACP. Luckily, even more content is on the way for the Beyhive, and the upcoming film promises to be yet another stunning visual album from the artist. Black Is King premieres on Disney+ on July 31.

More like this
You’ll Definitely Recognise Isadóra Bjarkardóttir Barney’s Mum
By Maxine Harrison
Twitter Is Saying The Same Thing About Beyoncé's Renaissance World Tour
By Shahed Ezaydi
How To Buy Tickets For Beyoncé’s UK Renaissance Tour Dates
By Shahed Ezaydi
Stephen Graham & Steve McQueen Are Working On A Wartime Drama
By Darshita Goyal
Get Even More From Bustle — Sign Up For The Newsletter
From hair trends to relationship advice, our daily newsletter has everything you need to sound like a person who’s on TikTok, even if you aren’t.