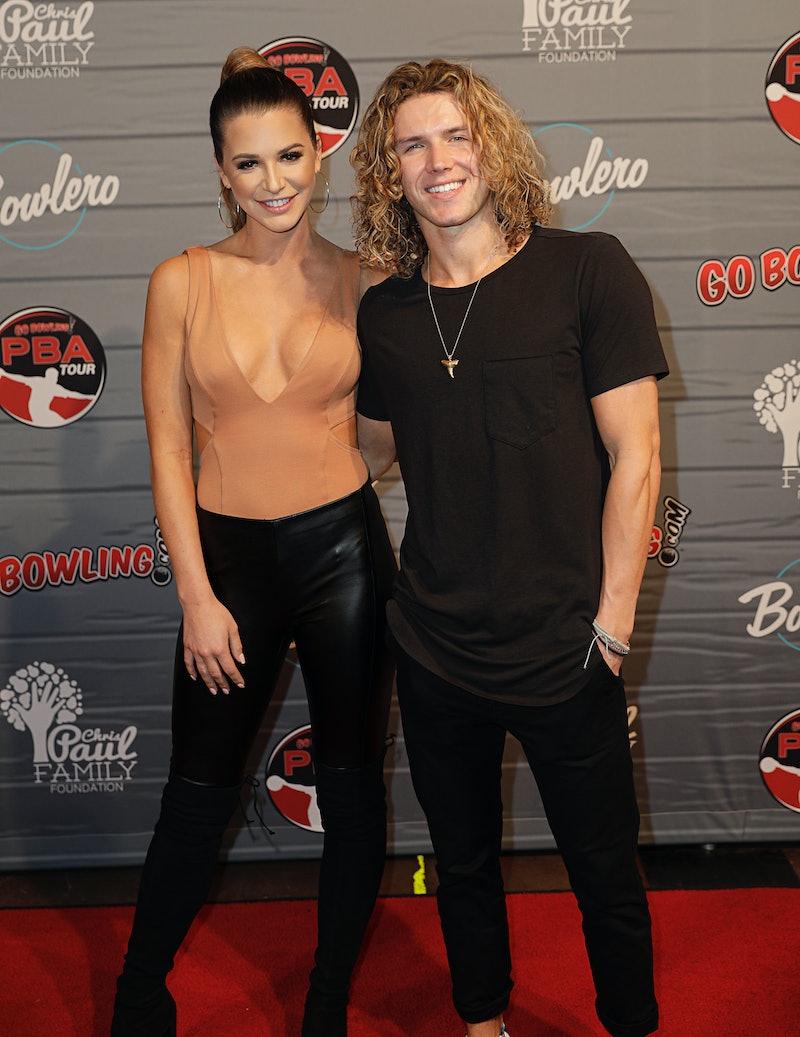 Not all showmances last outside of the Big Brother house, but former BB houseguests Tyler Crispen and Angela Rummans are one of the few couples who've made it work. As Tyler outwardly confirmed during the Season 22 premiere on Aug. 5, he and Angela are still very much together. In fact, as stated on his CBS bio, she's a big part of the reason why he's chosen to play Big Brother again: he wants to win the money so he can help her open a plant-based restaurant.

Unlike other relationships that burn fast and hot inside the Big Brother house, Tyler and Angela's romance evolved slowly throughout the course of Season 20. They initially bonded over both being from Hilton Head, South Carolina and continued to get closer after they joined the same "Level Six" alliance, eventually earning the couple name "Tangela." Now, over two years later, they're inseparable. Us Weekly reported in October 2018 that Tyler and Angela had moved in together in Los Angeles less than a week after their Big Brother finale.

“This whole experience has been a whirlwind, living with each other in the Big Brother house for three months without any contact to the outside world is unlike any other,” the couple said in a joint statement to the outlet. “You really get to know people to the depths of their core. We can’t imagine ourselves being apart and so it was a natural step for us to make things official in the real world and move in together.”

The two have since moved back to their native town of Hilton Head and created a jewelry company together called Naut & Chain that specializes in nautical-themed items. They've also launched a joint YouTube channel, Tangela Inc., allowing fans a closer look into their life together.

But as happy as Tyler and Angela seem to be, fans shouldn't expect to see wedding bells anytime soon. "These things happen naturally," Tyler told Entertainment Tonight in December 2018 when asked if he saw an engagement in their near future. Still, Tyler is committed to this relationship for the long haul. "This is the one, I already know that," he added.

Now, Tyler once again finds himself on the show that introduced him to his life partner. But without her there, he'll have to play much differently this time around.

More like this
Larsa Pippen Is Reportedly Dating The Son Of A Legendary NBA Player
By Jake Viswanath
Are Sparkle & Steven Together After 'Back In The Groove'?
By Grace Wehniainen
'Back In The Groove’s Steph & Leroy Might’ve Ended Up Together After All
By Brad Witter
Is Queen Elizabeth II Or The Royal Family In Netflix’s 'Harry & Meghan' Docuseries?
By Jake Viswanath
Get Even More From Bustle — Sign Up For The Newsletter