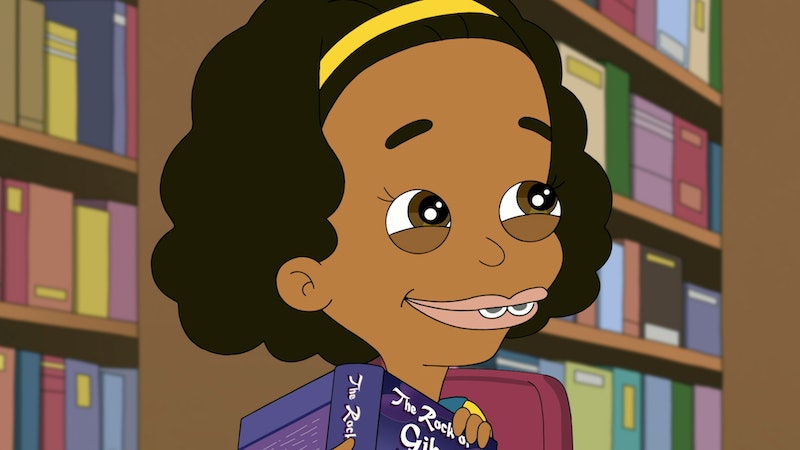 The Hormone Monstress has a new pupil (well, kind of, but not really): comedian and writer Ayo Edebiri will replace Jenny Slate in Big Mouth as the biracial Missy Foreman-Greenwald. Slate departed the Netflix animated series about middle school teens who find their lives upended by puberty back in June, citing the fact that her animated counterpart, who is half-Black, should be voiced by a Black actor. The decision came in the wake of the renewal of the Black Lives Matter movement sparked by police brutality. While Slate will continue to voice Missy in much of Season 4 (which doesn’t have a premiere date yet), Edebiri will take over in the penultimate episode.

Edebiri addressed her connection to the nerdy Missy in an interview with Variety on Aug. 28. “I was definitely a very uncomfortable child, so I think the show speaks to that and a lot of those feelings, which still resonate with me as an adult,” Edebiri said. “I’m back home in my childhood bedroom right now and on my bookshelf in between A Series of Unfortunate Events is Bill Clinton’s autobiography and Nelson Mandela’s autobiography and a translation of The Iliad in Latin.” In that sense, “I was a true dork," Edebiri said, "so I don’t think I have to go too far to connect with Missy."

Edebiri also celebrated the news on Twitter with a throwback photo of her younger self next to Missy, comparing her IRL form to her animated form.

Edebiri auditioned for the role after she had already joined Big Mouth’s writers room for Season 5. While she didn’t take the gig with the intention to audition, Edebiri maintained that her “comfort level” of “being in the room” and “knowing the story” had helped the process. “As a writer my goal is never to figure out, ‘Oh let’s get myself a part on this show,’” she said. “When I’m writing, I’m serving my boss’ vision and I want to be helpful in whatever ways I can be and lend my ideas and my jokes and whatever else they need to that.” She soon recorded various takes and received callbacks.

Co-creators Andrew Goldberg and Nick Kroll said Missy’s transition in the penultimate episode would come from a “really organic and cool place.” Kroll told Variety, “It’s about Missy’s continued evolution as a person — that she has all of these different parts of who she is: there’s the sidelines Missy and the more sexually adventurous Missy," Kroll said, "and then also this Missy that she’s been discovering [in Season 4] through hanging out with her cousins and really taking a look at her Black identity." The “change of actor is a heightened version of that,” as well as “a good example of how our characters are always evolving," he said.

Slate isn’t the only actor to step down from a voice role in light of the racial injustice protests. Kristen Bell, who voiced the biracial Molly in Apple TV+’s Central Park, announced her departure from the animated series shortly after Slate’s announcement.

More like this
If 'Entergalactic' Season 2 Happens, You Could Get A New Kid Cudi Album
By Kadin Burnett
Watch The Thrilling Teaser Trailer Of 'Shadow And Bone' Season 2
By Gretchen Smail and Jack Irvin
Here’s Where You Can Stream 'Schitt's Creek' After The Comedy Leaves Netflix
By Brad Witter
Jeffrey Dahmer’s Arresting Officer John Balcerzak Got His Job Back After Being Fired
By Grace Wehniainen
Get Even More From Bustle — Sign Up For The Newsletter