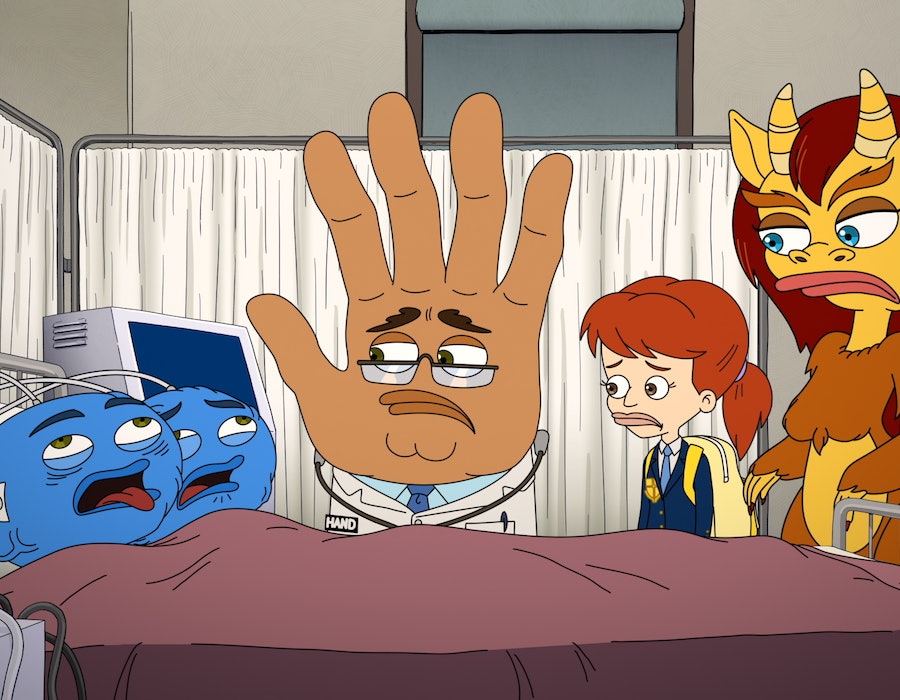 In the midst of a steamy makeout session, Jessi’s hot ninth grade boyfriend suddenly keels over in pain. The stomach cramps have become too much. There’s only one thing she can do to help his aching blue balls, he says: give him a hand job. Jessi (Jessi Klein), like many of her peers in Big Mouth’s sexually charged fourth season, must decide whether or not she is ready to embark down the treacherous new road of sexual intimacy.

Episode 7 of Big Mouth, titled “Four Stories About Hand Stuff,” brilliantly captures the highs and lows of middle school attempts at sex acts in a series of four vignettes written by Mitra Jouhari and Brandon Kyle Goodman. Each story takes on a different aspect of early sexual experimentation in the wake of Devin and DeVon’s divorce, which is rumored to be due to the glaring lack of hand jobs in their marriage. While the stories are united by “hand stuff,” the episode’s most affecting moments underscore how the social hierarchies of middle school — and the perceived sexual norms that come along with them — can affect decision making when it comes to hooking up.

“We wanted to capture that feeling of, ‘Am I behind? Or am I too far ahead? Or am I doing it wrong?’”Jouhari says. “In middle school, I thought I was sick for doing the things I was doing.” Watching your body change and coping with new and inexplicable desires as an adolescent often feels strange, disgusting, and embarrassing, while we imagine that our peers must all be having normal, non-awkward experiences. “Puberty is really memorable because you’re exploring your sexuality, you’re discovering your identity, but most of us go through this terrible time and then never unpack it,” Goodman adds.

"We wanted to capture that feeling of, 'Am I behind? Or am I too far ahead? Or am I doing it wrong?' In middle school, I thought I was sick for doing the things I was doing."

The most harrowing of the episode’s four plots takes on “blue balls,” a technically real but often weaponized affliction rooted in the notion that if a boy is turned on but not rubbed to completion, he will experience intense physical pain. Jessi first learns of this malady through her boyfriend Michael Angelo (Sterling K. Brown), an older and more experienced gauge-wearing hunk. When he insists that Jessi’s refusal to give him a hand job is causing him searing pain, a mortified Jessi is forced to consider committing this selfless act for her ailing lover — even though she and Michael Angelo both know that she doesn’t feel ready.

In contrast to the episode’s tender exchanges between Matthew and Aiden or Lola and Jay, "Jessi is with a partner who doesn't care to internalize her discomfort," Jouhari says. Jessi is wracked with anxiety while deciding whether or not to give him a hand job, but Michael Angelo tries to play the part of the nice guy while manipulating her into feeling bad for him. "He is a d*ck, but he is also a young person navigating sexuality who clearly has Jessi wrapped up in his spell,” Jouhari says. "Manipulation can [take] on many forms."

While the discourse around "peer pressure" often begins in middle school, it's most frequently employed to instruct young people not to corrode their brains with drugs and alcohol, while the complicated layers of sexual coercion are left out of the conversation. In Big Mouth, all the characters are stressed out by not knowing where they fall among their sexually active peers: Matthew feels like he hasn't gone far enough. Jay is sensitive when his fingering technique is corrected, and Jessi is trying to figure out why she has to be the one to pleasure her boyfriend if she's not ready when his hand is right there. In the end, Jessi gets broken up with for not giving Michael Angelo the hand job he's been pressuring her for.

While other characters’ first attempts at sex acts end in smiles or consensual orgasms, Jessi’s storyline feels equally grim and realistic. Her first foray into intimacy with another person ends up being more coercive than romantic, and those feelings of insufficiency are often difficult to shake. It’s a situation that resonates far beyond the world of middle school, which is in large part why Jouhari felt it was important to include. “I've had experiences like that before, a lot of women have had experiences like that,” she says. Perhaps women will feel less alone seeing it depicted, and equally importantly, perhaps the Michael Angelos of the world will see the episode as a cautionary tale.

More like this
Kevin Kreider Finally Asked Out Kim Lee On 'Bling Empire'
By Brad Witter
‘The Ultimatum: Queer Love’ Is Officially On The Way
By Radhika Menon and Kadin Burnett
Here’s When You Can Expect More ‘Indian Matchmaking’
By Brad Witter
'Firefly Lane' Season 2 Will Be The Show's Last — But There's A Twist
By K.W. Colyard and Grace Wehniainen
Get Even More From Bustle — Sign Up For The Newsletter