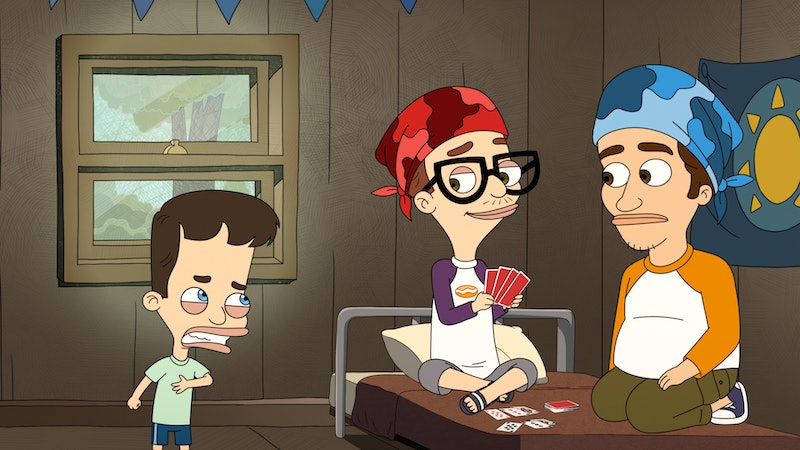 Heading into its fourth season, Big Mouth already had one of the most impressive casts of any current animated series with Nick Kroll, John Mulaney, Maya Rudolph, Jenny Slate, Jordan Peele, and Fred Armisen voicing the main characters. But the Netflix series upped the ante even more with the Big Mouth Season 4 celebrity guests. And given the show's regular cast makeup, it should be no surprise that the guest roles are packed with comedians and comedic actors, though there are a few surprises as well.

First up is comedian Maria Bamford, who appears to have the most significant new role as the Anxiety Mosquito, a monster who seems to plague all of the main characters by introducing them to feelings of anxiety. Zach Galifianakis shows up in Season 4 as something called the Gratitoad, who Deadline says is "there to help our crew cope with their anxiety and not let it completely own them." This means there will be some conflict between the two characters, and sure enough, the season's trailer does feature a shot of a supersized Anxiety Mosquito fighting a giant frog.

A decent chunk of Season 4 seems to take place at a summer camp, and a couple of big names make their appearances there. John Oliver plays a camp counselor named Harry who looks strikingly similar to the Last Week Tonight host. Seth Rogen also has a prominent role in the new season as Seth Goldberg (an apparent reference to Rogen's writing and producing partner/BFF Evan Goldberg). Seth is Nick's summer camp friend who is stolen away by Andrew when the latter unexpectedly shows up at the same camp. Saved By the Bell's Josie Totah plays a new character named Natalie, who may or may not be a summer camp kid.

Other guest stars include Pen15's Maya Erskine and Anna Konkle as "the Cafeteria Girls." The pair seem especially suited to the series, as their Hulu show covers a lot of the same ground as Big Mouth. (Here's hoping for a streaming service crossover.) A Black Lady Sketch Show's Quinta Brunson and Master of None's Lena Waithe will appear as Missy's cousins, and comedian Ayo Edebiri will make her debut as Missy in the season's penultimate episode. In June, Slate announced her departure from the role, stating "Black characters on an animated show should be played by Black people." The voice change seems like it will be worked into the story, and it's possible Missy's cousins play a role in the transformation. Finally, there are two wildcards in actors Sterling K. Brown and Paul Giamatti. Both actors, who are more associated with dramatic roles, will voice unknown characters in Season 4.

Big Mouth has never had a hard time finding funny guest stars to play with its comedian-heavy cast, but the Season 4 list might be the most impressive thus far.

More like this
If 'Entergalactic' Season 2 Happens, You Could Get A New Kid Cudi Album
By Kadin Burnett
Twitter Is Pouring Out Some Zhampagne As ‘Schitt’s Creek’ Leaves Netflix
By Brad Witter
Jeffrey Dahmer’s Arresting Officer John Balcerzak Got His Job Back After Being Fired
By Grace Wehniainen
Here’s Where You Can Stream 'Schitt's Creek' After The Comedy Leaves Netflix
By Brad Witter
Get Even More From Bustle — Sign Up For The Newsletter