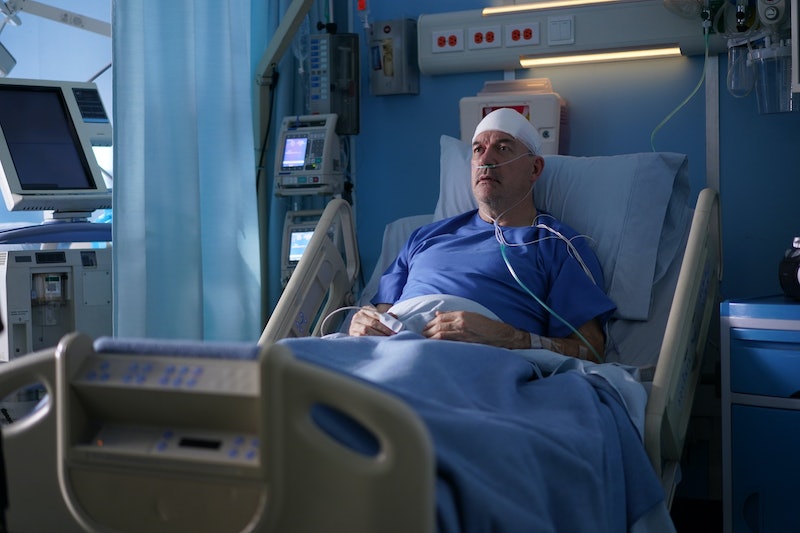 Spoilers ahead for Big Sky Season 1, Episode 8. Jenny thinks Legarski is faking his memory loss on Big Sky, and the evidence is piling up that she's right. At the end of the Feb. 9 episode, Legarski's wife Merrilee implored him to try to remember anything he could about Ronald now that he's getting closer to (and could potentially hurt) her. But Legarski insisted that he didn't remember anything... then tapped his fingers the way he always used to and looked at her menacingly.

The finger tapping is one of Legarski's most memorable character traits from before Cassie shot him. "There were certain things that had been really consistent," actor John Carroll Lynch told Entertainment Tonight of Legarski's tics. "The finger tapping has been in every episode. I had been intrigued by doing that because it really creates an instinctive character in a way that I really liked."

For the finger tapping to reappear certainly seems to suggest that the old Legarski is still in there — despite the innocent act he's been putting on. But that's not even the only clue that Legarski has been faking his memory loss. As Reddit user lightingal pointed out, Legarski didn't ask "What happened?" when he woke up; he asked "Who shot me?" That indicates that he remembers Cassie shooting him, even though he's been pretending to not know anything about what's happened in the last three years.

If Legarski stays in this "confused" state, the Sheriff said that he'll likely only be sent to a psychiatric facility and could later be released on good behavior. Legarski knows this, and he seems willing to keep up the charade as long as it keeps him out of jail — even if it means putting his wife is in harm's way.

More like this
All The Clues Zach & Christina Are Together After 'The Bachelor'
By Grace Wehniainen
Mack & Domynique Reportedly Had An "Epic" Breakup On 'Married At First Sight'
By Brad Witter
All The Clues Clint & Gina Aren’t Still Together After 'MAFS' Season 16
By Brad Witter
Netflix Shut Down 'Bridgerton' S3 Rumours About A “Very Dark” Storyline
By Bustle
Get Even More From Bustle — Sign Up For The Newsletter
From hair trends to relationship advice, our daily newsletter has everything you need to sound like a person who’s on TikTok, even if you aren’t.