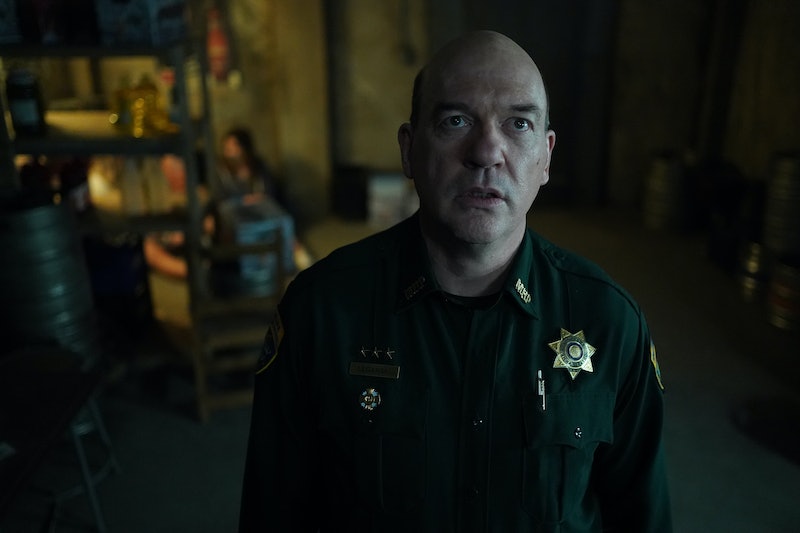 Spoilers ahead for Big Sky Season 1, Episode 6. If there's one thing we've learned from TV, it's to never assume a character is dead — apparently even when they've been shot in the head at relatively close range. Such is the case with Big Sky's Rick Legarski, who was revealed to still be alive in the winter premiere. At the end of the episode, his fingers twitched and one eye shot open, suggesting that he's woken up from his coma.

That could have a big impact on the show moving forward, depending on what state he's in. Legarski's wife previously worried that he wouldn't be himself when he woke up. If he has brain damage, it's possible he'll forget entirely that he's part of a sex trafficking ring. Or he might remember everything and turn on Ronald (the trucker) as part of some sort of plea deal to save himself. Ronald certainly seemed worried to hear that Legarski wasn't dead after being shot. If he learns that Legarski is recovering, he may take matters into his own hands to protect himself. Ronald was very obsessed with the police not getting a name that they could match to him, and the only one who knows Ronald's name is Legarski.

If Legarski retained his memory from the shooting, he could also cause problems for Cassie. She's claimed that she shot him in self-defense, but the sheriff is already confused about why she fired when Legarski's weapon wasn't even pointed at her. And as guilty as he looked being on-site with three people tied up who can all identify him as their captor, he also has a history of being in law enforcement that could work to his advantage. If Legarski can cast doubt on Cassie and make up some other story about why he was there and discredit the girls, he could potentially get away with everything and take Cassie down in the process.

Whatever happens, this may not be the first time Legarski faces death. After Legarski was shot in the fall finale, actor John Carroll Lynch told Entertainment Tonight that he couldn't see a scenario in which Legarski makes it out of the show alive. "I couldn't see a moral universe on the American Broadcasting Company where Rick Legarski would last too long," Lynch said. "I think there was a pine box in his future at some point ... I think he's somebody who signed up for it a long while ago, frankly."

In another interview with TV Line, Lynch added that he couldn't specify whether his character died after being shot by Cassie but said that "whatever happens is appropriate for this character." Lynch knows his character isn't a good guy, so what fate is appropriate for him? Time will tell, but just because Legarski can blink and move his fingers doesn't mean that his troubles are over. That pine box may still be waiting.

More like this
Everything You Need To Remember Before Westworld Season 4
By Brad Witter
6 Mind-Blowing Fan Theories About How Stranger Things Will End
By Kadin Burnett
Why Sadie Sink Is Hopeful Max Will Return In Stranger Things Season 5
By Brad Witter
What Working At Marvel Is Really Like, According To A 'Ms. Marvel' Co-Creator
By Gretchen Smail
Get Even More From Bustle — Sign Up For The Newsletter