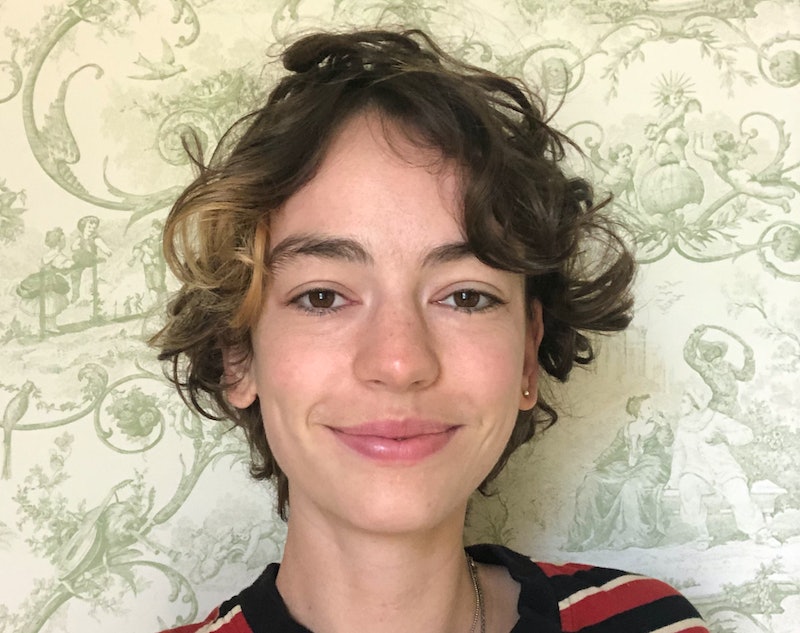 When celebrities (virtually) hang out with Bustle writers, we want to give them the chance to leave their mark. Literally. So we hand them a pen, a piece of paper, a few questions, and ask them to get creative. This time, Bill & Ted Face the Music star Brigette Lundy-Paine is leaving their mark in the Bustle Booth.

Brigette Lundy-Paine is over playing gendered roles. The actor known for starring on Netflix's Atypical as Casey, a teenage track star coming to terms with her queer identity after falling for her female best friend, came out as non-binary in 2019. Now, Lundy-Paine, who uses they/them pronouns, is waiting for the rest of Hollywood to catch up. “I think that if we can really tap into a humanity that isn’t obsessed with reinforcing gender norms then we can use the tool of storytelling to just write people as people,” the 26-year-old tells Bustle.

Which is exactly the way that Lundy-Paine approached their role in the 30 years-in-the-making latest installment of the Bill & Ted franchise. Lundy-Paine — who in real life is part of the improvisational band Subtle Pride — plays Billie, the daughter of Keanu Reeves’ Ted “Theodore” Logan. The music-obsessed Billie is nearly a carbon copy of her father, down to his frequent use of the word "excellent" and quirky mannerisms. ("For me it was [about how he carries] his arms in the original films. He holds his arms so far from his body, and that was fun to do," Lundy-Paine explains.)

While the film itself doesn’t explicitly delve into the character’s gender identity, Lundy-Paine plays the androgynous Ted 2.0 as non-binary — a decision they didn’t disclose to the filmmakers ahead of time. “It’s kind of a thing where if you say it to anyone, they get scared. So I play my characters that way naturally,” says Lundy-Paine. “Billie is a very non-binary character in that she doesn’t fit into a particular gendered performance, [and] the same thing goes for Casey in Atypical.”

Up next, Lundy-Paine will say goodbye to Casey in Atypical's fourth and final season. It's a bittersweet moment for the actor, as the role not only cemented Lundy-Paine's status as a rising star, but also helped them discover their non-binary identity. "I think that part of that lesson [of playing Casey is] that it’s OK to be your truth," Lundy-Paine says, praising the character for being a "fighter" and "not taking sh*t from anyone." "For me, that truth was that I’m a queer person who doesn’t align with gender."

More like this
'That '90s Show' Star Callie Haverda Got Advice From Mila Kunis & Ashton Kutcher
By Brad Witter
12 Years Ago, Austin Butler Manifested His Oscar Nom In This Disney Movie Scene
By Jake Viswanath
Here’s Everything Coming To & Leaving Netflix In February
By Jake Viswanath
North West Will Make Her Acting Debut Alongside Mom Kim Kardashian
By Radhika Menon
Get Even More From Bustle — Sign Up For The Newsletter