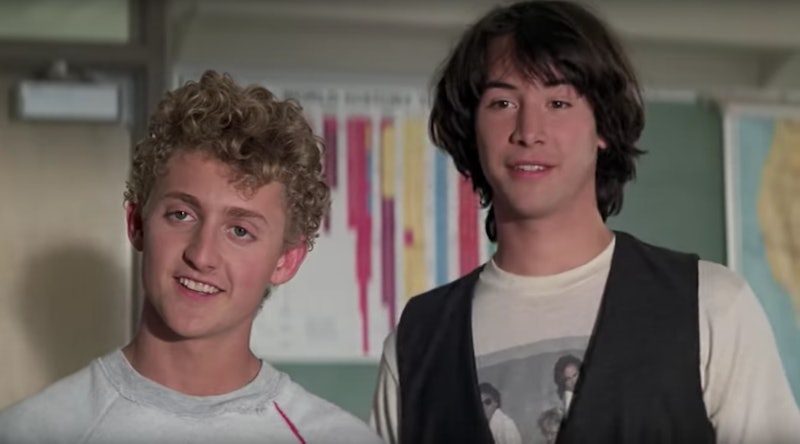 On Wednesday, March 20, actors Keanu Reeves and Alex Winter appeared in a short clip announcing that Bill & Ted 3: Face The Music is officially happening and its a moment that fans have certainly been waiting on for some time now. In the video, which was shared via Bill & Ted 3's official Twitter account, Reeves and Winter reveal that the third installment of the franchise will arrive in theaters on August 21, 2020. The news most certainly couldn't have come soon enough for fans who have been waiting nearly three decades to get Part 3 of the duo's story. With the sequel Bill & Ted's Bogus Adventure debuting in July 1991, Bill & Ted 3's 2020 release date places the second and third films roughly 29 years apart.

While sharing the exciting news on social media, Reeves and Winter took a moment to thanks fans for their unwavering support throughout the years. "It is all because of you guys, and so we owe you a huge debt of gratitude and we wanted to say thank you ... and be excellent," Winter said in the video.

CNN noted that production on the film will begin sometime this summer with Reeves and Winter reprising their roles of two slackers trying to pursue their rockstar dreams as the band Wyld Stallyns. The film's synopsis, which was shared by Buzzfeed, offers fans a glimpse into what they can expect. It reveals,

"Following 1989's Bill & Ted's Excellent Adventure and 1991's Bill & Ted's Bogus Journey, the stakes are higher than ever for William "Bill" S. Preston Esq. (Winter) and Theodore "Ted" Logan (Reeves). Yet to fulfill their rock and roll destiny, the now middle-aged best friends set out on a new adventure, when a visitor from the future warns them that only their song can save life as we know it and bring harmony to the universe. Along the way, they will be helped by their families, old friends and a few music legends."

As the news made the rounds, fans of the franchise had plenty of feelings with most finding the announcement to be nothing short of excellent, of course.

MTV News correspondent Josh Horowitz appears to be having an amazing day after hearing the news.

Another fan used a gif to express their excitement.

One commenter pointed out the overall greatness of movie news today.

This person is overjoyed to be getting not one, but two, Keanu Reeves announcements this week.

After expressing their love for the duo, this Twitter-user felt there was only "one way" to describe the exciting news.

The news has one person living the dream.

Actor James Buckley expressed his fandom for the franchise while referring to the announcement "incredible news."

Meanwhile, this fan appears to have strong emotions about Bill & Ted being back in business.

Although its been quite some time since fans have seen Bill & Ted on the big screen, their announcement clip makes it feel as if they haven't missed a beat. With that said, there's no telling what type of shenanigans will take place between the two characters when the film hits theaters next year.

Despite the time lapse between films, the details surrounding Bill & Ted 3 seem to have given fans a taste of late '80s and early '90s nostalgia that they never knew they needed. Party on, dudes!