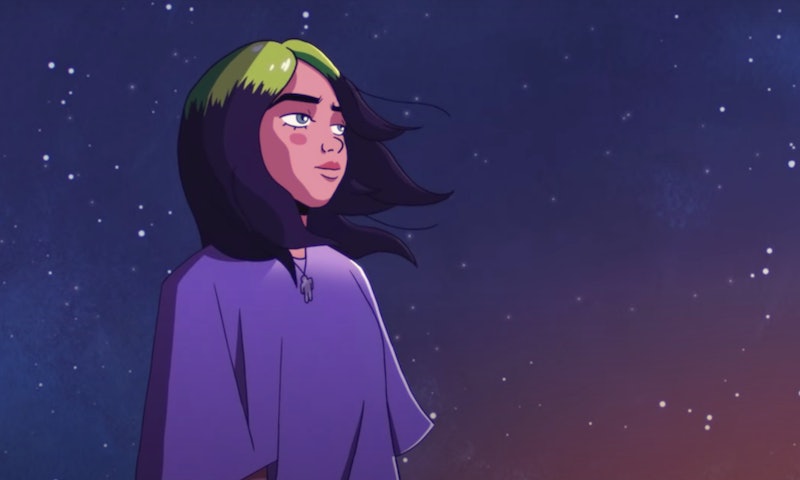 Has Billie Eilish been immersing herself in the works of Hayao Miyazaki in quarantine? Eilish released the music video for “My Future,” her newest single, on July 30 — and the animation gives off major Studio Ghibli film vibes. The song and video both tell the narrative of growth and self-discovery, as an animated Eilish walks through stormy, rainy terrain and then, ultimately, finds a field of nature and sunshine. And fans of animation will definitely be reminded of Miyazaki’s mesmerizing animated films, such as Spirited Away, My Neighbor Totoro, and Kiki's Delivery Service.

On the moody track, Eilish sings about being “in love with my future," adding, “Can’t wait to meet her, and I’m in love, but not with anybody else, just wanna get to know myself.” It's truly reflective of a quarantine state of mind, as everyone has forced to social distance and really be with themselves.

Eilish told Apple Music's Zane Lowe in a July 31 interview that she and her brother, Finneas, wrote and recorded “My Future” in the span of just two days. “This is the most we've ever worked in one period of time,” Eilish said. “We wrote it like, a month into quarantine probably, and it was pouring rain… Oh, it was such a perfect setting.” She added of the “crazy fast” process, “There was something about this one take that I did, and I was like, 'This is the only way that it can be.'”

The video, animated by Alex Dray, Annie Zhao, Cliona Noonan, Nancy Li, Sarah Schmidt, and more, seems to have references to a few Miyazaki movies. The rain falling, leaves swaying, and a frog leaping from a lily pad recall details seen in Spirited Away, a film that follows a young girl who stumbles upon an abandoned amusement park filled with supernatural spirits while en route to her new home with her parents. The colorful forest invokes imagery seen in My Neighbor Totoro, a film that follows two sisters who move to a country home and befriend playful spirits in the forest nearby.

The way Eilish herself is animated also resembles the female protagonists in each of these films — not to mention, Kiki’s Delivery Service, which follows a witch-in-training who moves to a seaside town for a year to learn the value of independence. In fact, like Eilish’s “My Future,” much of Miyazaki's films explore the coming-of-age of its teen girl protagonists. For the iconic Japanese filmmaker, growth and self-discovery in the aftermath of big life changes are recurrent themes in his work.

Eilish has spoken about how Miyazaki has influenced her work in the past. In a 2019 interview with Vice, the singer said that she creates a drawing for every song that she writes, a habit she has attributed to the famed animator. "I owe so much of it to Miyazaki and so weirdly unrealistic but realistic," she explained, specifically mentioning Spirited Away. "I watched it over and over and over. Oh my God, I thought it was so dope."

More like this
Twitter Is In Awe Of Taylor Swift’s “Lavender Haze” Music Video
By Jake Viswanath
8 Easter Eggs From Taylor Swift's “Lavender Haze” Music Video
By Shahed Ezaydi
Zach Gilford Admits He Forgot Taylor Swift's Name When He Starred In Her Music Video
By Jake Viswanath
You’ll Definitely Recognise Isadóra Bjarkardóttir Barney’s Mum
By Maxine Harrison
Get Even More From Bustle — Sign Up For The Newsletter
From hair trends to relationship advice, our daily newsletter has everything you need to sound like a person who’s on TikTok, even if you aren’t.