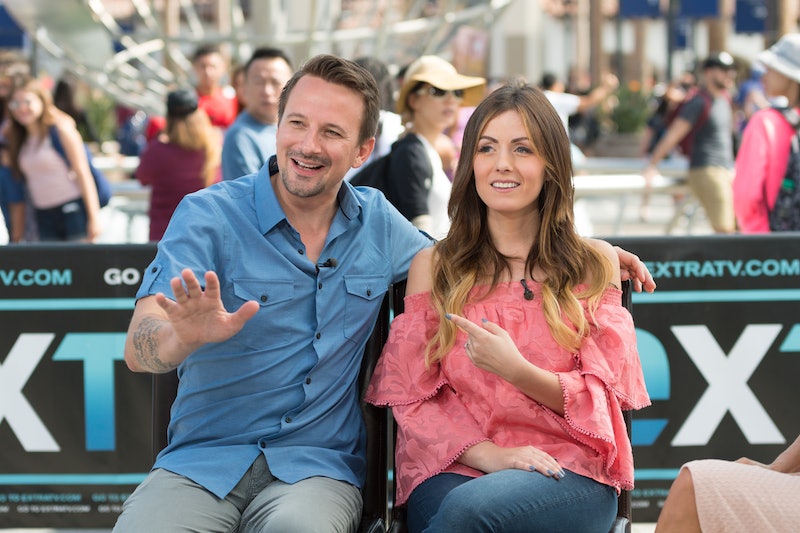 In an attempt to bring fresh energy into the new year, Carly Waddell opened up about her divorce from Evan Bass while burning sage in the room where they split. Broadcasting on YouTube from what she called "the divorce room," the Bachelor in Paradise alum clarified that Evan asked for a divorce the day after Thanksgiving. That timeline was particularly noteworthy considering the pair, who wed in 2017, purchased a new family home just months ago.

"We actually put three offers on houses in 2020 and every single offer fell through, which was really sad... The last one fell through [because] there was this horrible foundation problem in the basement... That was in, like, October," she recalled in the video. "And then I found this house and Evan told me to buy it, so I did. And then he told me he didn't want to live in it. So here we are. It's a new year."

Adding that they "tried for a really long time to make it work" and had "been going to therapy for years" before the separation, Carly explained their "biggest downfall" may have been too much focus on children Bella, 2, and 1-year-old Charlie, and not enough on their three-year marriage. "The kids came at the top of the pyramid and we never put ourselves at the top," she said.

In the end, following two "really hard" years, she said Evan decided to end the marriage: "I always told him that if he wanted out then it was his call because I'm just a person that would never be out. So, what are you gonna do? If somebody doesn't want to be with you, they don't want to be with you."

The pair, who met while filming Bachelor in Paradise Season 3 in 2016, officially announced their "difficult decision to separate" on Dec. 22. In a joint statement to People, Carly and Evan noted they "continue to have the utmost respect for one another" and would be shifting focus to what's best for their family's future. They also promised to always cherish their time together.

Carly ended her YouTube video, which also included a mini-tour of her new home, on a similarly positive note, insisting 2021 will be a great year. "I'm focusing on the future and this is the last time I really want to talk about any of this because I don’t want to be sad anymore," she concluded. "I want to be happy because I deserve it."

More like this
‘The Ultimatum: Queer Love’ Is Officially On The Way
By Radhika Menon and Kadin Burnett
Here’s When You Can Expect More ‘Indian Matchmaking’
By Brad Witter
How To Follow All the 'Married At First Sight UK' Contestants On Instagram
By Sophie McEvoy
There Will Be Several Love Triangles On 'Bachelor In Paradise' Season 8
By Kadin Burnett and Grace Wehniainen
Get Even More From Bustle — Sign Up For The Newsletter