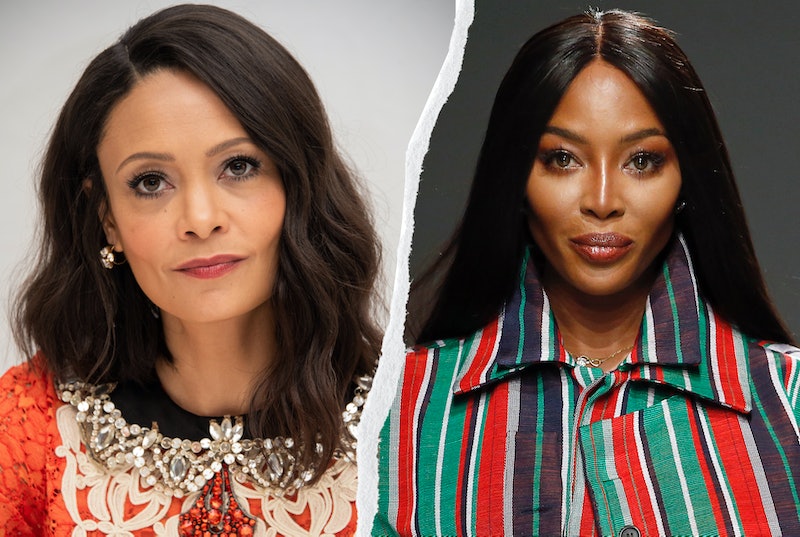 Naomi Campbell, Thandie Newton, and author Bernadine Evaristo are among the 80 Black British public figures urging airlines to not carry out a Home Office deportation flight next week. After it was reported that home secretary Priti Patel is planning to deport 50 people on a chartered flight to Kingston, Jamaica, on Dec. 2., a number of public figures have put their name to an open letter, ITV News reports.

The document, seen by the broadcaster, has been sent to six airlines known to have previously worked with the Home Office on deportation charter flights. Per The Guardian, it isn't currently public knowledge which airline is due to carry out the deportation.

Windrush campaigners, lawyers, broadcasters, and heads of NGOs have also added their name to the letter which is said to outline concerns raised by the Equality and Human Rights Commission that the Home Office's hostile environment policies are in breach of equalities laws and unfairly target Black people. It argues that the flights risk "unlawful and wrongful removal of people who have the right to remain in the UK."

Per ITV News, the letter reads:

"We have grounds to believe that one of your firms may be planning to operate the flight planned for 2nd December.

"We are writing to ask you to decline to operate the flight on the 2nd December and to pause the operation of deportation flights to Commonwealth countries for the foreseeable future," it goes on.

"There are a number of important reasons why such flights are wholly inappropriate at this time and risk the unlawful and wrongful removal of people who have the right to remain in the UK. These developments call into question the Home Office’s competency to deal with the continuing injustices it has created."

"Until justice has been delivered for all Commonwealth Windrush victims, any deportations to Commonwealth countries risk further unlawful removals of Windrush generation members or Windrush descendants who may have the right to remain in the UK but do not yet have the required paperwork."

The 2018 Windrush scandal revealed that deportations like this are commonplace in the UK. As Bustle reported earlier this week, during the height of the Windrush Scandal, they were taking place regularly, and back in February of this year, a flight deporting 17 people from the UK to Jamaica took off despite a legal challenge alleging that some detainees had not had adequate access to legal support.

Appealing to airlines to prevent deportation charter flights has proven to work in the past. Following the Windrush scandal, Virgin Atlantic stated it would "end all involuntary deportations" on its network. "We believe this decision is in the best interest of our customers and people,” stated a spokesperson in 2018.

Earlier this week, the Home Office stated that it makes "no apology" for its decision as the people detained on this flight include "murderers and rapists." In a statement to The Independent, they said: "Each week we remove foreign criminals from the UK to different countries who have no right to be here, this flight is no different."

More like this
What The UK Blocking Scotland’s Gender Recognition Bill Means
By Sam Ramsden
Gen Z Are Twice As Likely To Identify As Queer, According To New Data
By Sam Ramsden
Here’s Where The NHS Nurses’ Strike Currently Stands
By Sophie McEvoy
Rita Ora Finally Opened Up About Marrying Taika Waititi & Their "Perfect" Wedding
By Sophie McEvoy and Catharina Cheung
Get The Very Best Of Bustle/UK
Sign up for Bustle UK's twice-weekly newsletter, featuring the latest must-watch TV, moving personal stories, and expert advice on the hottest viral buys.