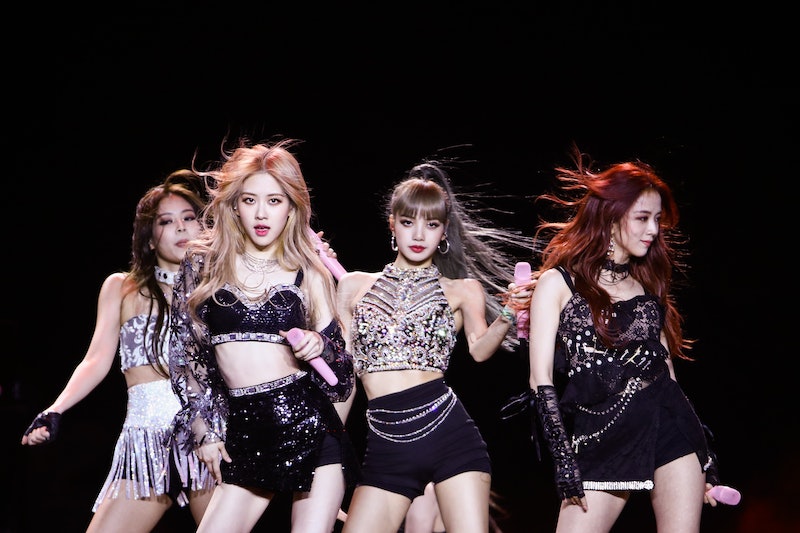 BLACKPINK's Lisa, Rosé, Jennie, and Jisoo are spilling it all after the debut of their Netflix documentary, BLACKPINK: Light Up the Sky. The South Korean girl group appeared virtually on Jimmy Kimmel Live! on Tuesday, Oct. 20 to discuss everything they have going on at the moment, from the doc to their debut album — and they even revealed the origin of the name BLACKPINK.

"We kind of felt like there's two colors that represented us the most [because] we're very girly, but at the same time, we're very savage too," Rosé explained. "We have a song called 'Pretty Savage' and it kind of goes with 'black pink,' and so we thought it described us the best." As for the straightforward title of their album, called THE ALBUM, there is no hidden meaning — just a desire to satisfy fans who have been waiting for new music.

“We had a bunch of ideas, but at the end of the day we knew our faves were waiting so much for our album that we just decided to go with something that described it the most," Rosé added. And with collaborations from superstars like Selena Gomez and Cardi B, THE ALBUM doesn't need a more complicated title. It speaks for itself.

The members also touched on their new Netflix documentary, which offers an intimate exploration of the band's background, as well as the special training program for prospective K-pop stars. When Kimmel compared the program to that of Hogwarts or an "X-Men type of situation," Rosé offered insights on the curriculum; and no, math and science aren't on the syllabus. "I think I was personally really excited that we got to get rid of all those, in my opinion, annoying subjects," Rosé said. "Mainly it's all about performance and language."

K-pop idol training programs have been a source of controversy, too, with many accusations having been made about strict regimens, weight control, and exploitative contracts. In a recent interview with Bustle, BLACKPINK: Light Up the Sky director Caroline Suh said she was surprised by the band’s transparency about their time in training. "We didn't know how they would feel about talking about it, but they were really candid about it," Suh said. "It's by their own volition, so they want[ed] to be [in the program]. They want to be doing this. Like anything else I think to become excellent, you'd have to really just invest a lot of work and time."

Suh also reflected on K-pop's global domination, citing BLACKPINK's historical stint as the first female K-pop group to perform at Coachella. "As someone Korean, I think it's just crazy that people are singing in Korean at Coachella," she said. "It's something that I never could have imagined when I was growing up."