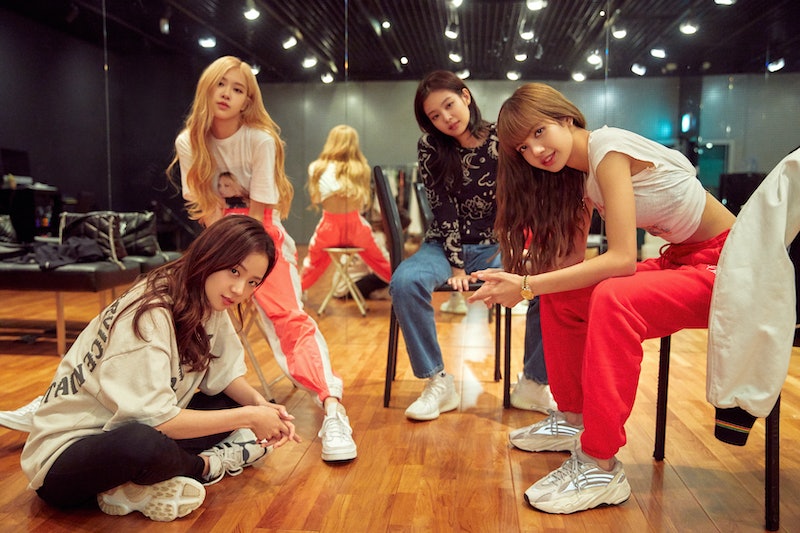 If you've been paying any attention at all to pop culture in the last few years, you know that K-pop has become a worldwide phenomenon over the past decade. But you'd be forgiven if you don't exactly know what K-pop is, or who the big names are in the K-pop music industry. Thankfully, there's a new documentary on Netflix that is a great gateway into the K-pop world. Blackpink: Light Up the Sky, directed by Caroline Suh, is a strikingly intimate exploration of a highly-stylized industry and an easily accessible ticket into this musical world.

Suh is known as the director of the docuseries Salt, Fat, Acid, Heat for Netflix, so when she got the assignment from the streaming site to document the girl group Blackpink on a world tour, she didn't know too much about K-pop. (Despite being Korean herself.) "I had to reach out to my nephew, who's in high school," she tells Bustle. "He definitely gave me a tutorial, but I didn't know very much at all." But her nephew's education was just the beginning. Suh quickly became enamored by Blackpink's thumping, bubbly, colorful videos — and before she knew it, she was a Blink (the name fans of Blackpink call themselves).

So if you're new to K-pop, or just want to brush up on the industry before watching Blackpink: Light Up the Sky, here are some things you need to know, courtesy of Suh.

What's The Doc About?

Suh's film is a behind-the-scenes look at the working process and background of Blackpink's four members: Lisa, Jisoo, Rosé, and Jennie. From their time in the studio recording songs, to their extravagant world tour, to the intense fandom that follows wherever they go, the film chronicles a rarely seen side of one of the world's biggest K-pop groups. The doc also dives deep into their backgrounds, childhoods, and features intimate one-on-one interviews with each member. And it's been a massive hit with critics, sitting fresh at a 100% score on Rotten Tomatoes.

K-pop isn't a specific style of music, rather the genre encompasses elements of R&B, rap, hip hop, soul, traditional pop, among many others. It's also more of a pop culture system than just a music one. As Vox explains in its extensive history of K-pop, its lure comes from its "distinctive blend of addictive melodies, slick choreography and production values, and an endless parade of attractive South Korean performers who spend years in grueling studio systems learning to sing and dance in synchronized perfection."

The studio system, rung by mega-corporations SM Entertainment, YG Entertainment, and JYP Entertainment is, "An 'idol system' for auditioning and creating pop talent, not unlike the mechanization of Berry Gordy's Motown in the 1960s and '70s, and financial support for the arts by the South Korean government," according to NPR.

Blackpink is a girl group that debuted in 2016. The group members are Jenny, 24, the main rapper, Jisoo, 25, the oldest member of the group and the "visual mood-maker," Rosé, 23, the main singer, and Lisa, 23, the youngest member, also called the "maknae." Here's Suh's take on each of band member:

"Jenny is shy, but she's so straight forward," Suh says. "She's very direct. So she kind of spoke about things very easily," she says of their intimate interviews featured in the film.

Rosé "is pushing herself musically," Suh says of the group's singer-songwriter type. "She has a true love and respect for music and is really trying to become a songwriter, but she's really shy about it."

Jisoo, Suh says, "holds back. I think it's out of maturity and the fact that she's the oldest. She's really caring and she sees herself as the one who should be supportive of the other girls. She really does have a quiet, very strong personality."

And Lisa, who is actually from Thailand, is just a bubbly, burst of energy. "She did an audition [in Thailand] with like thousands of people and was the only one who made it through," says Suh.

What Makes Blackpink So Special?

Blackpink scored the highest-charting U.S. single debut for a Korean girl group and became the first K-pop female group to perform at Coachella. But K-pop fans, Suh says, really gravitate towards the individual members. "That's part of what makes K-pop, K-pop is that there's an appeal to the different members and they have different personalities."

Part of the film's goal, Suh says, was to highlight their backgrounds and tell their individual stories. "Lisa and Rosé relate to each other because they're both kind of foreigners, even though Rosé is Korean, she grew up in Australia. They had very different lives before they started training and they're also the youngest. Jisoo and Jenny are the elders, which is a big deal in Korea to be even like a year older. You're given respect by the younger people.

All four of them together, Suh says, "Are very sweet, laugh easily, and are very peppy. But you realize that behind that there's this kind of perseverance and determination and incredible will that got them to where they are."

What's With The Controversy?

The South Korean idol training programs have garnered some controversial accusations, from abusive situations, to strict regimens, to weight control, and exploitative contracts. "Going through training school, you have to really have some inner toughness," says Suh. "And I think that's one thing that they all have in common."

While Suh was initially nervous to broach the subject of the training programs with the band members, she was surprised by their honesty. "We didn't know how they would feel about talking about it, but they were really candid about it," Suh says. "It's by their own volition, so they want[ed] to be [in the program]. They want to be doing this. Like anything else I think to become excellent, you'd have to really just invest a lot of work and time."

What Makes K-Pop Resonate Around the World?

Suh finds K-pop's global domination to be "one of the most fascinating things about it yet I don't really know [why it resonates] to be honest. As someone Korean, I think it's just crazy that people are singing in Korean at Coachella. It's something that I never could have imagined when I was growing up."

K-pop's amalgamation of pop music, R&B, soul, Bollywood, rap, and hip hop, plus the eye-popping videos are all a part of what made the genre such a global phenomenon. Given that the sound and style embodies so many cultures it's easy to dip your toes into — especially with this new doc as a primer. "You really don't have to know anything about K-pop," Suh says of her film. But she hopes that it will make people want to learn more about the industry. "[I hope] people will find some inspiration in [Blackpink's] classic, simple story. [The doc] is meant for people who know nothing about K-pop to just watch and get this kind of escapist trip."