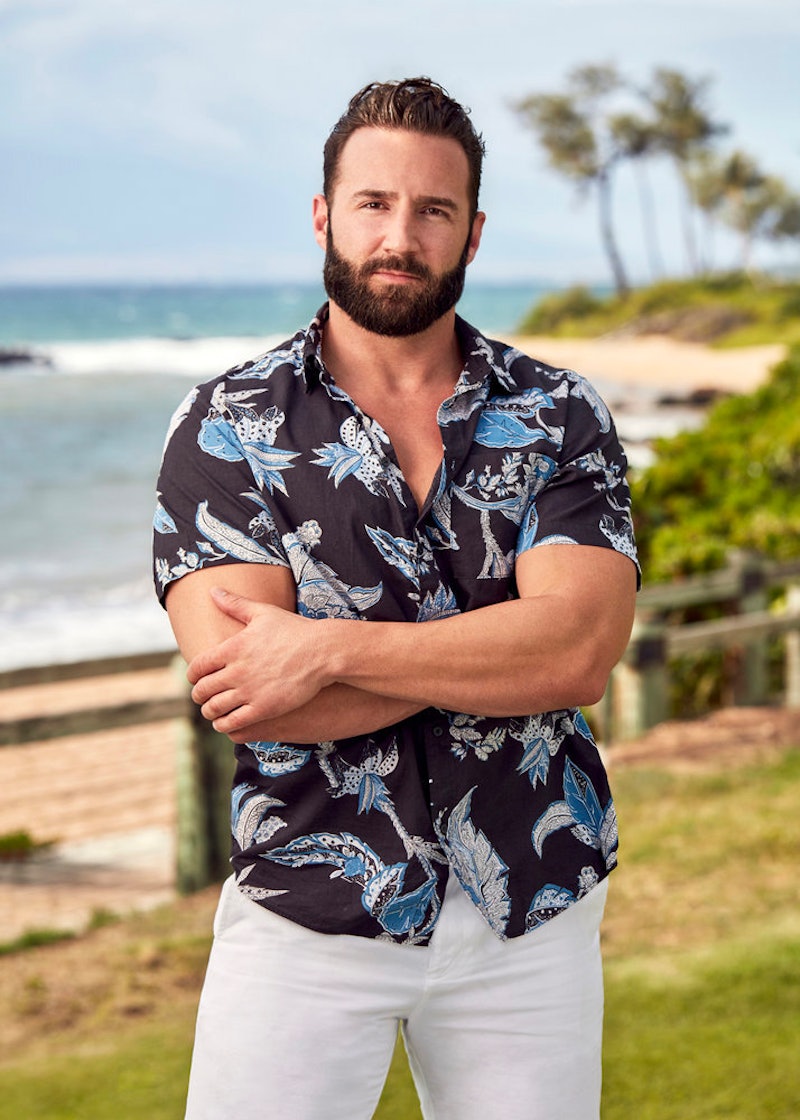 Based on the sneak peek for Temptation Island Season 3, Blake Eyres will be one of the singles to pay attention to as four new couples put their relationship to the test. He seems to get pretty close to Chelsea, who arrives on the island with her boyfriend Thomas. Will he succeed in luring her away from her relationship? Here's everything to know about the 34-year-old as we watch it all play out.

Blake's job has landed him a few celebrity clients

Blake jokingly describes himself as a "mouth mechanic" on Instagram, but he's actually a dentist in St. Louis, Missouri. According to Missouri's Fox 2 Now, he grew up in Creve Coeur and attended Parkway North High School before receiving a football scholarship to Truman State University. He graduated with a Bachelor's in biology and went on to attend the UMKC School of Dentistry.

Now, Blake seems to be a popular dentist among reality TV show stars. In 2016, he posted a photo with Vanderpump Rules stars Tom Sandoval and Ariana Madix with the caption that it's "always great when my two couple pop in the office to get their dental work and teeth whitening done."

Blake has been single for a while

According to Us Weekly’s sneak peek of Season 3, it's been a while since Black has been in a relationship. "The last relationship I was in was almost five years ago," he admits in the clip. "Didn't go so hot." He adds that he's open to love again, though. "I plan on winning the women on this island I'm most interested in by just being a great listener, a good communicator, and by just being myself."

According to his official Temptation Island bio, Blake isn't your "typical dentist" and loves being outdoors. His Instagram features plenty of hiking trips, from the Grand Canyon to Telluride in Colorado (which he tagged as #myhappyplace in an August 2019 post). He's also an avid snowboarder, and has hit the slopes from Tahoe all the way to the Obertauern resort in Austria.

Blake seems to be pretty big on dressing up for festivals like Coachella, Burning Man, and Shaky Beats Fest, as well as showing off his quirky fan collection.

Blake is a philanthropist

Though he appears to be a pretty big partier based on his Instagram, Blake is also dedicated to his family and philanthropy. He frequently raises money for the Leukemia & Lymphoma Society, and even teamed up with Bachelor contestant Amber James in 2016 to fundraise for the organization.

The reason he's so passionate about the cause is a personal one: his youngest sister was diagnosed with leukemia when she was born and almost didn't make it. "My precious lil sis is now 25 years old, and works a full-time job with other amazing persons with special needs," he wrote in a May 2019 Instagram post. "She is the poster-child of a SURVIVOR and a FIGHTER and she inspires me everyday [sic]."

More like this
'Love Island’s Kai Fagan Is Very Clear About What He Doesn’t Like
By Sam Ramsden and Darshita Goyal
Twitter Is Saying The Same Thing About 'Love Island'
By Sophie McEvoy
Twitter Is Saying The Same Thing About Ekin-Su’s 'Dancing On Ice' Debut
By Sophie McEvoy
This Pre-'Love Island' Video Of Olivia & Zara Together Changes Everything
By Bustle UK
Get Even More From Bustle — Sign Up For The Newsletter
From hair trends to relationship advice, our daily newsletter has everything you need to sound like a person who’s on TikTok, even if you aren’t.