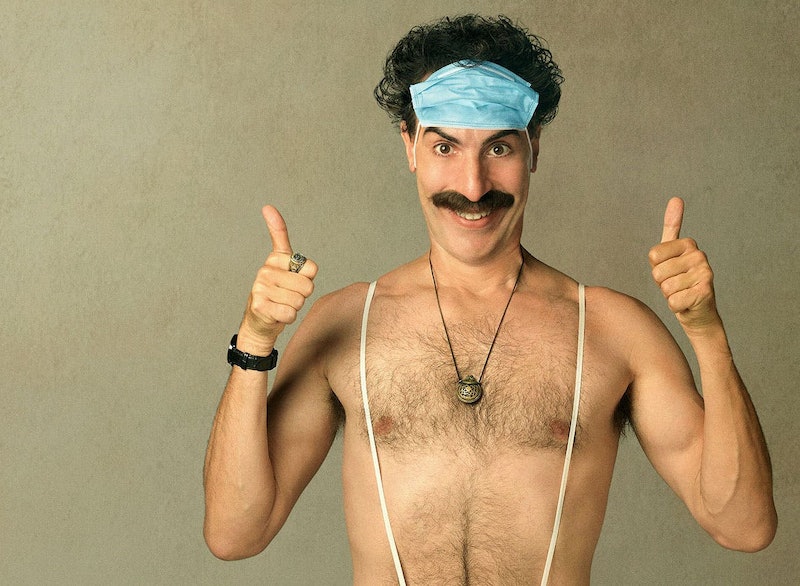 If you thought 2020 couldn't get any wilder, Borat is here to prove just how wrong you are. Sacha Baron Cohen has brought back his beloved Kazakh journalist character for a brand new film that takes on the coronavirus pandemic, Donald Trump, antisemitism, sexism, and just about every other issue plaguing American society. And since no one even knew this movie existed a couple of months ago, you'd be forgiven if you didn't know everything about Borat 2. But don't worry, this article is here to answer all your questions about the film.

First off, the movie's title is not Borat 2. Though it is a direct sequel to the 2006 film, Borat: Cultural Learnings of America for Make Benefit Glorious Nation of Kazakhstan, the new film's actual title is Borat Subsequent Moviefilm: Delivery of Prodigious Bribe to American Regime for Make Benefit Once Glorious Nation of Kazakhstan. The movie features Baron Cohen reprising his role as the titular journalist, but he's the only returning character from the original. Joining him are Maria Bakalova as Borat's 15-year-old daughter Tutar, and Dani Popescu as the leader of Kazakhstan. The rest of the film is populated with mostly unsuspecting victims of Baron Cohen's style of gonzo comedy.

Read on for everything else you need to know about Borat 2.

The Plot Of Borat 2

Like the first film, the plot of Borat 2 is really a loose connection of threads tying together Borat's pranks on unsuspecting American citizens, showing the ugliest corners of our society. Borat has spent the past 14 years in a Kazakh prison camp after embarrassing the nation with his first film. But at the beginning of the film he's recruited by the nation's leader to earn redemption by returning to America and presenting a bribe to Mike Pence in order to restore Kazakhstan's position in the world. The bribe is meant to be Johnny the Monkey, a simian porn star, but after arriving in the U.S., Borat discovers that his daughter Tutar has stowed away in the monkey's crate and eaten him. It's then decided that Tutar will be presented to Mike Pence instead. That's the rough plot, but it's really the story of Borat growing closer to his daughter as he comes to accept some different ways of thinking. The plot is driven mainly by sketches that ensnare Trump supporters, COVID skeptics, debutante ball attendees, various shop owners, doctors, politicians, and everyone else unfortunate enough to cross paths with Borat and Tutar.

Borat 2 has received strong reviews. On review aggregate site Rotten Tomatoes, the movie boasts a Certified Fresh rating of 82% after 135 reviews. In general, the consensus seems to be that Borat 2 has some funny moments but can't touch the original in terms of comedy or originality. Most critics also seem to appreciate how well the character is able to show Americans' warts even after his 14-year hiatus. In a positive review for the San Francisco Chronicle, Mick LaSalle wrote, "Not everyone will like this movie. But a case could be made for its coarseness and excess as a reflection of our current moment."

It wouldn't be a Borat movie without controversies. The first movie dealt with a barrage of (unsuccessful) lawsuits from people who were unhappy about their appearances in the film, and the sequel has already received at least one. According to Deadline, the estate of the late Holocaust survivor Judith Dim Evans has sued Baron Cohen, accusing him of duping Dim Evans into appearing in the film. The actor has countered that Dim Evans knew both the context of her appearance and agreed to participate, the outlet also reports. The film is dedicated to her memory.

The more buzzed-about controversy involves Rudy Giuliani. President Donald Trump's personal lawyer appears toward the end of the film, where he participates in an interview with Borat's daughter under the belief that she is a reporter for a right-wing news outlet. Following their interview, which takes place alone in a hotel room, the pair migrate to a bedroom, where Giuliani reclines on the bed and reaches down the front of his pants. Borat bursts into the room and breaks up the proceedings, leaving the former New York City mayor startled and confused.

Giuliani has since spoken out about his appearance in the film on Twitter: "The Borat video is a complete fabrication. I was tucking in my shirt after taking off the recording equipment. At no time before, during, or after the interview was I ever inappropriate. If Sacha Baron Cohen implies otherwise he is a stone-cold liar. In fact, the NY Post today reports 'it looks to me like an exaggeration through editing.' As soon as I realized it was a set up I called the police, which has been noted in THR article on July 8th. This is an effort to blunt my relentless exposure of the criminality and depravity of Joe Biden and his entire family. Deadline Hollywood reports CAA had a distribution screening in September where there was no mention of the scene holding any importance. We are preparing much bigger dumps off of the hard drive from hell, of which Joe Biden will be unable to defend or hide from. I have the receipts."