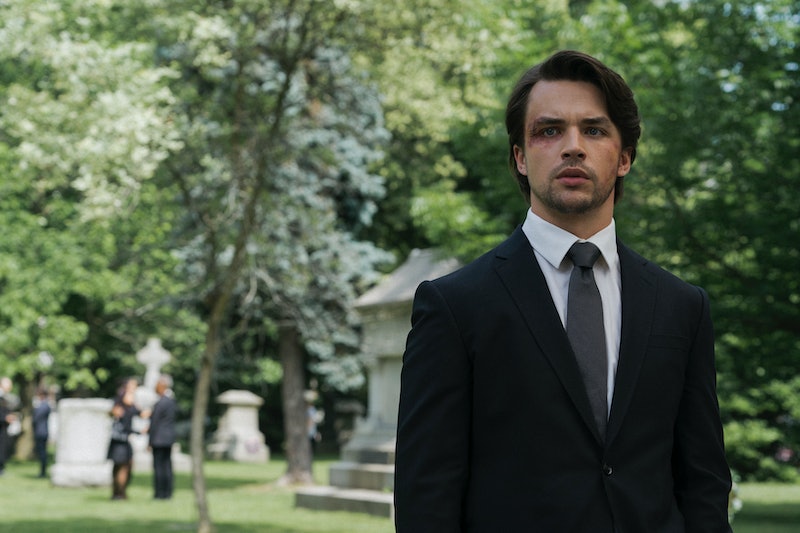 Based on a short comic series by Mark Millar, Netflix’s Jupiter’s Legacy tells the story of a group of second generation superheroes who are struggling to live up to the legacies and ideals of their superpowered parents. One such character is Brandon Sampson (Andrew Horton), the son of the much-loved and altruistic superhero duo The Utopian (Josh Duhamel) and Lady Liberty (Leslie Bibb).

Gifted with superhuman strength and nigh invulnerability, Brandon tries hard to be the perfect son and superhero — saying grace at family dinners and always showing up when there’s an emergency — but his willingness to kill to protect his loved ones puts him at odds with the old-fashioned Utopian. “He aspires to be his father,” Horton told Fangirlish. “But the younger generation are finding that the [Superhero] Code [of no killing] feels outdated and maybe some of the ideals that have been upheld for so long ... aren’t necessary.”

If you’re at all familiar with the brutal and egotistical Brandon in the Jupiter’s Legacy comics, the idea that the show’s version of Brandon wants to be like Utopian may surprise you. But showrunner Sang Kyu Kim told Syfy that the show is ultimately a new take on the comics. “Obviously, we have the comic books there, but this is really our adaptation of that foundation,” Kim said.

It’s unclear how much the TV show will diverge from the comic book, but at the outset of the show, Brandon appears to be set up in a way that could make him potentially very different compared to his comic book counterpart.

In the comics, Brandon is a whiny celebrity who refuses to actually use his powers to save anyone because, as he says, there’s “nobody cool to fight anymore.” When there’s a fight against the villain Blackstar — a key scene in the show where Brandon saves his father — comics Brandon can’t even be bothered to show up to help. He later tries to impress his dad by drunkenly carrying a full cargo ship through the air, but ends up dropping several containers and crew before Utopian saves the day. “I wanted a successor and I ended up with a disgrace,” Utopian says. He’s ashamed of how shallow and drunk Brandon is, and how easily he’s willing to risk lives for clout.

Because Brandon hates being disciplined, he complains to his uncle Walter (Ben Daniels in the show), aka Brainwave, that he sometimes he wants to “strangle” his dad. Walter, who’s similarly upset Utopian won’t let him use his telekinesis to intervene in America’s political affairs, tells Brandon to just do it. “You’re not the only one he’s alienated with that high-handed attitude,” Walter says. “Ask your friends. You’d be surprised how many people want to see him take a tumble.”

Walter very easily convinces Brandon that if they kill Utopia, Lady Liberty, and Brandon’s sister Chloe (Elena Kampouris on the show), together they can overhaul America and end poverty and suffering. Literally all of the planet’s superheroes get in on the plan — yes, this is a very sad and cynical take on superheroes — and they all take turns beating Lady Liberty and Utopia to death. Brandon himself delivers the final blow to Utopia by blasting his laser eyes through his dad’s skull. The only one who manages to escape is the pregnant Chloe, who is zapped away to safety by her boyfriend Hutch (Ian Quinlan).

Brandon feels triumphant about finally besting his overbearing parents, but in the nine years that follow, his plans to fix America predictably fail. The country becomes a militarized state full of poverty and violence, with Brandon attacking protesters and other countries on a whim. It’s Chloe, Hutch, and their superhero son Jason who ultimately bring a team of supervillains together to defeat Brandon and Walter and re-establish order.

It’s a shocking and grim story, and it’s unclear if (and how much) the show intends to follow or subvert that storyline. In fact, at the start of the show, it appears that it’s actually Chloe who is harboring much more volatile emotions towards Utopian than Brandon is. “[Chloe is] unfiltered, quite brash, and her powers are tethered to her emotions, which makes her quite unpredictable,” Kampouris told Den of Geek. “She’s in a major place of pain and navigating all of these feelings of guilt and dysfunction.”

Fans will just have to wait and see if Brandon eventually becomes his much darker comic book counterpart, or if someone else takes up that mantle on the show.