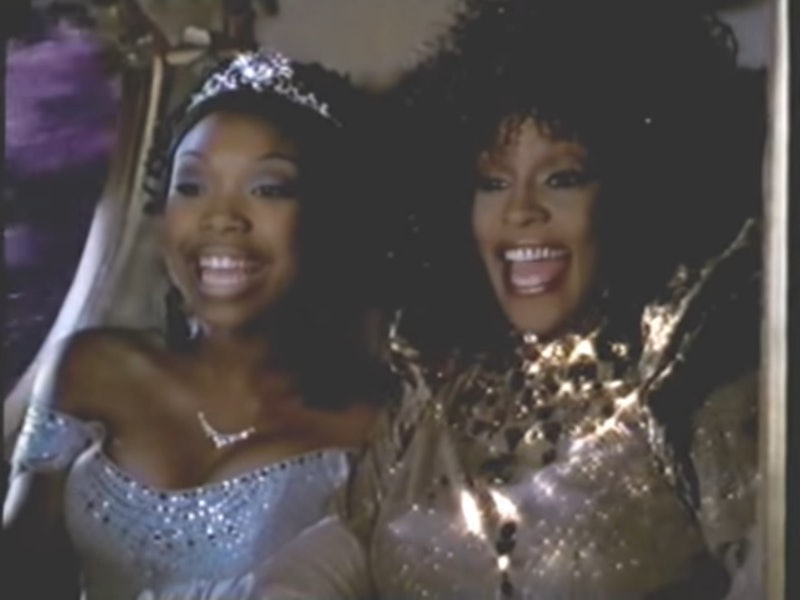 Following widespread calls from fans online to get the '90s classic on a streaming service, Brandy said she wants her Cinderella movie on Disney+, too. Brandy, who starred in the 1997 live-action adaptation of Rodger and Hammerstein's Cinderella, said she would love for the streaming platform to offer the film, but has, "no idea" why it hasn't been picked up. The film, which was produced by Whitney Houston, featured an all-star cast that included Bernadette Peters, Jason Alexander, Whoopi Goldberg, and Paolo Montalban, and is widely regarded to be one of the best adaptations of the fairy tale.

Disney+ is currently streaming several other versions of Cinderella, including the 1950s animated film, the 2002 sequel titled Dreams Come True, and a third animated film titled A Twist in Time. The 2015 live-action remake, which starred Lily James and Richard Madden, is expected to begin streaming on Sept. 1, per Disney+. In July, Brandy discussed her classic Cinderella adaptation in an interview with Rolling Stone, but when asked why the film had yet to be made available, she said: "I absolutely don’t have any insight into that!"

The B7 singer might not have any details on if or when the film will be added to the platform, but she agreed the film should be picked up, especially so fans can see musical legend Houston play her Fairy Godmother. "It should on there because it’s Whitney Houston alone. You know what I mean?" she said. "You know what I mean? All by itself, just because it’s Whitney Houston." However, as a consolation, Brandy did note that one of her other notable films, Double Platinum, in which she stars alongside Diana Ross, was recently added to Netflix.

Brandy, whose seventh studio album dropped on July 31, noted that Double Platinum's streaming debut might hint that there's hope, "Disney can come on up and scoop up Cinderella." She added: "That would be awesome, I would love that."

Cinderella represented a turning point in Brandy's career, as the singer, who'd been starring in the sitcom Moesha, had never been in a film. She credits Houston for making her star turn happen. In 2017, Brandy told the story of being cast in Cinderella to Shondaland, saying, "I'd heard through the grapevine that Whitney was going to be Cinderella, and I thought that was great casting. But she said, 'No, I’m gonna be your Fairy Godmother.' I screamed at the top of my lungs and ran all around my house." The film went on to garner critical acclaim, earning seven Primetime Emmy Nominations in 1998, and won one for, Outstanding Art Direction for a Variety or Music Program.

Fans continue to watch and love the adaptation of the fairy tale over a decade later, and in recent weeks, there have been plenty of calls for Disney+ to stream Cinderella on Twitter and Instagram. Brandy is on board for the streaming platform to add the Wonderful World of Disney film to Disney+'s ever-growing roster of classics. And if her fairy godmother were here, she'd certainly tell Disney+ to make it happen.

More like this
The 'Scream 6' Trailer Shows Off Hayden Panettiere's Return & Ghostface In NYC
By Jack Irvin and Jake Viswanath
12 Years Ago, Austin Butler Manifested His Oscar Nom In This Disney Movie Scene
By Jake Viswanath
'That '90s Show' Star Callie Haverda Got Advice From Mila Kunis & Ashton Kutcher
By Brad Witter
Mel B Thinks These Celebs Should Play Them In A Spice Girls Movie
By Alyssa Lapid
Get Even More From Bustle — Sign Up For The Newsletter
From hair trends to relationship advice, our daily newsletter has everything you need to sound like a person who’s on TikTok, even if you aren’t.