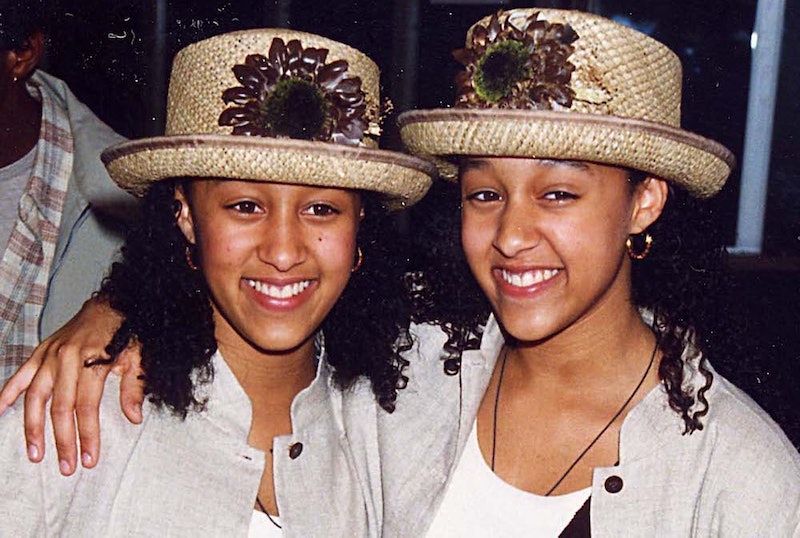 Roger is going home — well, to your home, soon. Sister, Sister is officially headed to Netflix in September, along with a roster of other iconic Black sitcoms from the ‘90s and the early aughts. Netflix’s Strong Black Lead announced the news on July 29, tweeting that Sister, Sister — along with Moesha, The Game, Girlfriends, The Parkers, Half & Half, and One on One — will soon be available to stream in the U.S. Sister Sister stars Tia Mowry-Hardrict (Tia Landry), Tamera Mowry-Housley (Tamera Campbell), Jackée Harry (Lisa Landry), and Tim Reid (Ray Campbell) celebrated the news in Netflix's video announcement, confirming the show will hit the streaming service on Sept. 1.

Mowry-Hardrict, who starred in both Sister, Sister and The Game (which is coming Aug. 15), mused that the shows have “made a huge impact on the culture” in the video. Reid echoed these sentiments, adding that the sitcoms have provided the actors the ability to “be in the homes of people worldwide.” The actors then reflected on their favorite moments from their respective shows, such as “the time that Lisa had her own Fashions by Lisa cart at the mall, where she thought she was Donna Summer,” Harry recalled. Elsewhere in the video, Moesha star Marcus T. Paulk confirmed that the additions are coming after fans have “literally been asking for these shows for years and years and years." And Netflix has finally listened.

This news almost makes up for the fact that the long-rumored Sister, Sister reboot is, in all likelihood, dead. Sister, Sister, which ran for six seasons between 1994 and 1999, followed twin sisters Tia and Tamera who are separated at birth. When they have a chance encounter at the mall, Tamera’s adoptive father, Ray, reluctantly allows Tia and her adoptive mother, Lisa, to move into his home so the sisters can be together. While rumors have long swirled about a reboot, Mowry-Hardrict told Bustle in July 2019 that the project had stumbled upon some roadblocks.

“To be honest with you, I hate to pop the balloon, [but] Sister, Sister kind of looks dead right now,” she said at the time, suggesting that there were some legal issues. “There's a lot of hands in the pot, and just trying to clear these hands has been really, really difficult. So it's kind of gotten beyond our control.” Of course, she wasn't ready to rule it out completely. “I always say, never say never,” Mowry-Hardrict added. “Maybe my sister and I will come up with something else to do that will make everybody satisfied or happy.”

Sister, Sister coming to Netflix is definitely something that has made fans on Twitter happy, but that doesn't mean they're not still wishing for a reboot.

Sister, Sister’s addition to Netflix will certainly tide fans over until the reboot situation is sorted out. Until then, we’ll be shopping for denim bucket hats and overalls for our (virtual) watch parties come Sept. 1.

More like this
Ashton Kutcher Wants Danny Masterson “To Be Found Innocent” In Rape Retrial
By Jake Viswanath
All The ’70s Easter Eggs You Missed In 'That ’90s Show'
By Grace Wehniainen
At 28, Debra Jo Rupp Was Living A Much Different '70s Show
By Grace Wehniainen
'The Queen’s Gambit' Season 2 Tweet Wasn’t From Anya Taylor-Joy
By Mary Kate McGrath, Jack Irvin and Grace Wehniainen
Get Even More From Bustle — Sign Up For The Newsletter
From hair trends to relationship advice, our daily newsletter has everything you need to sound like a person who’s on TikTok, even if you aren’t.