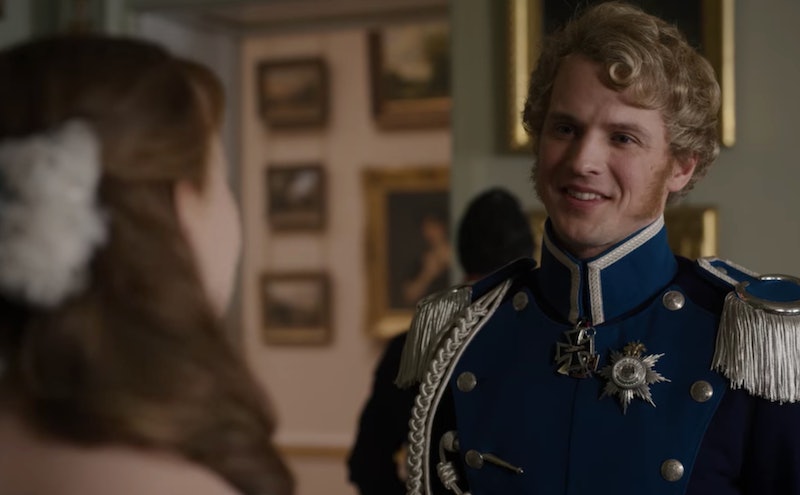 It seems Bridgerton is turning into a Harry Potter reunion of sorts, as yet another actor from the magical franchise has been spotted — this time in a very regal role. First fans noticed that Regé-Jean Page (aka the Duke of Hastings) had an uncredited role in Harry Potter and the Deathly Hallows, now it's Freddie Stroma's turn. Stroma appeared in Bridgerton's third episode as Prince Friederich, a potential suitor for Daphne, and fans were quick to notced the actor also played Cormac McLaggen in Harry Potter and the Half-Blood Prince, as well as in both parts of The Deathly Hallows.

Prince Freiderich couldn't be further from Stroma's Harry Potter character either. While Freiderich, who is the Prince of Russia, is delightfully kind and cordial to Daphne, Cormac is known for being the arrogant Quidditch keeper for Gryffindor and escorting Hermione to Slughorn's party. The latter being a ploy from Hermonie to make Ron jealous by bringing someone who annoyed him the most, which eventually results in Cormac vomiting on Snape's shoes (no thanks to Harry).

"I don't think he's misunderstood at all," Stroma said about Cormac when asked by MTV whether there was more to the character his cringe-worthy advances on Hermoine. "It's funny, because there are different houses and at the end of the day he's a Gryffindor, but he's probably the worse side of Gryffindor that you can have... he's a bit arrogant about the talent he has. I don't think he's really misunderstood, I think he's very confident and really egotistical."

Harry Potter isn't the only major franchise Stroma's been in, either. He appeared as Dickon Tarly in a season six episode of Game of Thrones, as well as in the first Pitch Perfect as Luke. Stroma played another Luke in A Cinderella Story: Once Upon A Song in 2011 opposite Lucy Hale and starred as Adam in UnREAL in 2015.

More like this
Rupert Grint Just Shared A *Major* Update About Ron Weasley’s Future
By El Hunt
Adam Ali Hopes 'Waterloo Road' Will “Subvert” Queer Misconceptions
By Sam Ramsden
Everything To Know About The 'Daisy Jones & The Six' TV Series
By Maxine Harrison and Brad Witter
Yes, 'The Price Of Glee' Is Available To Watch In The UK
By Catharina Cheung
Get The Very Best Of Bustle/UK
Sign up for Bustle UK's twice-weekly newsletter, featuring the latest must-watch TV, moving personal stories, and expert advice on the hottest viral buys.