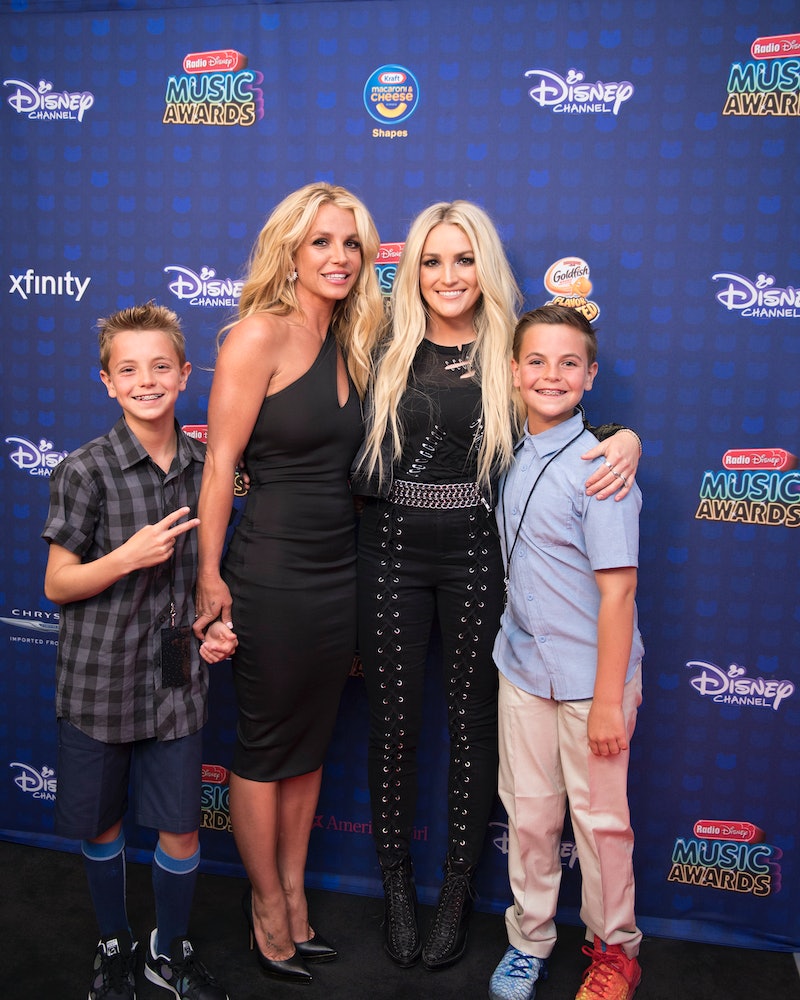 Britney Spears may have been the one celebrating her 41st birthday on Friday, Dec. 2, but that didn’t stop her from posting her own social media tributes, too. In a surprising turn of events, the singer seemed to be extending an olive branch to estranged family members, including her sister, Jamie Lynn Spears, as well as her two teenage sons, Sean Preston and Jayden.

Sharing two solo photos of Jamie Lynn, whom she also credited for the images, in the early evening, Spears said she had her little sister on her mind. “It’s my b-day but you’re my heart so I’m thinking about you … congratulations on being so brave, inspiring, and showing guts and glory in your show,” the “Toxic” singer wrote, likely referencing Fox’s upcoming military-style celebrity reality competition series, Special Forces: World’s Toughest Test. “You ain’t alone … if anybody knows what that feels like … I get it ... My baby sister !!! I love you !!!”

Though Jamie Lynn has yet to publicly respond, the sisters’ strained relationship has been well-publicized in the year since a judge terminated Spears’ conservatorship. While the younger sibling was promoting her memoir, Things I Should Have Said, in January, a few bitter social media exchanges ensued, and Spears’ attorney Mathew Rosengart ultimately sent Jamie Lynn a cease and desist letter demanding she stop speaking about his client in the media. Meanwhile, Jamie Lynn’s lawyer Bryan Freedman fired back in his own letter, calling out the “vile statements” Spears posted on social media, per TMZ.

Several hours later, Spears turned her attention to her sons with ex-husband Kevin Federline. “To both of my boys … I love you … I would die for you !!!” she wrote, using the same caption on two separate posts honoring Sean Preston, 17, and Jayden, 16. “God speed my precious hearts !!! I would give anything just to touch your face !!! I send my love … Mamasita.”

In a September interview with filmmaker Daphne Barak, the boys discussed their fractured relationship with their mom. Among the claims Jayden made was that Spears “struggled” to give them equal love and attention; he said his brother bore the brunt of her frustration. Posting a lengthy Instagram statement on Sept. 1, Spears responded to Jayden’s comments from the ITV interview.

“I say to my son Jayden that I send all the love in the world to you every day for the rest of my life,” she wrote, adding that she “tried [her] best,” despite the restraints of her 13-year conservatorship. “My love for my children has no boundaries ... and it deeply saddens me to know his outcry of saying I wasn’t up to his expectations of a mother.”

Even though Spears was “sick with the flu” on her birthday this year, she still had some happy moments, too, courtesy of Sam Asghari. “My husband surprised me … he was pretty f*cking smooth,” she captioned a video showing a setup complete with roses, candles, balloons, and, of course, birthday cake. “I love you!!!! It’s Mr. and Mrs. Asghari ... !!!”

Notably, the cake was topped with a candle in the shape of a number one, and Asghari wrote, “Happy 1st birthday baby,” in a caption. Perhaps a new year truly is a time for new beginnings.

More like this
Britney Spears Shares & Deletes Photos Of Justin Timberlake From 22 Years Ago
By Jake Viswanath
Britney Spears Shared The Real Reason She Shut Down Her Instagram Account
By Brad Witter
20 Years Ago, J.Lo Was Supposed To Kiss Madonna With Britney At The VMAs
By Jake Viswanath
Cruz Beckham Teased New Music With An Adorable Nod To Mom Victoria Beckham
By Stephanie Topacio Long
Get Even More From Bustle — Sign Up For The Newsletter
From hair trends to relationship advice, our daily newsletter has everything you need to sound like a person who’s on TikTok, even if you aren’t.