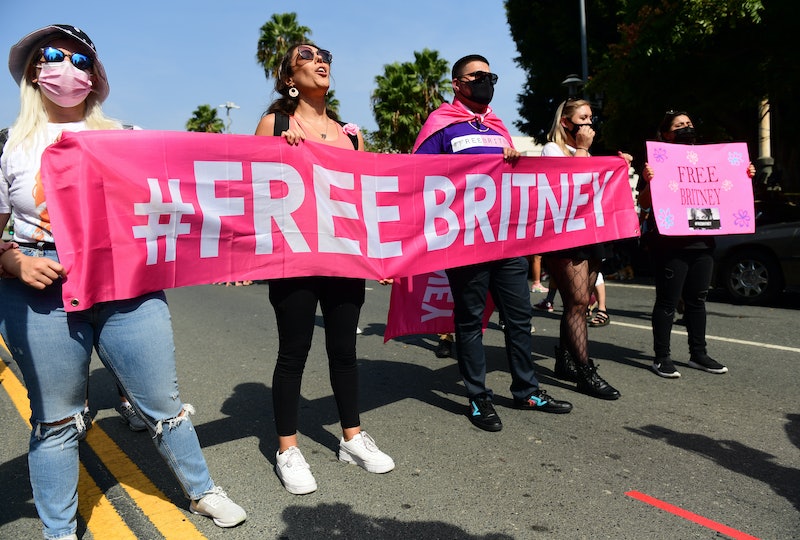 Britney Spears is a free woman. In a court hearing on Nov. 12, Judge Brenda Penny finally terminated Spears’ conservatorship, which she’s lived under since 2008, The New York Times confirmed. Now, Spears is finally in control of her own life and will not have to answer to any conservator in order to get married, have children, or make other personal decisions. In addition, the conservatorship over Spears’ estate was also lifted, meaning Spears is now in charge of her own finances again. “The conservatorship of the person and estate of Britney Jean Spears is no longer required,” Judge Penny declared in court.

After the hearing, Spears’ attorney Mathew Rosengart spoke outside of the Los Angeles courthouse, officially announcing the news to revelers and reporters. "Judge Penny today decided to agree with Britney Spears,” he stated, as reported by Variety. “As of today, effective immediately, the conservatorship has been terminated as to both the person and the estate.” Rosengart also confirmed that the court did not require a mental evaluation to end the legal arrangement, which Spears requested in her June court hearing. “We believe it was the right result,” he said.

Spears is now fully in control of her life for the first time in over a decade, but in the hearing, Rosengart told the judge that he filed a termination plan on Nov. 8 that will remain sealed, saying his firm has worked with Spears to provide a “safety net” as she takes her first steps of freedom. According to Variety, the temporary conservator of Spears’ estate, John Zabel, will continue working with Spears and retain “limited and administrative power” as outstanding financial matters are resolved. “We have engaged in an orderly transition of power,” he said.

Rosengart reiterated this sentiment outside of the courtroom. “What's next for Britney, and this is the first time this could be said for about a decade, is up to one person: Britney,” he said to resounding cheers from fans. “I will say that Britney has been put into a position through our collaboration in the work of our law firm to succeed. We have a safety net put into place for Britney, both on the personal side and on the financial side, as those of you who are in court understand. But Britney, as of today, is a free woman, and an independent woman. And the rest, with her support system, will be up to Britney.” When asked by fans if Spears would perform again, Rosengart repeated that it’s only up to Spears herself.

Spears’ freedom has been a long time in the making. The singer has been fighting to end the conservatorship privately in court for years, but fans started to take notice after suspecting that she was forced to check into a mental health facility in April 2019, kickstarting the monumental #FreeBritney movement. In June, Spears spoke out against the conservatorship publicly for the first time in an emotional court testimony, confirming that she was allegedly held at the facility against her will and accusing her then-conservator, father Jamie Spears, of “conservatorship abuse,” among other shocking allegations.

The journey to free Spears from her conservatorship became clear when Judge Penny granted her the ability to hire her own lawyer in July. Just weeks later, after he was hired by Spears, Rosengart started acting by requesting Jamie’s suspension from the conservatorship. Jamie responded by changing his tune about the necessity of the conservatorship and asking the court to end it, which Rosengart suspected was to avoid investigation. In the end, the singer won out, as Jamie was permanently suspended as her conservator on Sept. 29, with the court ordering him to turn over all assets and documents pertaining to his time as conservator.

Minutes after the hearing, Spears took to Twitter and Instagram to commemorate her victory, posting a video of fans celebrating outside of the courthouse and sharing her gratitude for them. “Good God I love my fans so much it’s crazy !!!” she wrote. “I think I’m gonna cry the rest of the day !!!! Best day ever … praise the Lord … can I get an Amen ????” She ended her post with the immediately iconic hashtag #FreedBritney, signifying her freedom.

Later in the day, Spears shared her elation once again on Instagram, posting a selfie of her in a bright yellow dress to reflect her joy. “I can’t freaking believe it !!!!” she wrote. “Again … best day ever !!!! Her fiancé Sam Asghari also celebrated the verdict, simply posting an image with the word “Freedom” on Instagram. “History was made today,” he wrote. “Britney is Free!”

Earlier this week, she took to Instagram to share her feelings about the hearing and said she was praying for a good outcome. “This week is gonna be very interesting for me,” she wrote. “I haven’t prayed for something more in my life!!!” The night before the hearing, Asghari posted a video of them sporting #FreeBritney T-shirts, marking the first time that the singer has ever worn one.