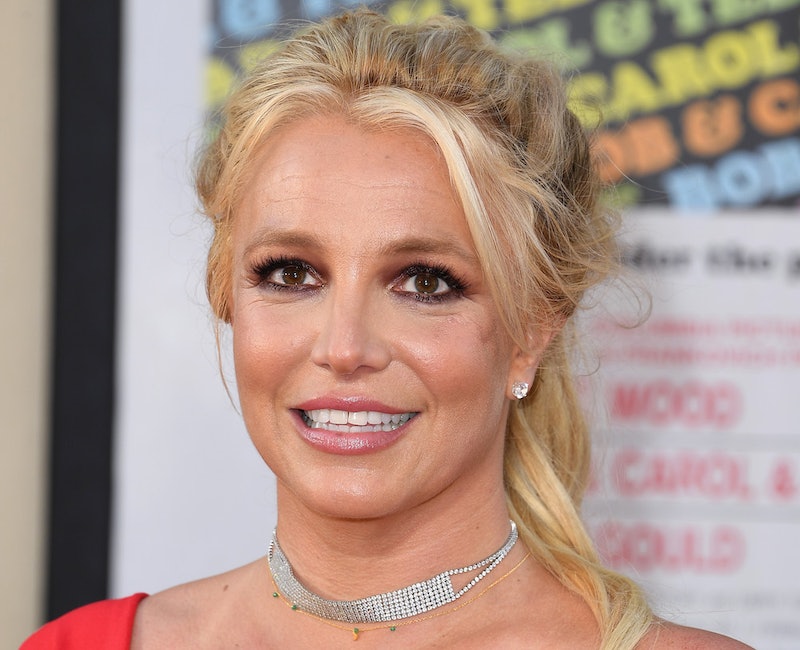 According to new court documents, pop star Britney Spears wants her father Jamie Spears removed from her conservatorship for good. Per a new report published by TMZ on Aug. 18, Spears filed court documents asking for her father to be permanently replaced by Jodi Montgomery as the conservator of her estate. Montgomery was assigned to be her temporary conservator last September after Jamie stepped down for “personal health” reasons. The document also reportedly states that Spears no longer wants her father to be the sole handler of her finances, and instead wants a "qualified corporate fiduciary" — most likely a bank, according to TMZ — to manage her finances. Bustle reached out to Spears’ attorney for comment, but did not receive an immediate response.

Spears has been under conservatorship since 2008, after a series of public breakdowns. Under a conservatorship, the pop star has been stripped of control over her own financial and business affairs. The singer cannot make key personal or financial decisions without the approval of her conservators, something that has raised eyebrows among fans. Essentially, since 2008, her father Jamie has been in control of her finances, as well as her estate and career negotiations. Reports of Spears' lack of personal autonomy have been son extreme that they sparked #FreeBritney, a viral social media movement in which the pop star’s ardent fans have called for an end to the conservatorship via rallies and social media posts, citing theories (and recent unusual social media posts) that claims Spears’ father is manipulating her to control her estate.

Spears’ father, for his part, called the movement “a joke” in an interview with the New York Post on Aug. 1. “All these conspiracy theorists don’t know anything,” he said. “The world don’t have a clue. It’s up to the court of California to decide what’s best for my daughter. It’s no one else’s business.” He added of his daughter’s finances, “I have to report every nickel and dime spent to the court every year. How the hell would I steal something?” As for Spears, the singer has never really addressed the conservatorship, but she did allude to it in her 2008 documentary Britney: For the Record. "If I wasn’t under the restraints I’m under, I’d feel so liberated,” Spears said. “Even when you go to jail, you know there’s the time when you’re going to get out. But in this situation, it’s never-ending."

According to TMZ's report, Spears’ attorney said that a “major overhaul” of her conservatorship is needed in order to reflect her current lifestyle and wishes. The pop star's next scheduled court hearing is set for tomorrow, Aug. 18, to discuss the matter further.