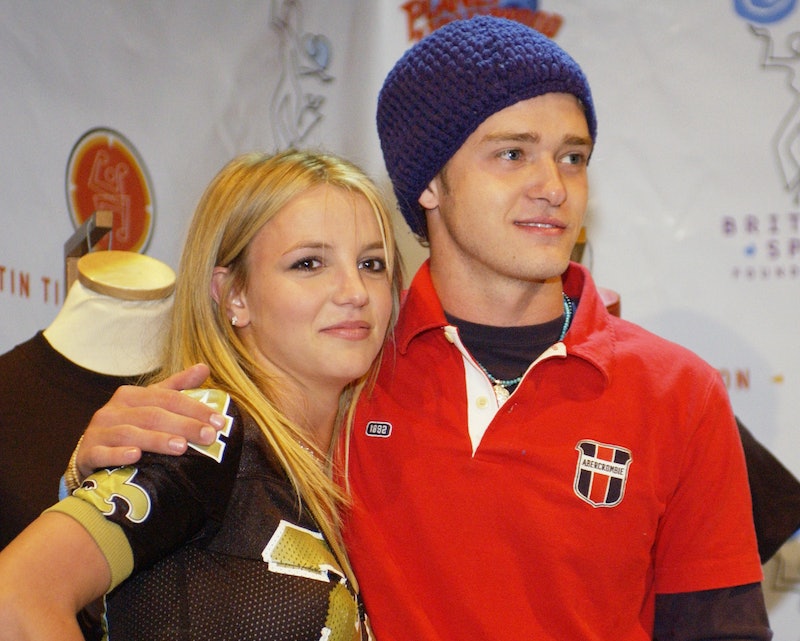 It's been twenty years since they called it quits, but Britney Spears still has a lot of love for Justin Timberlake — especially on Instagram. The singer posted one of her now-famous dancing videos on Jan. 28, but this time she tagged her famous ex in the post and essentially sent the entire Internet back in time to the early aughts. In the clip, she danced to "Holy Grail," Timberlake's collaboration with Jay-Z, while wearing a cropped turtleneck and short shorts.

"Danced in my black 🐢 neck last week to HOLY GRAIL !!!!" she captioned the post, which featured some of the highlights from her improvised dance routine. "I KNOW ... turtle necks are SO ME." After adding some more emojis — including a laughing face and the dancing lady — Spears also tagged Timberlake in the caption. "Britney with the @ tags!! We love to see it!" Selling Sunset star Chrishell Stause commented. So far, Timberlake himself has not commented on the video.

This is not the first time Spears has referenced the former *NSYNC member on Instagram — or danced to his music. In April, the singer posted a video of herself twirling in the backyard set to his 2018 single "Filthy." Joking that the video was "my version of Snapchat or TikTok or whatever the cool thing you're supposed to do these days," Spears explained that she couldn't help but dance to Timberlake's "genius" music.

"PS I know we had one of the world's biggest breakups 20 years ago …… but hey the man is a genius !!!!" Spears wrote at the time, even shouting out her ex for making such a good track. "Great song JT !!!! Pssss if you KNOW WHAT'S GOOD!!!!!!" The love was clearly mutual; according to Instagram account Comments by Celebs, Timberlake commented on her video with a series of laughing and raised hands emojis.

Despite their dramatic split in 2002, Timberlake and Spears have had nothing but nice things to say about each other in the years since. In August 2016, the "Toxic" singer even told reporters that she would "love" to collaborate with him on some new music. "I would love to work with… Aerosmith seems really good and bright. He's a genius, I think, and he's very rock 'n' roll and he sings from his soul," she said. "Gwen Stefani, I think she's great. Justin Timberlake is very good."

In July 2020, Timberlake told GQ Australia that while he and Spears no longer speak, he's still rooting for her success and happiness. "I wish her well, and I want to see her win," the singer said, seemingly referencing the ongoing legal issues with her conservatorship. "I don't think you can ever count somebody like her out. Because she may appear one way, but she's very clever."

More like this
Britney Spears Celebrated Her Birthday With Loving Messages To Jamie Lynn & Her Sons
By Brad Witter
The Britney Spears Disney Princess Musical Is Finally Opening On Broadway
By Jake Viswanath
You’ve Been Singing The Wrong Lyrics To “All I Want For Christmas Is You”
By Sam Ramsden
17 Photos Of The 'Wednesday' Cast Vs. The 1991 'Addams Family' Cast
By Grace Wehniainen
Get Even More From Bustle — Sign Up For The Newsletter