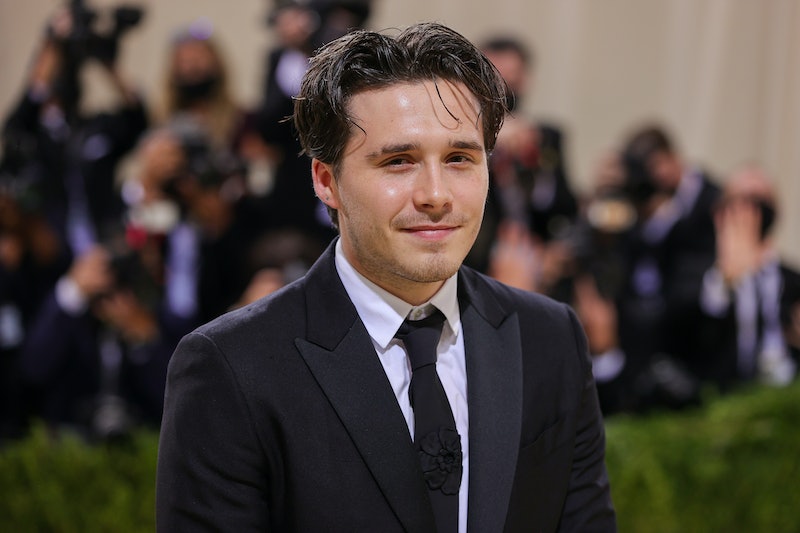 Over lockdown, Brooklyn Beckham debuted his newfound love of cooking to his Instagram page, and the 22 year old has continued to impressed fans with homemade pasta dishes and risotto-making with his dad, David Beckham. In a new video for Vogue, the eldest child of the Beckhams showed off more of his cheffing skills when he cooked a cheese-heavy lunch for his fiancé Nicola Peltz — and the wholesome watch makes me both happy and hungry at the same time.

In the 12-minute clip — where Beckham spends 30 seconds trying to split open a massive cheese wheel — he makes cheesy pasta (with fresh, handmade tagliatelle, FYI), broccolini, and a sugary pecan pie, which Peltz confirms is “very good” (although she had to pop a Lactaid tablet first).

While cooking the delicious-sounding meal, Beckham revealed some wholesome family secrets, including that his footballer-legend dad David does most of the cooking at his family home, adding that mum Victoria “just likes to eat.”

He also revealed that little sister Harper Seven is the “harshest critic, by far” in the Beckham household, meanwhile, his parents have strict rules for their dinner times.

“Growing up in my family, growing up in England, when it was dinnertime it was a very strict no TV, no phone type of rule," said Beckham.

Promoting his new eight-episode weekly cooking show, Cookin’ With Brooklyn, that launches on Watch Together via Messenger, the photographer-turned-cooking enthusiasts also shared that living in the U.S, has made him more mindful about what he eats compared to growing up in England.

“Growing up in England, there’s not much eating healthy there’s lots of fish and chips, bangers and mash, really unhealthy food, but great food” he says.

The video provided many loved-up moments between Brooklyn and his fiancé Nicola Peltz, who got engaged in July 2020. In response, viewers on Youtube have praised the celeb from being “very down to earth” and seeming like “he was raised very well,” where as others commented “Cooking just upgraded this man”

More like this
Ben & Jerry’s New Sundae Flavours Are A Chocoholic’s Dream
By Sophie McEvoy
'Bridgerton' S3 Will Show A *Very* Different Side To Kanthony
By Sam Ramsden
Twitter Is Burning As Phoebe Dynevor Reveals Daphne’s 'Bridgerton' Exit
By Sophie McEvoy
Helena Bonham Carter Doesn't Think 'The Crown' “Should Carry On"
By Sam Ramsden
Get The Very Best Of Bustle/UK
Sign up for Bustle UK's twice-weekly newsletter, featuring the latest must-watch TV, moving personal stories, and expert advice on the hottest viral buys.