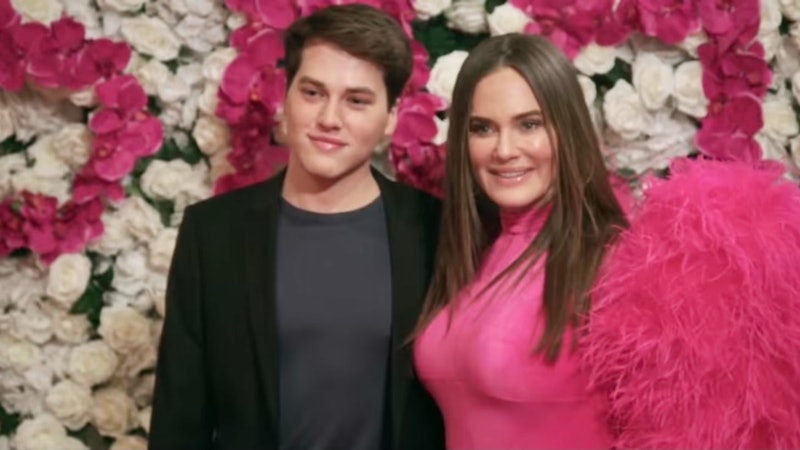 Real Housewives of Salt Lake City star Meredith Marks' son Brooks made his debut as the youngest designer at Park City's inaugural Fashion Week in 2019. "To be a part of the first-ever Park City Fashion Week — it’s incredible to be a part of any fashion show, but to be able to have that opportunity to be a part of history was just beyond," he recently told Page Six, admitting that he "did not realize how much goes into a fashion show" at the time.

Brooks released the second collection of his clothing line, which consisted of tracksuits emblazoned with his name (and came with branded masks and key chains), in November, and will launch his Fall/Winter 2020/2021 collection the evening of Dec. 23, so keep your eyes peeled on his website if you want to snag it for yourself. As far as his designs, Brooks told Page Six that he wants "to create a universal brand that could be appealing to everybody" — and that comfort is key. "Aside from my clothing being comfortable to wear, I want people to feel comfortable in it," he said. "The tracksuit isn't just for one body. It’s really genderless and it’s for everyone."

Brooks added that it was Meredith — a jewelry designer — who inspired him to pursue a career in fashion. "I remember when I first started my brand, my mom always told me to keep it authentic and true to myself in order for it to be successful," he said.

Brooks' father, Seth Marks seems to be equally supportive. In a late 2019 LinkedIn post, Seth celebrated the "young scrappy boujee" designer's "first collection of swag-wear," which he noted his son created "while juggling final exams at an educational institution he earned his way into." He also joked that Brooks "optimizes a budget" better than he does.

Brooks also already has some high-profile Bravo fans: RHOSLC's Jen Shah wore a jumpsuit he created on the show, and Heather Gay and Lisa Barlow both support him on his brand's Instagram page. RHOC's Braunwyn Windham-Burke also commented "love" on an Instagram photo of Brooks wearing his own design.

Surely it's only a matter of time before another Bravolebrity shows up onscreen in one of Brooks' designs.